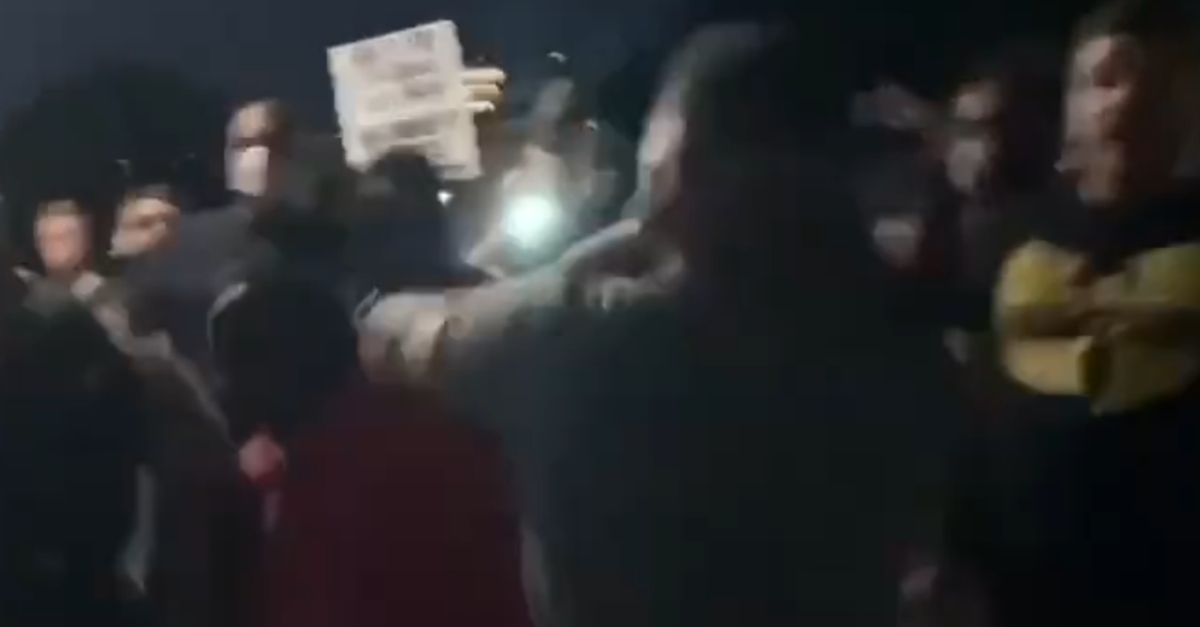 As seen on video, a man struck a woman during a pro-choice protest outside of the Rhode Island State House in Providence on Friday night. Jennifer Rourke, the Rhode Island Political Cooperative Chairwoman and a Democratic candidate for the state Senate, says she is the woman in that footage. Her attacker was her Republican opponent Jeann Lugo, she said.

Lugo, an officer for the Providence Police Department, has announced that he dropped out of the race for Senate District 29. He was off-duty at the time of the incident, officials said. Lugo now faces charges and is on paid administrative leave from the department.

Other Twitter users either tagged or quote-tweeted him when referring to the incident from Friday, but his account is defunct as of Sunday afternoon.

“I’m a reproductive rights organizer & State Senate candidate,” Rourke tweeted on Saturday. “Last night, after speaking at our Roe rally, my Republican opponent – a police officer – violently attacked me. This is what it is to be a Black woman running for office. I won’t give up.”

This is what it is to be a Black woman running for office. I won’t give up.pic.twitter.com/ZREDP2dvXY

The incident on Friday follows hours after the U.S. Supreme Court overturned its landmark ruling in Roe v. Wade. Now states can outlaw abortion, and some already have due to pre-Roe bans or so-called “trigger laws.” Many of those trigger laws will go into effect 30 days after the new ruling in Dobbs v. Jackson Women’s Health Organization.

Hundreds attended the protest on Friday outside the State House, according to The Providence Journal. The outlet described it as largely “without incident,” but they said conflict popped up after apparent counterprotesters arrived.

“I’m not going to deny,” Lugo told the Journal regarding whether he punched Rourke. “It was very chaotic, so I can’t really tell you right now. Everything happened very fast.”

“I stepped in to protect someone that a group of agitators was attacking,” he wrote in an email to The Washington Post. “At this moment, there’s a pending internal investigation, and as the facts of the incident come to light, I request that my family and I have privacy.”

The Providence Police Department identified Lugo “as the off duty officer involved in this incident.”

“The PPD is criminally investigating the behavior of an off duty officer last evening during a protest where a female was assaulted,” they said. “The officer has served for 3 yrs and placed on administrative leave w/pay this morning, pending a criminal investigation and administrative review.”

Lugo was arraigned Saturday for simple assault and disorderly conduct. He was released on his own recognizance and scheduled for a hearing to take place July 8, according to police in the Journal report.