QAnon Supporter Allegedly Fired Paintballs at Army Reservists, Yelled ‘This Is for America’ 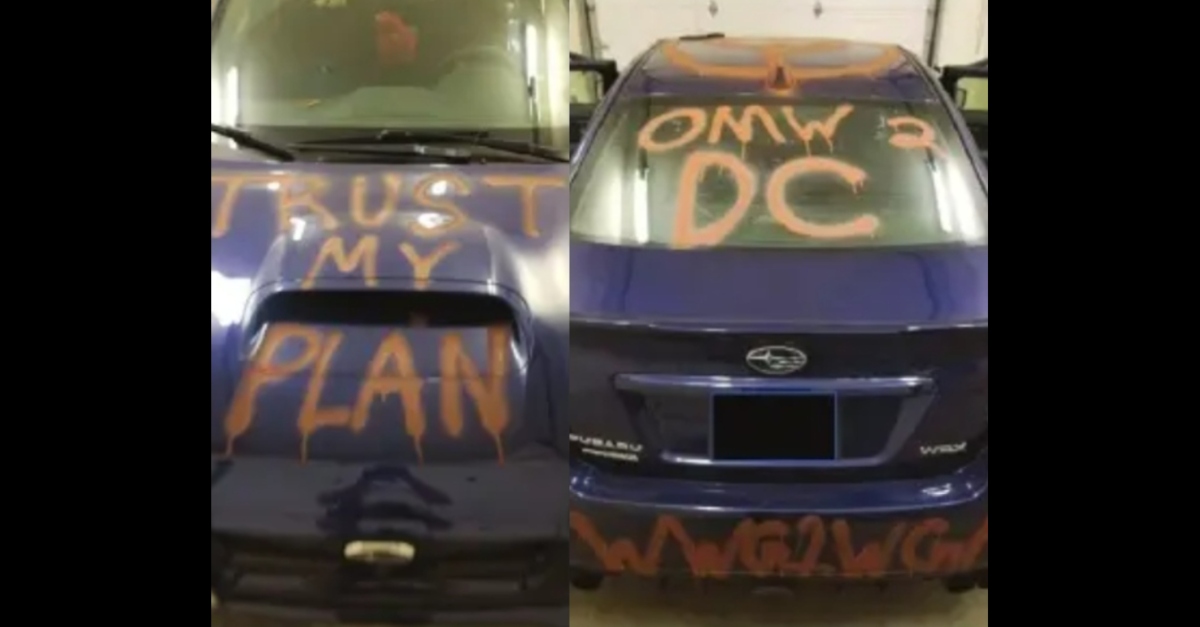 A QAnon supporter allegedly fired paintball rounds at Army reservists at the Wisconsin Army Reserve Center in Pewaukee on Monday, authorities said. Defendant Ian Alan Olson, 31, drove a Subaru covered in spray-painted QAnon slogans, stepped out, yelled “This is for America,” and shot two or three rounds from an AR-15 style gun, according to the affidavit from the Federal Bureau of Investigation (h/t The Daily Beast).

That was not the end of it. Authorities said Olson was booked into the Waukesha County jail on state charges. Olson allegedly said he just came back from Washington D.C., having tried to deliver a message there.

His sedan featured spray-painted message like the letter Q on the passenger-side doors, “Trust my Plan,” on the hood, “WWG1WGA” (meaning the QAnon slogan “where we go one, we go all”) on the rear bumper, and “OMW 2 DC” on the rear window. Federal investigators said this last one was an apparent reference to the nation’s capital. According to the FBI, reports from the U.S. Capitol Police showed officers transported him for psychiatric evaluation earlier this month after he made several disturbing statements on March 3.

On March 3rd, Olson approached a National Guardsman, stating he was “maybe going to do something crazy stupid tomorrow” and asked them not to shoot him. Shortly thereafter, USCP stopped Olson, who said he wanted to “test the National Guard tomorrow to see if they were loyal to the people or to the President.”

Olson allegedly reasoned that if the National Guard shot him, he would know they were loyal to the President [ostensibly new POTUS Joe Biden]. They would be loyal to the “people” if they did not shoot him. From the complaint:

Federal investigators asserted he broke laws that prohibited attacks on U.S. serviceman on account of service, and assaulting, resisting, or impeding certain officers or employees. State records viewed by Law&Crime show a not guilty plea was entered on Tuesday for two counts of attempted battery, and one count of disorderly conduct.