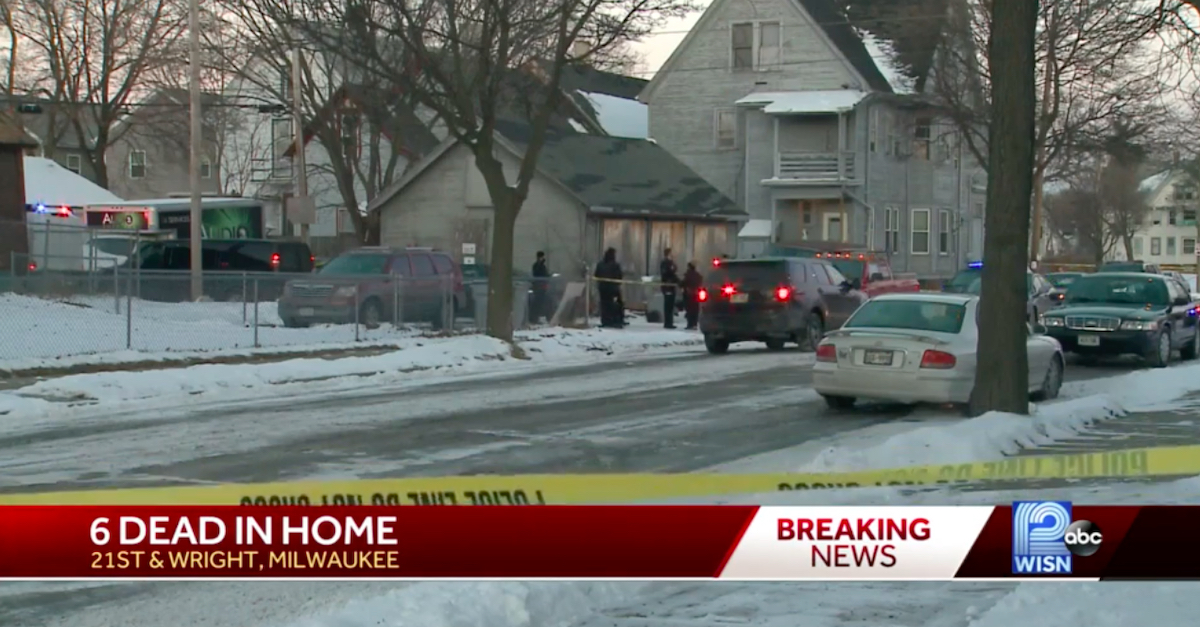 The scene outside of the Milwaukee home where six dead bodies were discovered.

Law enforcement authorities in Wisconsin over the weekend discovered six dead bodies in a Milwaukee home, and all of the deaths are being investigated as homicides, the county medical examiner announced early Monday morning.

Milwaukee County Chief Medical Examiner Dr. Brian Peterson confirmed on Twitter that five adult males homicide victims and one adult female homicide victim were found inside the home. Peterson said his office would be performing autopsies on the bodies Monday to confirm the cause and manner of the victims’ deaths, but authorities did say the deceased had been shot.

The Milwaukee Police Department on Sunday evening initially announced that officers responding to a request for a wellness check on a home located on North 21st Street near West Wright Street found five dead bodies inside the residence. The discovery of the sixth body was announced approximately 16 hours later.

Assistant Milwaukee Police Chief Paul Formolo said that officers arrived on the scene at approximately 3:45 p.m. to conduct a routine welfare check before walking into the grisly scene.

“Citizens of our community had concerns with the occupants that resided there. It’s a normal call for us to respond to. We do it all the time,” Formolo told reporters during a news conference, per Milwaukee CBS affiliate WDJT-TV. “Upon their arrival, entry into the residence was made, and five individuals were found deceased,”

The Milwaukee Journal Sentinel reported that the victims have not been identified, but said that the ages of three of the male homicide victims were 31, 42, and 43.

Formolo reportedly said that investigators do not currently have a lot of information of the victims or possible suspects.

“At this time, the motive and information regarding any involved suspects is not known to us right now,” he reportedly said, but added that there was “no information” to suggest that there was an ongoing threat to the community.

Milwaukee ABC affiliate WISN-TV reported that authorities did not recover a weapon from the scene.

Arnitta Holliman, the director of the Milwaukee Office of Violence Prevention, also spoke to reporters from outside the home where the bodies were discovered and indicated that the homicide victims had been shot.

“This is ridiculous, I’m sorry I don’t know a better word to say,” Holliman said. “The community is tired. We are tired of seeing peoples’ lives snuffed out too soon in preventable situations. This is absolutely preventable—any of the gun violence that we’re seeing is preventable—and we cannot continue the same trajectory that we’ve had for the last two years.”

“The murders discovered today on a residential block in the heart of our city are horrific,” Acting Milwaukee Mayor Cavalier Johnson said in a statement. “A horrible crime has again occurred, and it is not a movie or a fictional account. These victims died in our city, in one of our neighborhoods. We remain steadfast in our efforts to reduce violence. We will achieve that through strengthened and improved law enforcement, through community intervention, and through a renewed commitment to prevention.”