Pa. Pizzeria Owner Shot Business Partner Boyfriend in Head with ‘LadySmith’ Revolver, Hid Body for Weeks, and Told His Son in Italy He Was ‘Away on Business’: DA 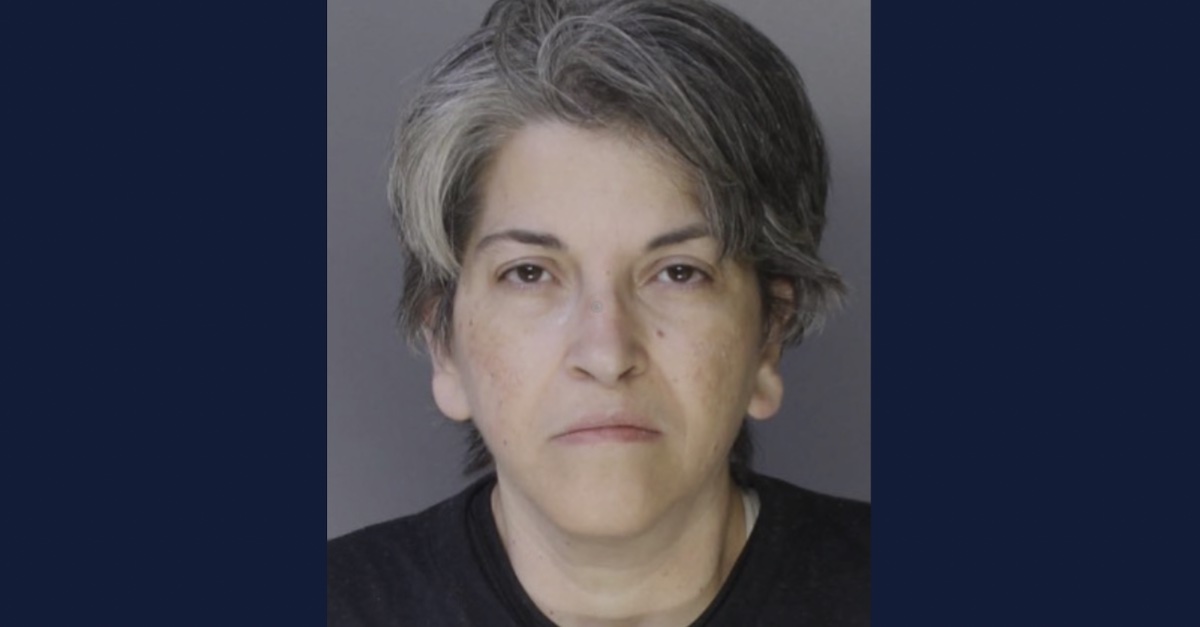 A Pennsylvania pizza owner is accused of brutally murdering her business partner and boyfriend, described by authorities in some places as the defendant’s “paramour” and common law husband. While Anna Maria Tolomello, 48, is accused of murdering 65-year-old Giovanni Gallina in their home with a Smith & Wesson .38 Special “LadySmith” revolver, the defendant allegedly blurted out without being prompted that she opened fire in self-defense.

But authorities in Bucks County say that Tolomello “wrapped up” the victim’s body in their master bedroom and hid the remains for 13 days — all the while allegedly providing increasingly unsatisfactory answers about Gallina’s whereabouts to Phillip Gallina, the victim’s son who lives in Italy.

Based on the criminal complaint, a combination of the concerned son reaching out to law enforcement and a “cooperating subject” (CS) proved to be crucial for the investigation by Hilltown Township Police and Bucks County detectives.

The Bucks County DA’s Office said the investigation began when Phillip Gallina said he had not heard from his father, with whom he almost daily communicated via WhatsApp. The son said that Tolomello provided explanations about his father being “away on business” that did not add up. For instance, Phillip told police that the defendant said his father left his cell phone at the pizzeria, and that he left for business but did not say where he was going or for how long.

The son said he last heard from his father on March 16. By March 29, it was clear that law enforcement was watching Tolomello.

Tolomello not only paid CS $350 in cash to help dig a hole on her home’s property  — a hole which just happened to be long, wide, and deep enough to be a shallow grave (7x3x3) for a 5’6″ adult male — but she was also surveilled and even audio recorded on March 29 telling CS “He [Gallina] is away,” documents said. 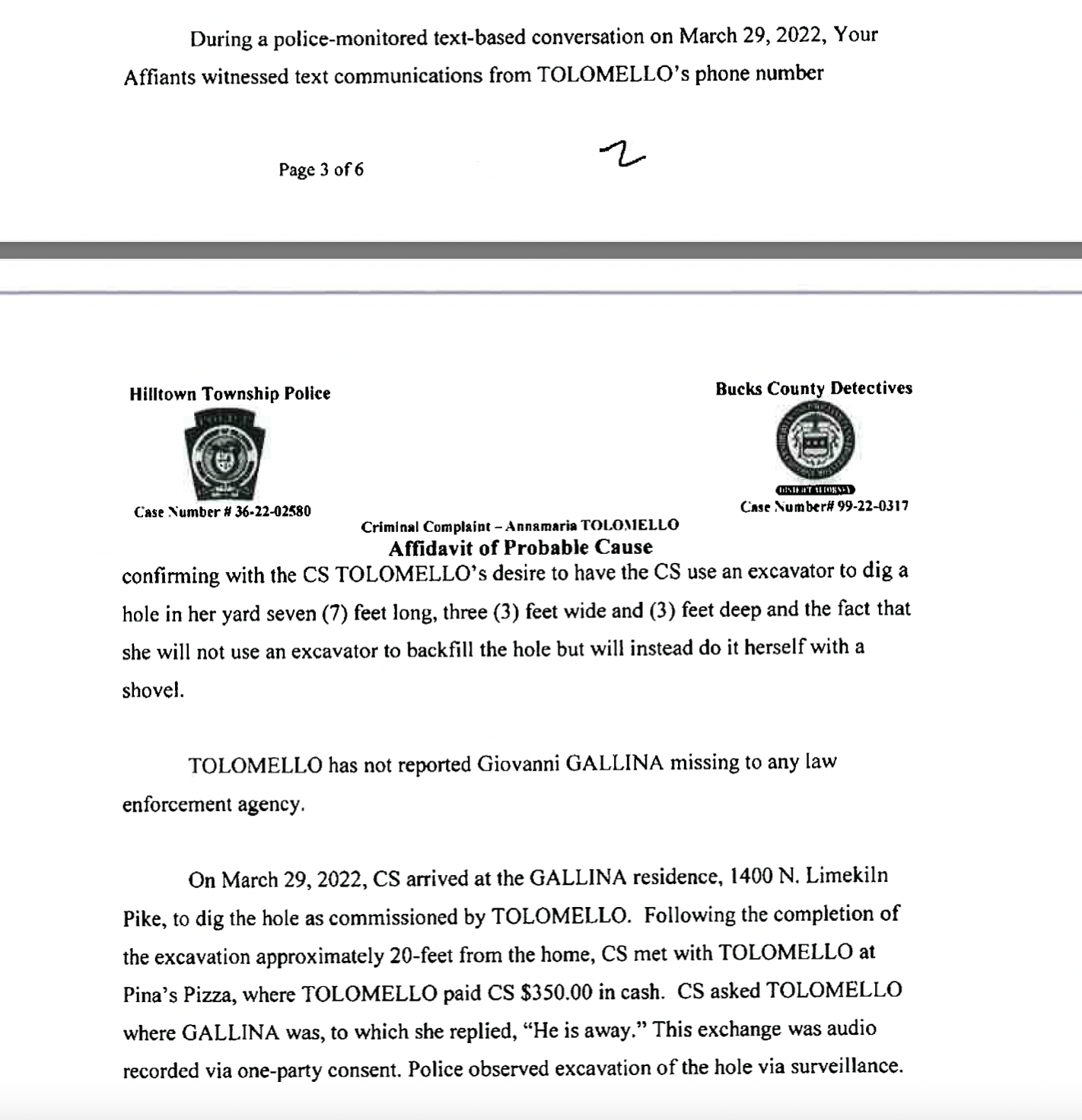 Tolomello allegedly asked someone else 11 days earlier on March 18 if they had “any tricks” or tips on how to deal with a “skunk in her garage,” documents said. That is two days after Tolomello is accused of murdering Gallina, co-owner of Pina’s Pizzeria in Chalfont. Authorities said that employees also noticed Gallina hadn’t been seen “in a while.”

On March 29, authorities executed a search warrant at the defendant’s home. They say that Tolomello declared her self-defense without being asked for an explanation by law enforcement.

That’s when police found the body, wrapped in a “bundle.”

Cops said they cleared the scene, and then Tolomello waived her right to a lawyer and voluntarily agreed to an interview. Authorities said that the defendant admitted to everything except murder. She claimed she shot the victim in “in his left temple while he was strangling her in the bed inside their master bedroom.”

Tolomello allegedly admitted all of the following: that she lied when she told law enforcement the 7x3x3 hole was for a dog; that the skunk problem she claimed to have in her garage was actually an issue with the odor of her boyfriend’s decomposing remains; that she planned to pave over the would-be grave she had dug; that she removed a bloody mattress, took the mattress to her pizzeria, and threw it out in a dumpster; that she tried to clean the crime scene; that she used a Smith & Wesson .38 Special “LadySmith,” a revolver designed for women; that the gun was in a loner vehicle in her driveway.

The next day, authorities “removed the aforementioned large bundle wrapped in a blue tarp and comforter.”

“The bundle was opened and detectives found the body of a deceased white male of the same age as Giovanni GALLINA, wrapped in bed clothes which were saturated in blood and the head of the body was covered with a black, plastic garbage bag. Bucks County Coroners personnel found injury on the upper left side of the decedent’s head which was consistent with an entry bullet wound,” the complaint said.

Google reviews of Pina’s Pizza appear overwhelmingly positive at 4.4 out of 5 over 230-plus reviews — and several customers have even praised the defendant by name.

“Great people and great food. Anna is the best. My sister in law had her great Dane with her and they came right outside with water in a container for him,” one customer said.

“Great food and Ann’s and her husband and are awesome 👌,” said another customer.

“Anna Maria treats us better than as if we were family. And the food is excellent,” said a third customer.

“Love all the food. Ann Marie should start her own server school. NOBODY is as good a server as Ann Marie,” said a fourth.

A fifth person noted that the pizzeria is “family owned frim [sic] Italy.”

“Maria and Giovanni go out of their way,” the customer said. “The most important and impressive Maria remembers your name, drinks and favorite dishes. Kid friendly, great place for pizza, eggplant, calzones actually everything is delicious.”

Tolomello was arraigned Wednesday. She was held in lieu of bail on charges of abuse of a corpse, tampering with evidence, possession of an instrument of a crime, and criminal homicide, the Bucks County DA’s Office said. A preliminary hearing was set for April 19.