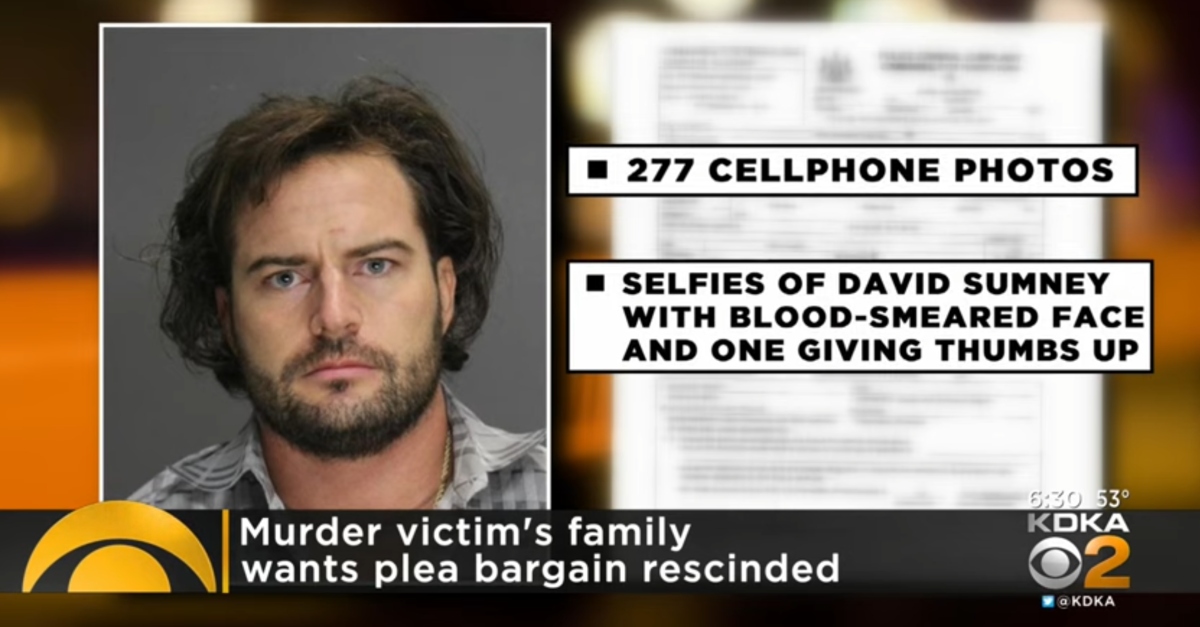 A Pennsylvania man was sentenced to 20-to-40 years in prison for beating his mother to death. Authorities have said that defendant David Sumney, 33, took 277 pictures, including selfies, amid the grisly incident. Most of the family, including his half-sister Ellen, opposed the plea deal that saw prosecutors drop charges including first-degree murder for him killing mother Margaret Sumney.

“You broke her back,” Ellen said, according to The Daily Beast. “You paralyzed our mother. And then you just beat her and beat her. The blood was splattered along the walls. But I think the sickest part is the pictures. The 277 pictures. You only take pictures if you want to go back and see what you did.”

The defendant allegedly tortured and killed his mother, and put her body in a bathroom sometime before Sept. 1, 2019.

David Sumney’s lawyer, who reportedly sought seven years in prison for his client, argued that the killing was due to drug and alcohol use.

Ellen told the Daily Beast that was “ridiculous.”

A defense expert said that the defendant had taken a very high dose of Adderall, causing diminished mental capacity. Two jail staffers testified that defendant Sumney was a model inmate and participated in Bible studies with other prisoners.

Margaret’s older sister Mary Ellen said David Sumney was “less than a piece of trash.” She wanted him to be sentenced to death. He would have only faced life in prison if convicted as charged of first-degree murder.

“I cannot believe I would let myself get in such a state where I could do something so bad, so horrible,” defendant Sumney said in court on Thursday. “I cannot believe what I did, that I killed my own mother. I cannot stop thinking about it. I think about it every day. I’m sorry, but sorry doesn’t cut it. I handled things as badly as a person could have.”

He reportedly faces a pending case for allegedly waterboarding and strangling an ex-girlfriend in a hotel room in July 2019. She survived.