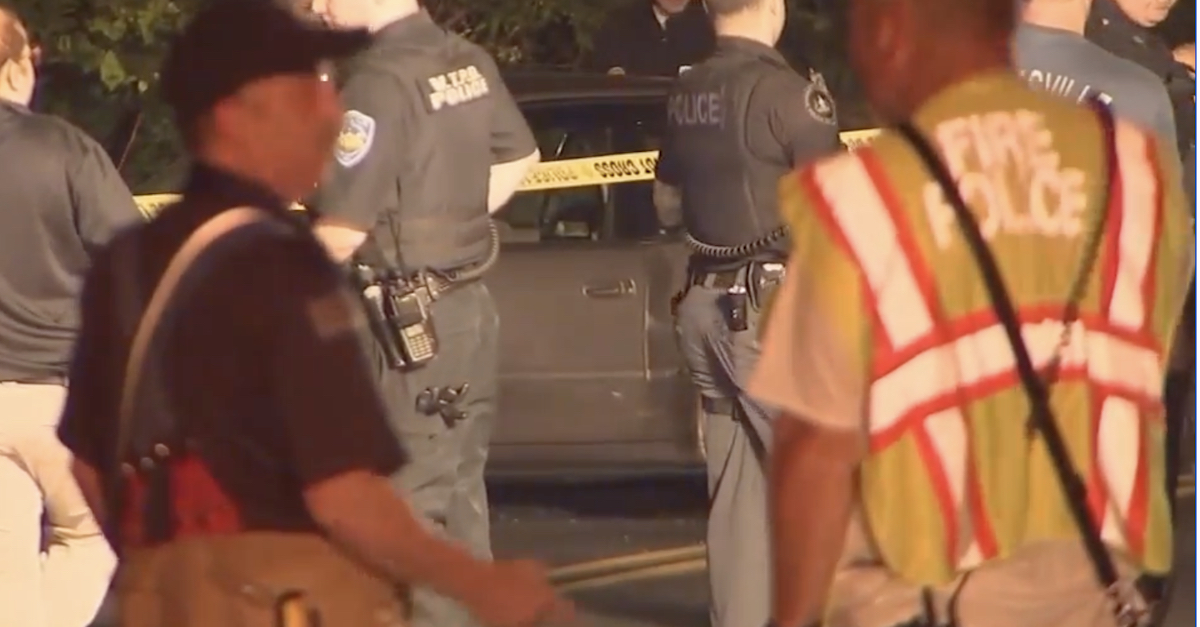 Police at the scene where Mamadou Kallie allegedly shot and killed two women. (via WPVI)

A 23-year-old man in Pennsylvania was arrested over the weekend for fatally shooting two women and an unborn child, according to local law enforcement authorities.

Mamadou Kallie, of Coatesville, was taken into custody on Sunday and charged with a slew of felonies, including criminal homicide, first-degree murder, third-degree murder, and murder of an unborn child.

According to a press release from the Chester County District Attorney’s Office, officers with the Coatesville Police Department responded at approximately 9:21 p.m. on May 29 to a 911 call concerning a domestic dispute at a home located on Mount Pleasant Street. Upon arriving at the home, first responders spoke to the victim and Kallie before clearing the scene, the DA’s office said.

Approximately 30 minutes later, officers with the Valley Township Police Department, located just west of Coatesville, responded to reports of a vehicle collision and gunshots in the 300 block of East Glencrest Road. Upon arriving at the scene, officers discovered two injured women, one of whom was approximately five months pregnant, and a 22-month-old child. Both of the women appeared to have suffered multiple gunshot wounds. The child was uninjured and sitting in the backseat of a stopped vehicle.

At approximately 10:45 p.m. on the same evening, officers with the Westchester Police Department reportedly responded to a 911 call about a carjacking that took place on Route 162 and Telegraph Road in East Bradford Township. Per the District Attorney’s Office, the victim of the carjacking told investigators that Kallie forced him out of his car at gunpoint before driving off in his vehicle.

Law enforcement authorities said they located and stopped the stolen vehicle at approximately 11:04 p.m. in nearby Caln Township following a pursuit.

After being stopped, Kallie allegedly exited the vehicle holding a gun to himself. Police were able to successfully negotiate Kallie’s peaceful surrender and he was taken into custody at approximately 11:41 p.m., according to the DA’s office.

Police searched the stolen vehicle and recovered the firearm the Kallie had previously held to himself, the press release added. The gun allegedly contained one live round in the chamber as well as a live round in the magazine.

“These senseless and tragic murders of two women and an unborn child should outrage everyone,” Ryan said. “Domestic violence continues to plague our communities and our homes and its ripple effect has life-altering consequences for too many people. We will do everything in our power to hold Mamadou Kallie accountable for these premeditated, intentional and cold-blooded murders.”

According to a report from Philadelphia Fox affiliate WTXF-TV, family members identified one of the victims as 20-year-old Tiara Rodriguez, and confirmed that the 22-month-old child found in the backseat was her son.

Authorities did not reveal the nature of the relationships between Kallie and the two victims, but one of Rodriguez’s cousins told Philadelphia ABC affiliate WPVI-TV that Kallie fathered a child with one of the deceased women.

Kallie is scheduled to appear before Judge Nancy A. Gill for a preliminary hearing in Coatesville on June 9, court records reviewed by Law&Crime show.