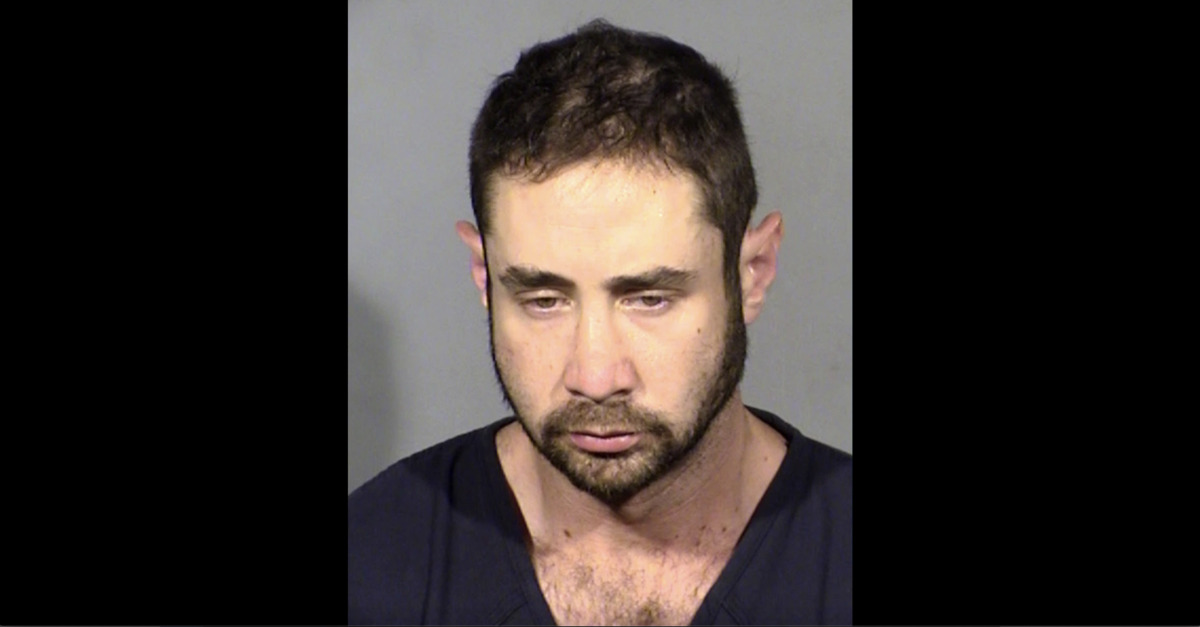 Chapman Fowler School of Law student Justin Medof, 31, has been arrested and charged with murder over the death of his girlfriend.

According to to Las Vegas-based CBS affiliate KLAS, the Clark County Fire Department received a 911 call about a “suspicious incident” at the Home2 Suites hotel on the corner of Dean Martin Drive and Tropicana Avenue on the morning of July 12.

Medof allegedly dialed and said he had awoken to find his girlfriend, 30-year-old Stephanie Duarte, “beaten, bloody and dead.”

Friends and family remember Stephanie Duarte who was killed in a Las Vegas hotel over the weekend. Her boyfriend Justin Medof was in court this morning. I’m live at 5 & 6 on @8NewsNow pic.twitter.com/9l6qZ3SgRj

Police say they arrived to find the defendant performing chest compressions on the naked woman and led him into a separate room so officers and paramedics could continue trying to save Duarte’s life.

But by then it was already too late–one of the police officers on the scene alleged that the victim’s jaw was locked and that mouth-to-mouth resuscitation was impossible. A paramedic echoed that claim.

Duarte was pronounced dead on the scene at 8:37 that morning—less than 20 minutes after the frantic 911 call was made. Authorities say she was killed as the apparent result of blunt force trauma to the head.

The Clark County Coroner’s Office has yet to weigh in with the official cause of death but identified the victim by name last Thursday. Police say Duarte was dead “for a few hours prior” to the boyfriend’s 911 call.

“You never take a police report at face value,” defense attorney Robert Draskovich told KLAS. “We are now beginning our own investigation, and we expect there to be more to this story.”

According to an arrest report obtained by local Fox affiliate KVVU, Medof told police he woke up to find the hotel room “covered in blood” and claimed that he tried to wake Duarte up by giving her a bath.

Additional details in that report cited by KLAS suggest the defendant was covered in a variety of abrasion, scrapes and bruises–which would appear to be consistent with defensive wounds. Police claim to have observed “red marks” on Medof’s rib cage, back, shoulders and knees, according to that report. Lacerations were found on the defendant’s left bicep, left elbow, both knees and the top of his right foot.

Police say that Medof admitted the couple had been fighting earlier that night while out late at the Fremont Street Experience, a pedestrian mall and tourist attraction in downtown Sin City.

The defendant allegedly told authorities that he arrived home before she did. Security camera footage and eyewitness testimony supports that aspect of the story. According to time-stamped videos now in the possession of police, Medof arrived back at the hotel at 2:12 a.m. while Duarte arrived a brief while later at 2:25 a.m. The hotel’s night auditor also allegedly told police that Duarte checked in with him when she arrived to ask if anyone left any messages or if Medof had asked about her. He answered in the negative to both questions and also told police that he never interacted with the defendant at all.

Homicide detectives believe the door to room 421 was last opened at 2:32 a.m. before Duarte was killed sometime later that morning. Guests in a close by room told investigators they heard loud noises that sounded like a man and a woman arguing and things being moved.

Medof refused to answer questions without his attorney present after being taken into custody. He was later booked in the Clark County Detention Center where he is currently being held without bail. His next court date is slated for Aug. 2.

“A person who loved life; a person who was always ready for adventure, loving, thoughtful,” Andrea Duarte, the victim’s sister, told KLAS in remembrance and shock at the tragedy that has taken hold of their family. “Very driven. Her work has always been a priority, as is her friends, but more importantly, her family.”

A GoFundMe started on behalf of Andrea Duarte for Stephanie’s memorial has raised more than $47,000 as of Monday afternoon. A message on the GoFundMe said the following:

On behalf of the Duarte family and with their permission, I am setting up a GoFundMe to help support the family with unexpected costs associated with this tragedy. I am one of Stephanie’s close friends from High School that has been close to the family and the incidents that have transpired this week.

On July 12th, Stephanie Duarte passed away. Stephanie’s passing was tragic and unexpected, leaving us all shocked that a beautiful, young angel would have her life cut short. Stephanie was a bright spark in the world and will be deeply missed. Those of you who knew Stephanie knew how contagious her energy and ambition was. Stephanie has left lasting impressions on many of us with the pure joy and love she carried with her and she will forever be remembered in our hearts and souls.

In the spirit of helping the family in any way we can, I am setting up this GoFundMe. If you would like to lend support, please feel free to contribute to this page and all the money will go to the family to help pay for unexpected costs for Stephanie.

Steph attended UCSD with the hopes of pursuing nursing. Any alumni are encouraged to support.

Please share your memories and feelings for Stephanie below as it will help the family cope.