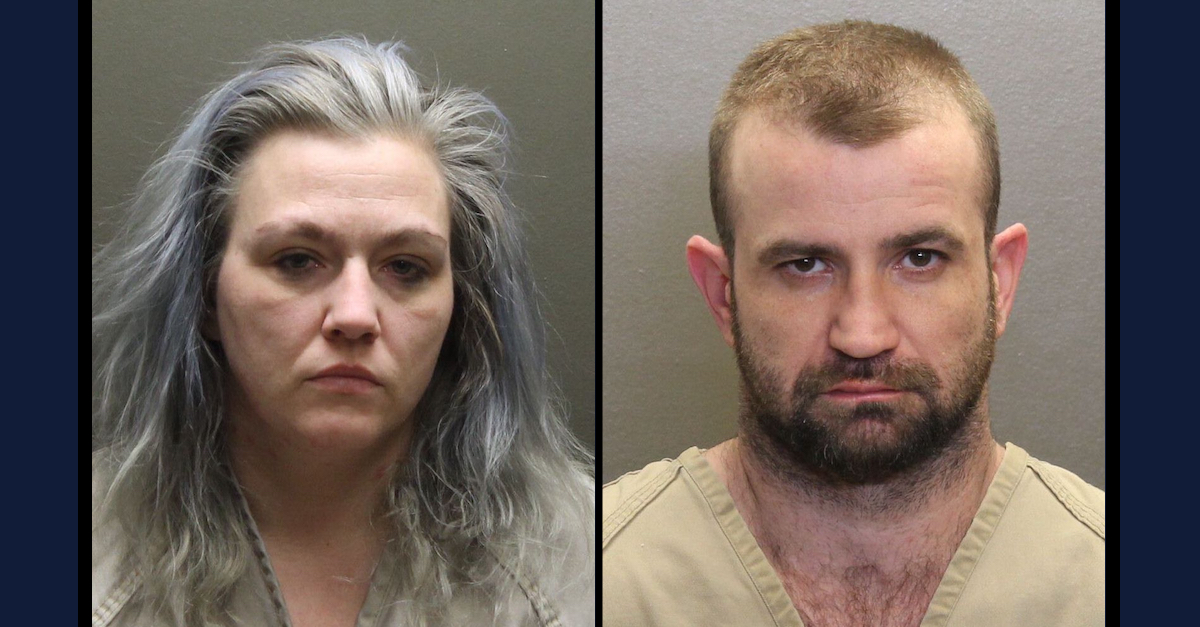 Jessica A. Wilson and Stephen A. Wilson appear in mugshots released by the Franklin County, Ohio Sheriff’s Office.

An Ohio husband and wife have been sentenced to decades behind bars after signing plea agreements with federal prosecutors on crimes related to “the sexual abuse of minor children,” the U.S. Attorney’s Office for the Southern District of Ohio announced Tuesday.

According to federal court records, Stephen Wilson pleaded guilty to counts one through three of a superseding indictment. Those admitted counts included two counts of sexual exploitation of a minor and one count of attempted sexual exploitation of a minor. Jessica Wilson pleaded guilty to one count of distribution and receipt of child pornography.

The original superseding indictment listed nine counts in total. Prosecutors dropped the remaining charges in return for the plea.

“According to court documents, from 2016 until 2021, Stephen Wilson sexually abused at least three minors between the ages of 7 and 16,” prosecutors wrote in a press release. “Stephen had video cameras inside his home, including his bedroom, and used those cameras to document and create videos and still images of the abuse. He also filmed and photographed the sexual assault of the minor children with his cell phone.”

“In one incident, Stephen drugged a minor victim with alcohol and ecstasy and raped the victim while she was semi-conscious-to-unconscious,” the feds continued. “He created a 22-minute video depicting that sexual assault. In another incident, Stephen used a handheld camera to film his penis near the face of a seven-year-old child while he showed the minor adult pornography of himself and Jessica Wilson.”

Federal authorities said Stephen “created hundreds of still images from the videos of him sexually assaulting minors” and “possessed hundreds of child pornography images depicting the abuse of children as young as toddler age.”

“Additionally,” they wrote, “Stephen possessed at least 25 images in which he had photoshopped his genitalia onto images of minor children, including prepubescent and toddler aged females, to give the effect of those children engaging in sexual activity with him.”

The authorities then explained what led to Jessica Wilson’s charges:

Jessica was present for or aware of the sexual assaults that were perpetrated by Stephen. She and Stephen continued to engage in conversations about the sexual assaults of the minor children, exchanging still images of the videos that Stephen had created and fantasizing about them together.

On several occasions, Jessica exchanged numerous files of child pornography with Stephen, discussing those files at length in text conversations and even seeking advice from Stephen on where she could access child pornography online. Thousands of text messages were recovered between the two of them, during which, the Wilsons exchanged pornographic images of victims as young as one to eight months old.

According to an FBI affidavit, the case unfolded when a high school counselor contacted the Bexley Police Department “who had been informed” one of the victims — identified only as Minor Victim 1 — had been sexually assaulted by Stephen Wilson. The victim identified in that January 2020 report denied the accusations when asked by the police what happened.

The story changed seven months later. On July 16, 2020, the same police department received a report that the same victim claimed “she had been drugged and raped” by Wilson and that two other minor females were also being victimized.

According to the affidavit, during a meeting with Victim 1 on that July day, Victim 1 reported that Stephen Wilson asked her “to watch the sexually themed movie 50 Shades of Grey in his bedroom.” During that viewing, Wilson is said in the document to have given Victim 1 “alcohol and a pill.” The victim said she could only remember that Wilson removed her pants and underwear and began to touch her vagina before she lost consciousness. Wilson, according to the document, later informed Victim 1 that the pill contained the drug ecstasy.

The victim provided the local police force with a recording of a discussion with Jessica Wilson. In it, Jessica Wilson apologized for Stephen’s actions “but did not go into any further details,” according to the affidavit.

Victim 1 said the Wilson home and bedroom was rigged with cameras “that record and save everything.” She then provided the names of two other victims — now adults — who “could also confirm the information about all the cameras.”

A second victim, Victim 2, said Stephen Wilson took her to “one of his construction jobs in the city and exposed his penis to her.”

The accusations outlined in the document were myriad. Two of the victims allegedly told the authorities that text messages between the two eventual defendants would reveal information about sex acts with young girls.

The local authorities convinced Stephen Wilson to speak to them at the local police station. During that interview, other officers executed a search warrant at his home — which his cell-phone-linked cameras soon revealed to him was ongoing.

“Wilson denied anything sexual occurring with Minor Victim 1 or Victims 2 and 3,” the affidavit says of that interview.

A forensic analysis of the lead defendant’s phone, however, turned up “approximately 600-700 images and videos that depicted minors, including toddlers, being subjected to various forms of sexual abuse,” according to the affidavit. Officers eventually found video of Stephen Wilson sexually abusing Minor Victim 1, the document asserts.

The affidavit indicates that Stephen Wilson was arrested initially on rape and associated charges at the state level in January 2021. After Wilson’s arrest, Victim 1 indicated that Wilson had sent her pictures of her own genitalia.

A sentencing memorandum submitted by Jessica Wilson says she approached the court “with remorse and acceptance” to “humbly” seek “a sentence at the low end of the guideline range” for the crime to which she pleaded guilty.

Jessica Wilson noted that the offense to which she pleaded guilty involved only one of the three victims.

“Jessica has never had a normal life,” her attorney told the judge while noting that she (the defendant) had been sexually abused for five years in her own youth.  “With that poor foundation, Jessica acted out, began abusing drugs and alcohol, and suffered from significant mental health issues, including suicidal ideation and an attempted suicide.”

Jessica Wilson married Stephen Wilson when she was 17 and pregnant with his child, the document asserts.

Over the next 20 years (2001 to 2021), Jessica had six children with Stephen. (PSR ¶ 88.) She worked to support the family (primarily at fast food restaurants), while Stephen worked intermittently but mostly stayed home watching television.

Again, not to deflect or marginalize her conduct, Jessica rarely stood on equal footing with Stephen. He was controlling, abusive, and manipulative in his relationship with her. She was the beta and when her drug abuse heightened over the last several years, she found Stephen’s domination insurmountable. It is urged that the Court ascribe some weight and significance to the relationship disparity, when considering Jessica’s history and character, as well as, the nature and circumstances of her culpability.

“[E]very case,” Jessica Wilson’s attorney waxed, is “a unique study in the human failings that sometimes mitigate, sometimes magnify, the crime and the punishment to ensue.”

The actual plea agreements remain sealed, but the affidavit, the superseding indictment, and Jessica Wilson’s sentencing memorandum are all embedded below: