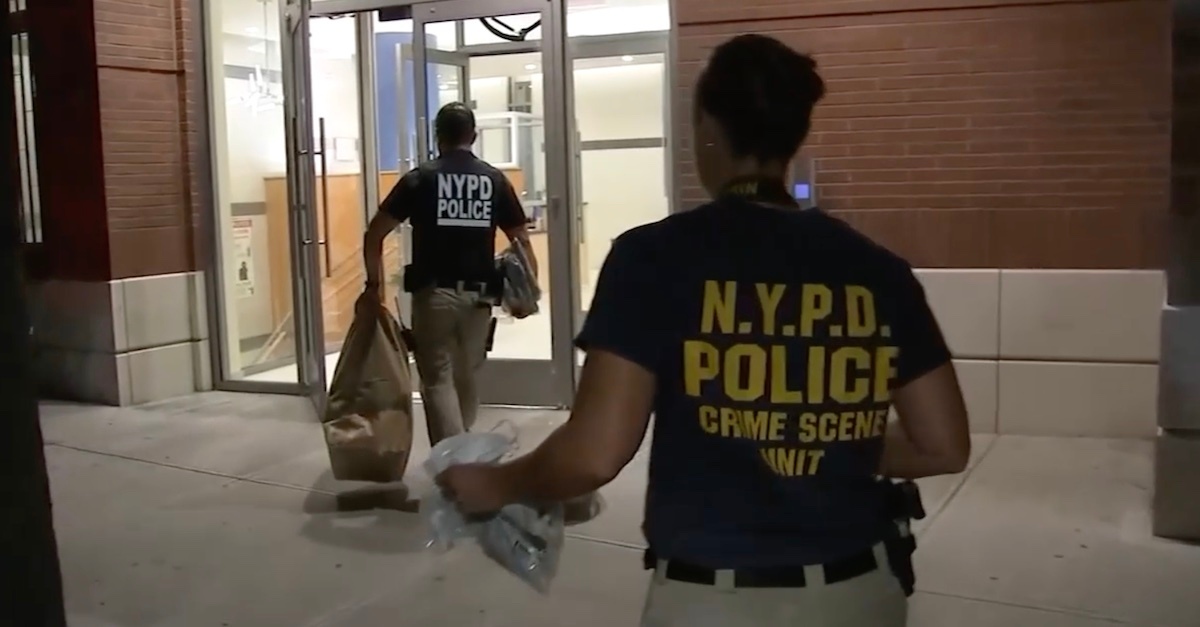 After finding a woman’s remains in two suitcases, New York City police are reportedly searching for her boyfriend. Neighbors shared horrifying details with multiple news outlets, with one saying that the missing Brooklyn man subjected the victim to extensive physical abuse.

“He broke her ribs, her legs, a couple months ago,” friend and neighbor Stephanie Harris told The New York Daily News. “She came back, she was on crutches, and he broke her apartment down, broke the TVs in her apartment. And I cried to her, like ‘Listen, I don’t want to see you on the news.'”

The victim was found dead Wednesday in her apartment in the Cypress Hills neighborhood of Brooklyn.

“On Wednesday, September 21, 2022 at approximately 1338 hours, police responded  to 315 Linwood Street within the confines of the 75 precinct for a wellness check of a 22-year-old female,” police told Law&Crime in an email. “A preliminary investigation discovered two suitcases containing human remains.  The Office of the Medical Examiner will determine the cause of death and the investigation is ongoing.”

Neighbors complained about a foul smell, and they told security the woman had not been seen in several days, according to WABC.

A guard checked her apartment on the 6th floor and tried to enter, but the woman’s boyfriend stopped him from entering, police said. The boyfriend had allegedly lived sometimes in the apartment, but cops said the woman had a temporary protective order out on him lasting to the end of September. Neighbors reportedly said they heard fighting two weeks ago.

After being stopped, the guard went downstairs to call police, officers reportedly said. Meanwhile, the boyfriend and another man snuck out with what may have been a bag containing evidence, cops said, according to WABC.

The guard went upstairs and found two suitcases with the woman’s remains in the bathroom. Investigators found a meat cleaver in the bloodied apartment.

Cops are reportedly looking for the boyfriend, saying he showed up unannounced at the apartment.

Officers did not immediately name the woman. Neither did cops reportedly name the boyfriend, except to say he was 23.

“This neighborhood is not the best neighborhood, to be honest with you, but this is outrageous,” neighbor Lindsey Vena told WABC. “Absolutely outrageous. It makes me scared to even be around here. I’m just sick.”

Harris told the Daily News she last saw the woman alive on Saturday. She said the missing boyfriend subjected the woman, standing at barely five feet tall, to constant abuse, including beating her in the hallway.

“He always said, ‘The only way you get out is when your mother’s gonna bury you, b—h,'” she said.

Harris said the woman planned on escaping the building and the boyfriend.

“She seemed down,” Harris said of seeing her Saturday. “You know, like the world is on your shoulders? She had her head down.”

She reportedly said she heard banging on the woman’s door at around 2 a.m. on Sunday, then a loud series of booms from inside the apartment.

Another neighbor told the Daily News he remembered seeing a trail of blood from the woman’s apartment to the elevator.

“There were a lot of issues, a lot of noise and banging,” the man said of the couple. “Lots and lots of blood … It was usually at nighttime. You hear very loud screaming. Six times (the cops) came here.”