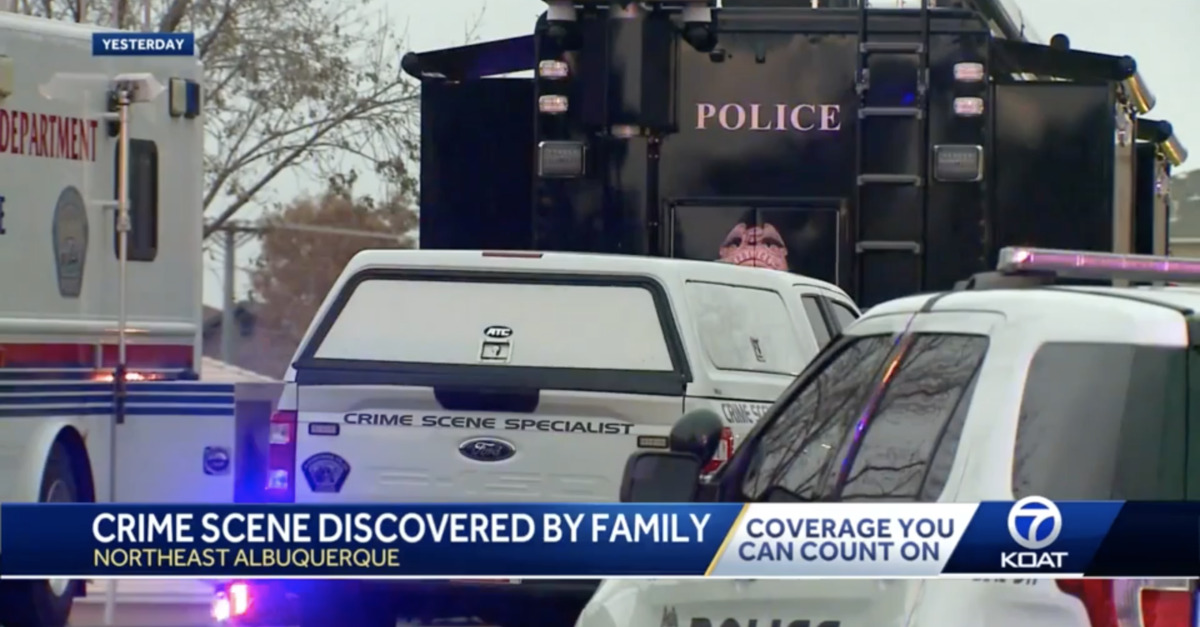 A New Mexico man has been arrested in connection with a gruesome scene that greeted his family on Thanksgiving Day.

Karlan Denio, 62, stands accused of one count of open murder in the first degree for allegedly killing, dismembering, and disemboweling his wife Connie Denio in the hours just before guests were scheduled to sit down and eat on the national day of thanks.

According to Albuquerque ABC affiliate KOAT, Darin Denio was the first to arrive at the home for the traditional dinner with his brother and sister-in-law. He had just gotten into Albuquerque from out of town but received no answer when he called to try and get in.

So, Darin Denio called his sister, Tami Pacheco, to tell her about the strange situation. Pacheco immediately called the Albuquerque Police Department, according to a criminal complaint obtained by the TV station. And, from there, things quickly became increasingly worse.

Dispatchers told the two that they couldn’t force their way into the residence, according to the Albuquerque Journal. So, Darin Denio drove over to pick up his sister; when he and Pacheco returned to their brother’s house, they got inside through the garage, KOAT notes. But, first, they had to break a hinge on a door, according to the paper.

The police would have to come this time.

Karlan Denio was lying in bed; his dead wife’s body on the floor nearby.

“Karlan looked at [Pacheco], at which point (she) backed out of the residence and called police again,” according to the criminal complaint filed against the victim’s husband obtained by the Journal.

Arriving officers wrote that the victim was found “dismembered and disemboweled” in the bedroom. The suspect was detained at the scene. He had cuts on his legs and neck, police said, and is currently recovering from those injuries at a hospital in the area.

“This is how I will always remember my aunt Connie Denio,” a relative of the deceased woman wrote in a Facebook post. “Young. Vibrant. Fearless. Not afraid to climb a tree in a dress.”

The accompanying photo shows Connie Denio, facing the camera and smiling, wearing a blue dress, leaning against the lower branch of a tree she had climbed along with two children, one in a higher branch, above, the other hugging the branch immediately next to her.

Relatives reportedly told police that the defendant was diagnosed with frontotemporal dementia (FTD) two years ago.

One psychological study from 2010 notes that people with FTD “are particularly prone to sociopathic behavior while retaining knowledge of their acts and of moral and conventional rules.”

An FTD diagnosis – and the concomitant potential for violence – have been likened, by experts, to that associated with the progressive brain disorder known as chronic traumatic encephalopathy (CTE), which frequently impacts NFL players who suffer multiple concussions.

Court records reviewed by Law&Crime show that Karlan Denio’s case has been filed with the Albuquerque Metropolitan court system; however, no appearances have been scheduled as of this writing.

The Journal notes a general timeline of the violence and the victim’s apparent last moments alive:

Police said relatives told them that Connie Denio had arranged for everyone to gather at her home around 1 p.m. Family members said they last heard from her around 5:30 p.m. in a group chat “discussing plans for Thanksgiving.”