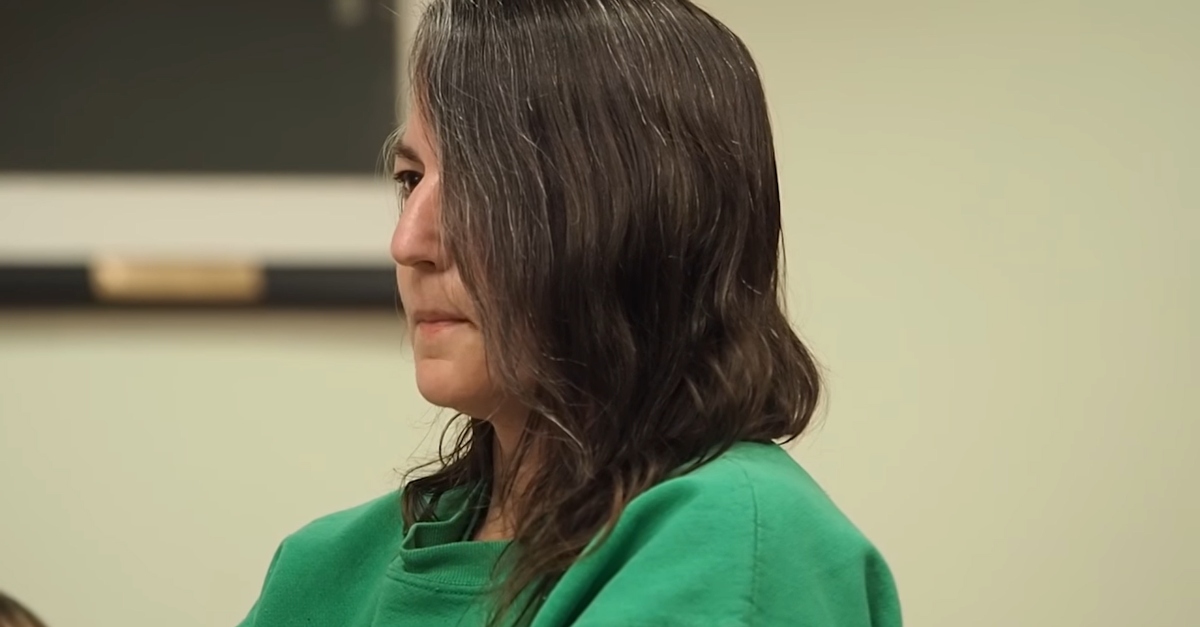 Michelle Lodzinski at her sentencing hearing in Jan. 5, 2017.

New Jersey’s highest court overturned the 2016 conviction of a woman found guilty of killing her long-dead son. The justices ruled 4-3, with the majority determining there was insufficient evidence under the law to show that Michelle Lodzinski, 54, really did murder Timothy Wiltsey, 5, in 1991.

In his opinion, Justice Barry T. Albin dismissed the proffered motive, saying the state relied on stereotypes about single-parent mothers to bolster a conviction. Also, he asserted that the prosecutors could not even give jurors a guide under the law on how to choose between reckless manslaughter or purposeful or knowing murder. There was not enough to convict her of murder based on the available evidence, including shifting accounts she made to police, according to the ruling.

“It is not uncommon for a twenty-three-year-old single mother, raising a child on her own, to have financial and social challenges,” he wrote. “That singularly unremarkable scenario hardly indicates a motive to murder one’s child. This Court has rejected the very type of generalized class assumptions offered to the jury as a motive to commit a crime.”

As far as Albin was concerned, the big gap in the state’s case was that prosecutors could not show whether Wiltsey’s homicide death constituted murder in the first place. Though he acknowledged that the prosecution could have theoretically proven their case with the circumstantial evidence at hand, the actual results were wanting.

“Dr. Natarajan concluded only that the manner of death was homicide. She did not and could not venture a medical or scientific opinion that a person purposely or knowingly caused Timothy’s death. Although Dr. Natarajan was not permitted to opine on the ultimate question of Lodzinski’s guilt, the dearth of evidence precluded her from reaching a conclusion on cause of death, other than unknown,” he wrote. “Dr. Natarajan’s testimony did not provide the missing piece to the State’s case — evidence that Lodzinski, if she caused the death of her son, possessed the requisite mental state for a conviction of murder.”

Lodzinski was sentenced in 2017 to 30 years in prison.

The majority gave some benefit of the doubt to the 2016 jury and prosecution, accepting testimony that the blanket found with Wiltsey’s incomplete remains was actually from the mother’s apartment. Albin nonetheless noted that this allegation popped up years later after a Middlesex County Prosecutor’s Office investigator reopened the case, believing it would be “very powerful evidence” to link the blanket or a pillowcase found with the remains to Lodzinski.

COLD CASE Michelle Lodzinski is charged with the murder of her 5yo son Timothy Wiltsey in 1991 http://t.co/Ggp0Cv08r6 pic.twitter.com/LvA7xiDMSy

According to the account from the ruling, witnesses, including Lodzinski’s niece, found her alone on May 25, 1991 at a carnival in Sayreville. The mother told officers that she turned her back on her son when she was getting a drink from a concession stand, and that he was gone when she turned back around. Prosecutors declined to press charges against her in 1992, amid authorities finding some of the boy’s skeletonized remains in a shallow creek bed in Edison, New Jersey.

Lodzinski was on law enforcement radar as a suspect at least in part because of her shifting stories to authorities. For example, she allegedly did not initially tell investigators that she used to work near where her son was found, even after a man previously found the boy’s left sneaker.

“Over the course of multiple interrogations, she gave shifting accounts about Timothy’s disappearance that cast doubt on her credibility,” Albin wrote.

Nonetheless, the justice highlighted accounts that Lodzinski was a devoted mother to Wiltsey.

To be sure, the ruling was as close as could be, with dissenting justices Anne M. Patterson, Faustino J. Fernandez-Vina, and Lee Solomon asserting that the majority ruling undermined the deference courts should pay to jurors.

“The majority all but ignores the discovery of Timothy Wiltsey’s remains in a remote area less than a half-mile from defendant’s former workplace,” the dissent said. “Instead, it emphasizes the categories of evidence that the State did not present — a confession by defendant, testimony from a witness who actually saw defendant injure or kill her son, and forensic evidence such as DNA or hair in defendant’s home or car —implicitly contending that a defendant may not be convicted of a crime without such evidence.”

The dissent further argued that the majority got things wrong by dismissing the state’s proffered motive.