Nevada Woman Allegedly Tried to Murder Newborn After Home Birth, Believed Victim Was a ‘Devil Baby’ and ‘Grunting at Her’ 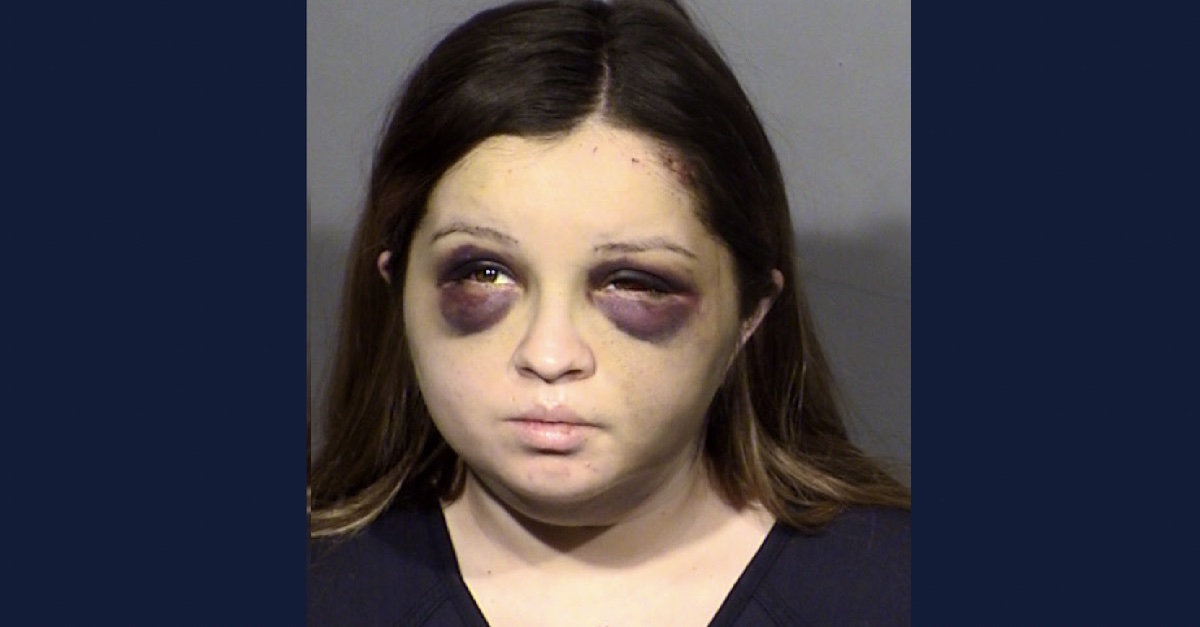 A 23-year-old Primm, Nevada woman faces attempted murder and child abuse charges after she gave birth in a toilet at a home in Las Vegas and allegedly tried to kill the newborn on the way to the hospital.

Documents obtained by Law&Crime show that Ashley Hollingsworth is accused of trying to kill the baby by smothering the newborn with a blanket as the victim’s father drove to the hospital. The shocking incident began on Saturday night, March 26, when Hollingsworth gave birth in a toilet in a guest bathroom in a Las Vegas home belonging to relatives of her boyfriend. The boyfriend said that they were staying in Las Vegas so that they could be closer to the hospital, according to the Las Vegas Metro Police Department (LVMPD).

The midnight car ride to MountainView Hospital and everything else that allegedly followed can only be described as hellish.

While in the vehicle, Hollingsworth allegedly tried to kill the child by wrapping a “blanket around the baby’s head and […] pushing the blanket against the baby’s face.” The arrest report said the defendant later admitted she “pinched the blanket over the baby’s nose or face” two or three times for five or 10 seconds at a time.

When they arrived at the hospital early Sunday, Hollingsworth was “bleeding profusely” but she allegedly refused to enter the facility and took off. Authorities said it took two hours to find her.

When they did, she was clearly injured (see above).

“Ashley was wearing grey sweatpants, with a large blood stain in the crotch, a bra and her sweater pulled over her face. Ashley refused to take the sweater off her face out of fear,” the arrest report said.

When an officer removed the sweater, law enforcement noticed Hollingsworth had a “Contusion with considerable swelling to left side of her head.” A doctor believed that Hollingsworth’s injuries were self-inflicted, the documents said.

“While in UMC [Trauma], Ashley stated the she had gotten beat up by a rock,” the arrest report continued. “Ashley continuously talked about prophecies and other religious ideations to nursing staff while she was at UMC.”

The LVMPD said that further investigation revealed that Hollingsworth had made “strange” statements about the baby being evil. She also allegedly asked her boyfriend to punch her in the face. According to the arrest report, the boyfriend said that Hollingsworth punched herself in the face twice with a “closed right fist” before she stated that she was ready to go to heaven.

“A short time after punching herself, Ashley laid down next to [the boyfriend] and thanked him for not punching her in the face,” the arrest report continued.

A few hours later, Hollingsworth gave birth in the toilet.

The boyfriend “entered the bathroom and observed Ashley standing, facing away from the toilet,” the report said. He “described Ashley as having a confused look on her face” and “walked to the toilet and observed the baby, laying on her back, in the toilet.”

The man “picked up the baby and stated that the child’s head was not submerged in the water,” documents said.

Then came to the car ride to the hospital. The boyfriend told police that Hollingsworth referred to the newborn as a “devil baby” and that she said she needed to kill it, cops said. The man told cops he “wrestled the baby from her and held the baby on his lap” until they got to the hospital.

Doctors on March 27 at first feared the baby “may have suffered a brain bleed, and an anoxic brain injury,” but by Tuesday, March 29 “medical staff treating the baby determined it was not likely she had suffered any injuries,” the report said.

Authorities said they interviewed Hollingsworth on Tuesday morning. She disclosed that the she is the mother of two other children who live with their father in California, where the defendant was born. The defendant also said she was diagnosed at the age of 19 with a medical condition for which she was prescribed medication.

Hollingsworth said had stopped taking her medication during her pregnancy, the arrest report said.

Cops said that Hollingsworth believed a “spiritual battle” was “going on inside of her,” and that the baby was “probably evil” and “grunting at her.”

“Ashley said that Jesus had worked ‘good magic’ on the baby and now she is ‘okay,'” documents said.

“After seeing the baby’s eyes, smelling what she described as an abnormal scent, and the baby grunting at her, Ashley decided to wrap the blanket around the baby’s head,” the arrest report said.

The defendant also said that she ran away from the hospital and tried to take her own life by smashing a rock against her head fifteen times or more.

“As she was hitting herself, she remembered thinking, ‘Why am I not dying?'” the documents said. Hollingsworth said she felt suicidal because she thought she hurt the newborn.

Clark County Detention Center records reviewed by Law&Crime show that Hollingsworth remains held without bond on charges of attempted murder and first-degree child abuse or neglect. An arraignment has been set for 8:30 a.m. Las Vegas time on Monday, April 4.