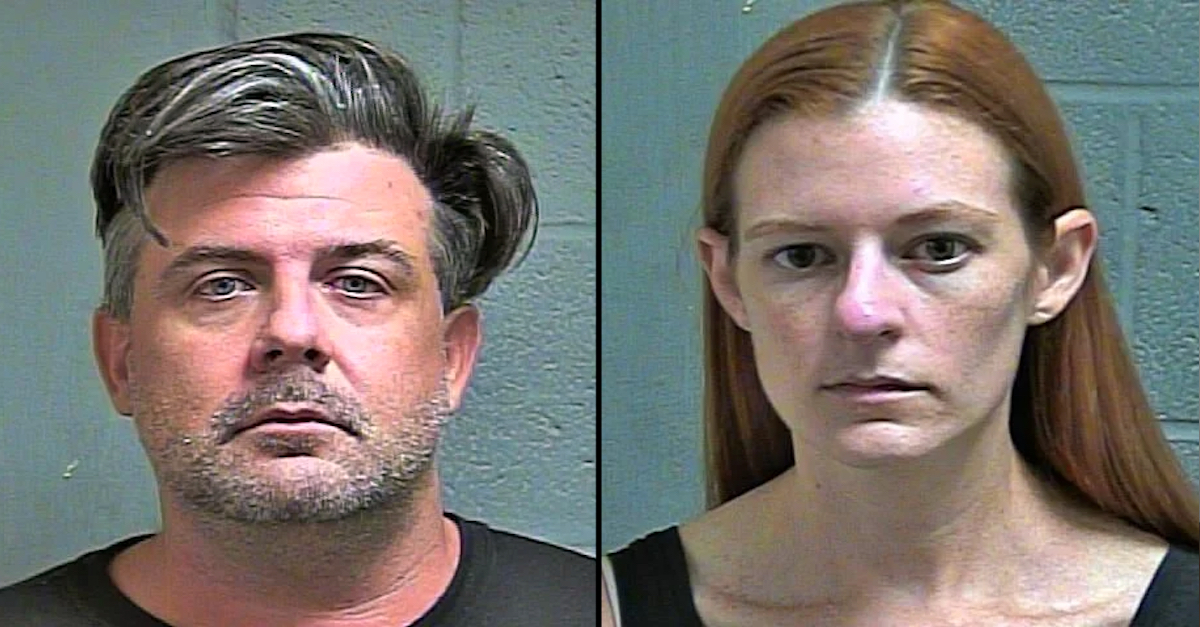 Oklahoma prosecutors want to execute a former criminal defense attorney who allegedly fell in love with one of her clients, married him, and helped him commit a triple murder.

According to court paperwork on file in Okmulgee County, former attorney Keegan Kelley Harroz, 38, stands accused of three counts of deliberate and intentional first-degree murder and one count of first-degree burglary.  According to other court records, Barry Roland Titus II, 40, her alleged former client and lover, faces the same four counts.

Each is accused of murdering Titus’s ex-girlfriend Tiffany Eichor and her parents Jack Chandler and Evelynn Chandler on or around Sept. 7, 2019.

An information filed in April 2021 accuses the couple of “acting in concert with the other” in the killings, which — per the first-degree murder charges alleged — were said to have been committed “willfully, knowingly . . . unlawfully and with malice aforethought.”  The document also says the defendant duo broke into a house containing all three victims “by forcibly kicking open the front door of said dwelling house and entering without the consent of the occupant with the intent to commit the crimes of Murder in the First Degree.”

Two bills of particulars with regards to the punishments sought by the state say “the defendant should be punished by Death due to and as a result of” a series of aggravating factors.  The document was filed by District Attorney Carol Iski of Okmulgee County.  Similar documents are on file as to each of the two defendants, though they differ slightly.

Among the five factors listed in support of the death penalty as to Harroz are that (1) the defendant allegedly “created a great risk of death to more than one person”; (2) that the killing of Eichor was “especially heinous” and involved “serious physical abuse, torture, and pain”; (3) that the killing of Evelynn Chandler was “especially heinous” in that it involved Evelynn hiding in her closet while the other two victims were shot and killed; (4) that the killings of the Chandlers were attempts to avoid prosecution for the murder of Eichor; and (5) that the defendant has a previous history of violence and would likely commit future crimes.

A similar document as to Titus alleges that the killing of Eichor was an attempt by Titus to avoid prosecution for domestic abuse, assault and battery, strangulation, and kidnapping.

According to reports by Oklahoma City NBC affiliate KFOR, Harroz represented Titus against accusations by Eichor that alleged he had threatened the latter’s family. 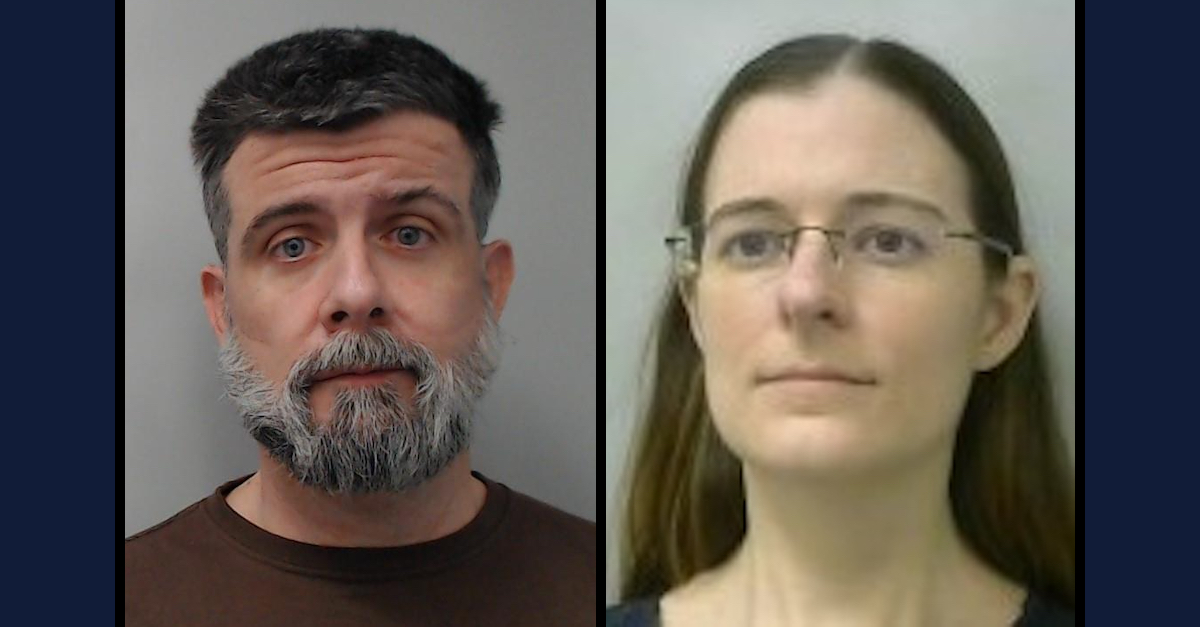 A press release written by the local DA’s office on April 8, 2021, and posted online by the Tulsa World alleges that a family member found the bodies of the three victims one day earlier.  It was immediately made clear to law enforcement that Titus was giving the family trouble, the press release indicates.

Investigation revealed that there were reports of Titus assaulting Tiffany on at least two previous occasions and that felony charges were pending against him in relation to one of those assaults. Further, court records revealed that Tiffany had an active protective order against Titus. The attorney representing Titus in his felony case and his protective order case was Oklahoma City attorney, Keegan Kelley Harroz, who officers later learned was also the wife of Barry Titus. Officers learned that Harroz had a 2010 silver or light colored Lexus sedan registered in her name.

When processing the crime scene, officers discovered all three victims had been shot multiple times with at least two different caliber weapons. It appeared the perpetrators gained entry by kicking in the front door. Multiple shell casings were found at the scene, which were 5.56 caliber and 9 mm.

Surveillance cameras at the home captured some of the events which led up to the killings, the press release indicates:

The video revealed the perpetrators arrived in a light colored vehicle and parked in the roadway to the southeast of the residence. Two individuals exited the vehicle; one was obviously male and very tall and the second individual much shorter and smaller than the first. The perpetrators approached on foot and then the video stops. It was also determined the perpetrators pulled the electric meter prior to forcing entry into the residence. Investigators later examined the clock on the stove inside the residence and once power was restored, they discovered that the power was disconnected at 3:04 a.m. Based on that information, investigators believe the murders occurred in close proximity to that time. The vehicle seen in the video is consistent with the car owned by Keegan Kelley Harroz.

The press release says sharp-eyed investigators found a baseball hat near where the assailants parked their car.  DNA swabs taken from that hat immediately pointed to Titus, the document indicates.  His DNA was in a federal database because he previously served time in Colorado, it says.

Also during the investigation, it was learned that in January, 2019 the Sheriff’s Office responded to this address when the homeowners found a suspicious package of a powdery substance under the porch. The substance was seized by law enforcement, and tested for controlled substances which were negative. During the investigation of the homicides, it was discovered that one Jose Uribe, a defendant in a drug trafficking case in Oklahoma County, admitted he had planted this package. He explained that in an effort to obtain a lighter sentence, he had been attempting to work with law enforcement to provide information helpful to the prosecution. He advised that his attorney, Keegan Kelley Harroz, approached him in January, 2019, and asked him to plant what he believed to be methamphetamine at this residence. She explained this was an act of revenge because one of the individuals living at that residence had testified against one of her clients. She also instructed Uribe to contact his handler with the Drug Task Force and advise them drugs were being sold out of this house. As a result of this information, charges were filed on September 13, 2019 in Okmulgee County against Ms. Harroz for Witness Intimidation. She was arrested on the same date. Those charges remain pending.

Harroz’s brother, who was in Texas, quickly contacted the authorities and said he was in possession of an AR-15 rifle that he believed was used in the killings, according to the press release.  He did not provide any additional information, the DA said.  The authorities say they ascertained that Harroz and Titus purchased the weapon.

Defense attorneys for the duo either did not respond to requests for comment by KFOR-TV or declined to comment.

Harroz no longer appears in an Oklahoma Bar Association list of attorneys. According to court records, the state supreme court issued an interim suspension against Harroz on Feb. 10, 2020, and was further suspended on June 7, 2021, for failure “to comply with mandatory legal education requirements for the year 2020.”  Another order of suspension dated June 7, 2021, says Harroz failed to pay bar association dues for 2021.

According to the U.S. Department of Justice, Harroz pleaded guilty in September 2020 to federal weapons charges and was sentenced to serve 24 months in prison starting in March 2021.

“Specifically, Harroz admitted that, on or about August 4, 2019, she possessed a firearm in violation of federal law because she was subject to a state-court victim protective order at the time she possessed the firearm,” the feds noted in a press release.

According to jail records, both defendants are locked up in the Okmulgee County Detention Center.