‘Neighbor from Hell’ Once Again Charged with Stalking

You have one guess as to what a woman known as the “neighbor from hell” allegedly did to get prosecuted again.

Lori Christensen, 58, of Minnesota was formally charged by the Ramsey County Attorney’s Office with two counts of stalking, according to KMSP.

The defendant is best known for her behavior when she lived at Homewood Place in White Bear Lake. Christensen was convicted in December 2011 with violating a harassment restraining order, and charged in 2012 with aggravated stalking and violating a restraining order in her harassment of her neighbors Kimberly and Gregory Hoffman.

The couple said Christensen taunted them with signs on her home, mocking Kimberly’s history as a recovering alcoholic, and slinging various insults.

“I saw mommy kissing a breathalyzer,” she wrote in one sign caught on video.

“Get a life you stalking loser freak,” she wrote in another, with a sign next to it stating, “The guilty talk the loudest.” 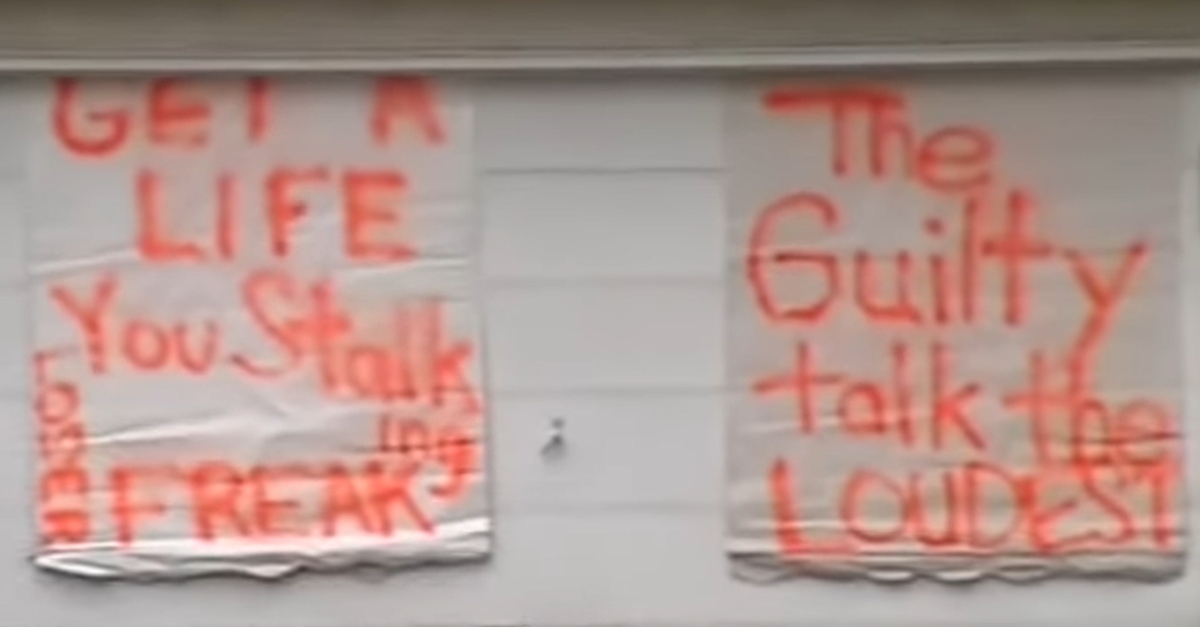 Christensen flipped off a KMSP news team that managed to interview her outside of her home in 2011, and she recorded them with a handheld camera while wearing sunglasses (at night). She called the cops on the outlet, they said.

Other harassing behavior against the Hoffmans included Christensen lifting her skirt and rubbing her crotch during a birthday party for their son, the Hoffmans told the outlet.

The defendant claimed in a 2013 ABC interview that their feud started because the couple were jealous, and Gregory wanted to have a relationship with her. Perhaps it is no surprise that he denied that. The couple said their feud began in 1999, when Kimberly brought up a quarrel between their daughters.

“You should have died,” Christensen said, according to Kimberly. “Why don’t you drink some more scotch?”

Christensen pleaded guilty in July 2013 to violating a restraining order, tried and failed to withdraw her plea, and was ultimately sentenced to five years of probation consecutive to her pending, ongoing term. She had to stay at least a mile from the couple’s home.

“I have no intentions of going back to that neighborhood,” she said, according to The Star Tribune.

This brings us to the new criminal case. Christensen allegedly began stalking her new neighbors on the 5200 block of East Street when they moved to the place in 2016. She videotaped them, put up “no trespassing” signs facing their yard, put up a mannequin looking into their yard, and cut their TV line, the neighbors said.

The harassment allegedly continued after they moved out to avoid the treatment. They and four real estate agents claim Christensen harassed the agents and scared away potential buyers. One incident allegedly involved her taping Asian clients, moving her car nearby, and placing Trump banners on the vehicle. Per KMSP:

When one realtor was leaving the property he said Christensen approached his car and yelled, “Go back to your f—-ing country and get the f—k out of my neighborhood.” She then “slapped her ass” in front of him.

She told potential buyers that the home previously had a fire and that the prior owners used meth, another realtor reportedly said.

[Screengrab of Christensen in 2011 via KMSP / Tom Lyden]