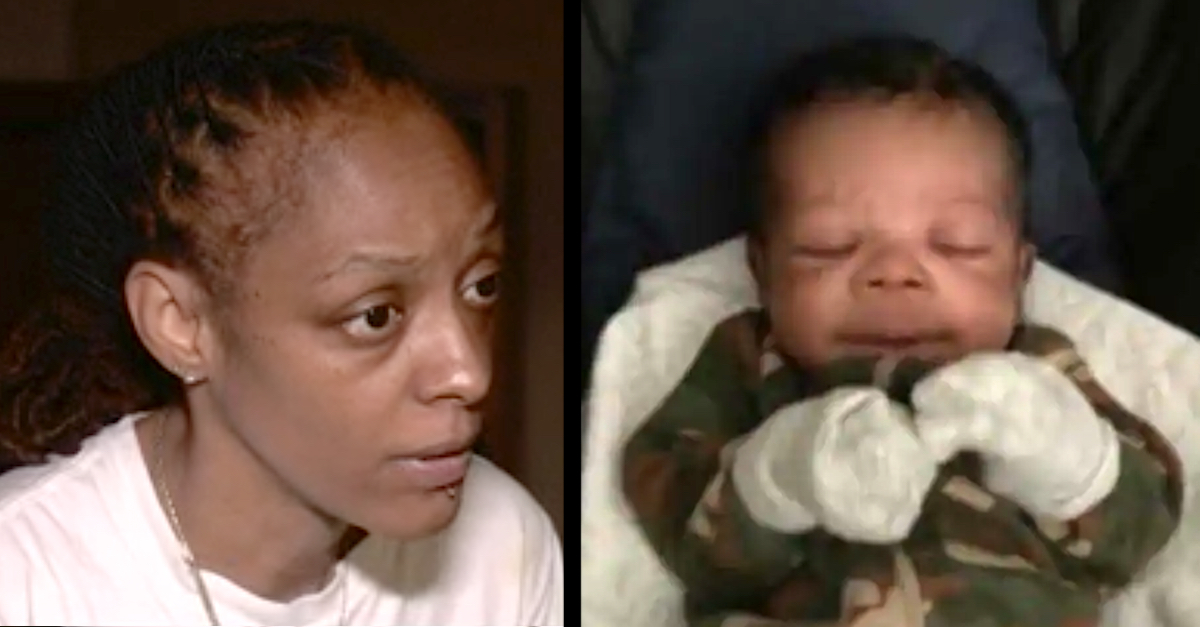 The mother of a missing two-month-old was arrested and charged with murder on Friday afternoon in the District of Columbia.

LaDonia Boggs, 38, was said to be the lone suspect in the disappearance of her infant son, Kyon Jones, earlier this week, according to ABC affiliate WRIC in Richmond.

“The mother is being questioned about the child’s whereabouts,” D.C. Mayor Muriel Bowser said during a Monday press conference. “She’s the only person of interest.”

Authorities arrested the baby boy’s mother after searching though a faraway landfill southeast of Richmond in Charles City County, Virginia, and coming up empty-handed. Boggs previously admitted to disposing of her son’s lifeless body after he somehow mysteriously died.

“I came back in the house and got a blanket and his car seat, and wrapped it up and took it outside and just throwed it in the trash,” Boggs said in video obtained by Washington, D.C. NBC affiliate WRC.

“I wrapped it up, took it outside, and disposed of it in the trash,” Boggs reiterated at another point. “And that’s what happened.”

She made similar comments in an interview with CBS affiliate WUSA.

The distraught mother reportedly repeated herself throughout the footage that was captured by D.C. “missing-persons advocate” Henderson Long.

“The last thing that I remember was that I had rolled over, and he was on my chest,” she said. “After that, when I was asleep, rolled over, noticed he was unresponsive–breathing–and I panicked.”

“He was asleep on my chest and when I woke up he wasn’t breathing anymore because he was just that small,” Boggs continued. “He was only two months old. He was a premature baby.”

The infant was last seen last Wednesday, police say, but was allegedly not reported missing until last Friday.

Critical #MissingPerson 2 month-old Kyon Jones, who was last seen in 1500 block of Benning Road, Northeast, on Wednesday, May 5, 2021. This incident was reported on Friday, May 7, 2021

At approximately 1:10 pm [on Friday, May 7], members of the Fifth District responded to the listed location for the report of a check on the welfare of an infant child. Upon arrival, officers located the mother, who was unaware of the infant’s whereabouts. The Metropolitan Police Department’s Youth and Family Services Division responded to the scene and initiated an investigation into the circumstances surrounding the missing person’s disappearance.

The boy’s father is reportedly the person who reported Jones missing.

The Charles City County Sheriff’s Office confirmed their involvement in the Waste Management landfill search via Facebook. The landfill itself also told media that they were assisting law enforcement in the two-day-long search.

In that video, Contee claims the boy’s mother can be seen throwing various unidentified items into the trash, according to local Fox affiliate WTTG.

“[P]erhaps, just perhaps this child is somewhere out there,” Contee told the outlet.

Boggs was arrested and charged based on probable cause.

“The missing person’s remains have not been located at this time, however, based upon the information gathered during the investigation a suspect was identified and charged accordingly,” the D.C. Metro Police press release also said. “Additionally, it was determined that this offense is domestic in nature.”

[image of the defendant via screengrab/WUSA; image of victim via D.C. Metro Police]