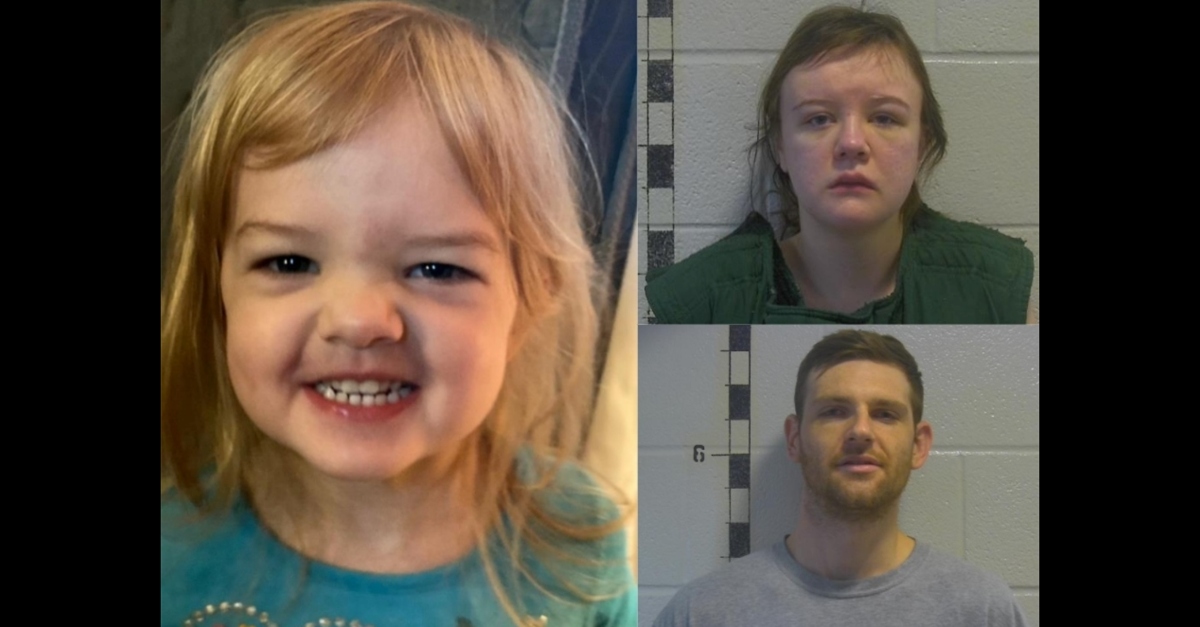 A woman and her boyfriend have been charged with murdering her daughter. Officials out of Shelby County, Kentucky, have said that Serenity Ann McKinney, 4, was last seen alive on Christmas Eve of 2020. Now her mother Catherine Abigail McKinney, 21, and her mother’s boyfriend Dakota Hugh Hill, 26, are locked up.

“Concerned family members have not seen Serenity in over a year,” deputies said in a missing person notice about the child on Feb. 3. At the time, they said her last known whereabouts were unclear. They suggested it could be in the areas Shelby, Jefferson, and Bullitt Counties.

“We last saw her Christmas of 2020 at the family Christmas,” Catherine’s stepmother Aundria Wainscott said, according to WLKY. “We spoke to her on the phone Father’s Day week in June of 2021, but that was the last contact. We want to know that she’s safe, yes, that’s our main priority at this point.”

Catherine McKinney and Dakota Hill were first arrested all the way out in Thomas County, Kansas, on Feb. 6 under an arrest warrant for custodial interference.

“Yeah, it’s pretty far from Louisville, Kentucky,” Shelby County Sheriff’s Capt. Blake Lisby said at the time, according to WDRB. “They were in a vehicle, just the two of them, as far as I know.”

Dakota Hill is charged with murder and abuse of a corpse. We do not see a list of charges for Abby yet. The sheriff told us the investigation lead officers into KSP Post 4 jurisdiction (E-Town) and that’s why they are now handling case. pic.twitter.com/VeAwA5KSo0

The search for Serenity arrived at a tragic end on Friday. She was found in a wooded area around 2 p.m. near the 1300 block of Skyview Road in West Point, near the line between Jefferson and Bullitt Counties, authorities said. An autopsy was set for the following day.

Hill and Catherine McKinney are now charged with murder, abuse of a corpse, and custodial interference.