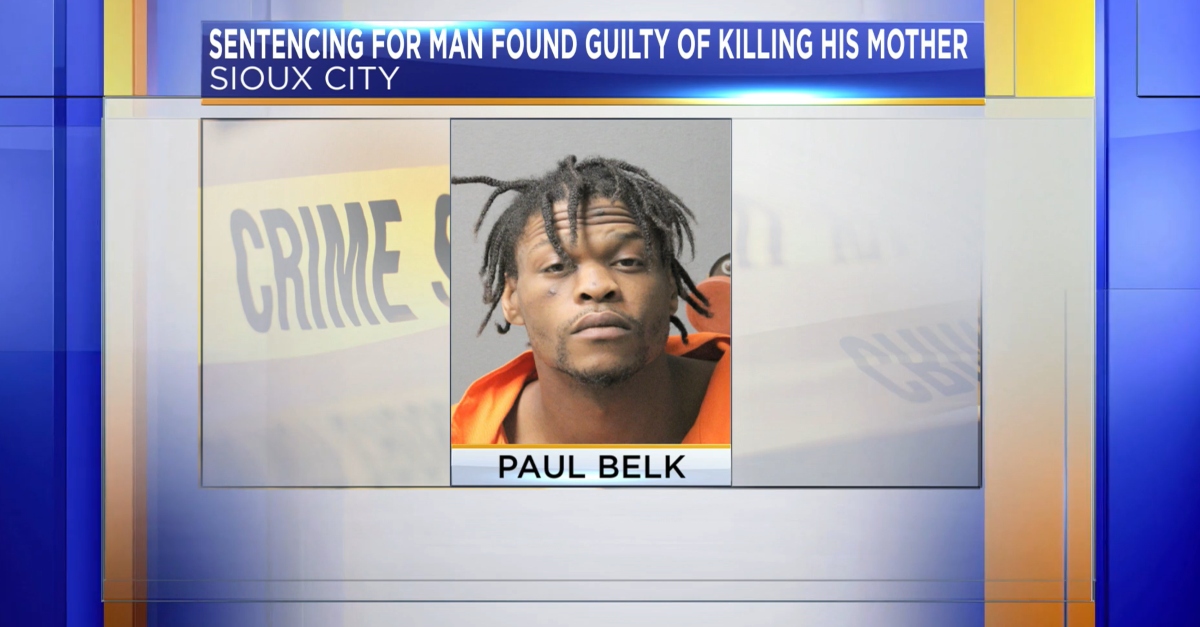 When Iowa man Paul Belk killed his mother Lisa Belk, it was as grisly as murders go, with him stabbing her 16 times using two knives and a pair of scissors. Nonetheless, his sister said that their mom would have forgiven him.

“Mom still loved you when she died,” Zoe Belk said in a Friday sentencing hearing out of Sioux City, according to The Sioux City Journal.

Ultimately, defendant Belk, 32, is set to spend 50 years in prison but has the possibility of parole after 35 years.

In a four-day bench trial last April, prosecutors said that he stabbed his mother to death at his sister Suzi Belk‘s apartment.

He stayed at her home on April 13, 2020, after he arrived in the city from South Carolina., Suzi said in testimony according to KMEG. On learning this, mom Lisa got excited and wanted to visit.

Judging by testimony, Paul Belk’s behavior became more disturbing as the day went on, even playing with a knife. Though he had denied his mother a hug when she arrived, he finally said, with the knife behind his back, “I am ready for that hug now.”

Zoe Belk, who was there, told her mother not to hug him and to sit down. Paul, however, began to tell them to put their phones, watches and other items into a basket. Then he stabbed his mother.

“I screamed and she fell,” Zoe Belk said. “I knew she was dead.”

He also stabbed Suzi twice, wounding her after she tried to intervene.

The defense tried to argue that Paul Belk was mentally ill, living with schizophrenia. A forensic psychologist for the state, however, testified that he was still able to tell right from wrong.

In his Oct.1 verdict, Judge Jeffrey Neary gave some weight to the mental health claim. Prosecutors charged defendant Belk with first-degree murder and willful injury, but the judge determined that Belk’s marijuana use interfered with his ability to commit the attacks with “specific intent” under the law.

“It appears from this record that the use of marijuana brings out the schizophrenia and paranoia with Paul Belk and consequently they manifest in tandem, but then diminish over time,” he wrote, later saying, “Very little of what he did makes sense except when viewed in the light of his manifested mental illness or psychosis which appears to come about as a result of his marijuana use on the day of his arrival and perhaps on the date of the stabbings.”

Forgiveness continued to be a fraught and painful process for the family.

“You exposed my children to the most evil they will ever see, and for that I’m having trouble forgiving you,” Suzi said in her statement. She urged him to stop his marijuana use and to recover, so something good could emerge from their mother’s death.

“Don’t make this for nothing,” she said.

Paul Belk did not speak at his sentencing.