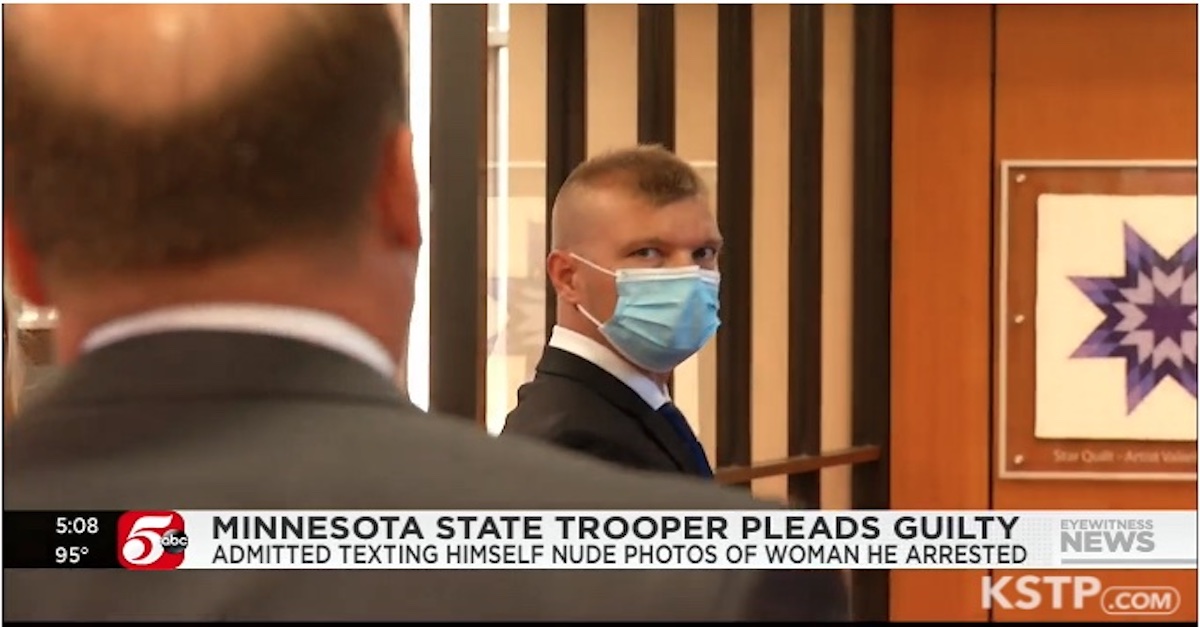 Albert Kuehne, a former Minnesota State Trooper who was caught texting himself explicit photos from the phone of a woman he had just detained, has pleaded guilty to reduced charges, more than one year after the incident occurred.

On Thursday, Kuehne pleaded to the misdemeanor charge of nonconsensual dissemination of private sexual images, and he will be sentenced to two years supervised probation, Hennepin County court documents show. The judge has also referred the case to Veterans’ Court, which may require Kuehne to meet additional obligations, such as treatment programs and/or drug testing.

The plea deal is a significantly better outcome for Kuehne than if he had been found guilty. Kuehne had originally been charged with two counts of aggravated harassment committed because of bias, due to the driver being a woman. Each felony count would have carried a sentence of up to five years in prison and/or a fine of up to $10,000.

On March 25, 2020, Kuehne was called to the site of a one-car accident and detained the driver, a 25-year-old woman, on suspicion of driving under the influence of alcohol. Squad car video showed the driver taking out her cell phone, and soon after, Kuehne could be heard saying “give me your phone,” according to the charging documents.

The driver was taken to the hospital, treated, and released. After she got home, her boyfriend, who was using her MacBook, which was synced to her phone, noticed that messages with nude photos attached were sent from her phone to an unknown number. When her boyfriend called the number, Kuehne answered and eventually identified himself.

Kuehne had texted himself three photos of the driver, in which she was either naked or partially naked; two of the photos showed her exposed breasts. Investigators matched the time the texts were sent to the time Kuehne was alone in the squad car, and Kuehne had apparently deleted the outgoing messages he sent on the driver’s phone in an attempt to cover his tracks.

Kuehne, who has also served in the Army Reserve, has not been with the Minnesota State Patrol department since late 2020, after he had been charged.

The Army Reserve said that it plans to review Kuehne’s case.

“We are aware of an incident that occurred involving Minnesota State Trooper/Army Reserve Capt. Albert Kuehne,” an Army Reserve spokesperson told Law&Crime. “The Army Reserve sets high standards for all of its Soldiers and demands adherence to the Army Values. The Soldier’s chain of command will review the findings of this incident and will take appropriate action. Due to protections under the Privacy Act 5 (U.S.C. § 552a), we are unable to provide any additional details.”

The Reserve referred all other questions to Minnesota authorities.

Editor’s note: This story has been updated to add comments from the Army Reserve.