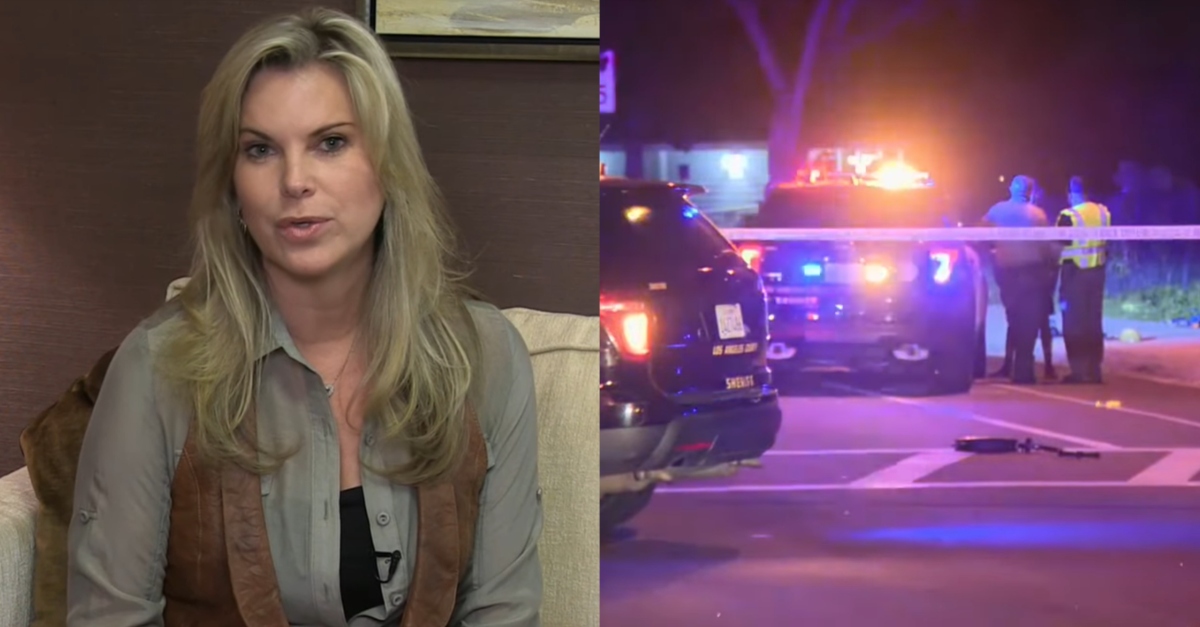 Rebecca Grossman in a 2014 video. Authorities investigating the crash in 2020.

The Los Angeles philanthropist accused of killing two young brothers as she allegedly sped through a crosswalk at nearly twice the posted speed limit has pleaded not guilty to murder charges.

Rebecca Grossman, 58, appeared in court Friday and entered a not guilty plea at her arraignment. She’s charged in the deaths of Jacob Iskander, 8, and Mark Iskander, 11, two brothers who were killed when Grossman hit them with her car on Sept. 29, 2020.

She was allegedly racing former Los Angeles Dodgers pitcher Scott Erickson at the time. The boys were crossing the street at a marked crosswalk in Westlake Village with their parents, Nancy Iskander and Karim Iskander. Mark and Jacob were reportedly on roller skates and a skateboard when they were struck.

As Law&Crime previously reported, Grossman was allegedly engaging in a “high-speed game of chicken” with Erickson when she reached speeds of almost 70 miles per hour—more than twice the legal speed limit in the area of 45 mph. Alcohol is not believed to be a factor.

Grossman allegedly kept driving after striking the children, only coming to a stop a quarter-mile away because her engine cut off, authorities said. It was initially reported that she carried one of the boys on the hood of her car for more than 100 feet and then, after hitting the brakes, ran over him as she left the scene.

At a preliminary hearing, a sheriff’s deputy testified that Mark was thrown 254 feet.

Evidence at that hearing also revealed that Grossman had reached 81 mph about a second and a half before hitting the boys.

Westlake Village is located in the San Fernando Valley, about 35 miles northwest of downtown Los Angeles.

Grossman is the wife of Peter Grossman, a plastic surgeon, and a co-founder of the nonprofit Grossman Burn Foundation, which, according to its website, aims to “promote effective, sustainable partnership solutions for the comprehensive treatment, care, and support of burn survivors and their families in the United States and around the world.”

“What occurred that night was a horrible, unspeakable tragedy, but it was not murder,” Grossman’s lawyer Tony Buzbee said in a statement Friday. “Traveling over the posted speed limit is simply not murder, no matter how the DA attempts to twist the facts for his own purposes.”

Buzbee called his client “a pillar of this community” and said that she was being “bullied” by gamesmanship on the part of prosecutors. He blamed the city of Westlake Village for not making the crosswalk safer.

She had previously tried to get the charges dismissed, and had argued in court that she did stop of her own volition. A Los Angeles judge ruled earlier this month that Grossman must stand trial for murder in the boys’ deaths. finding there was evidence that Grossman did intentionally flee the scene—including evidence that she tried to start the ignition of her car 14 times after stopping.

Nancy and Karim Iskader have sued Grossman, Erickson, the City of Westlake Village and Los Angeles County in a civil lawsuit over the boys’ deaths. That lawsuit is ongoing.

“Ms. Grossman is exercising her constitutional right to contest the two murder charges and have a jury determine the outcome,” attorney Brian Panish, who is representing the Iskanders in their civil suit, told Law&Crime in an email. “We look forward to the trial on the merits when the jurors members of the community will deliver a verdict and speak the truth based on the evidence they hear.”

Court records show that Erickson, who also played for the Minnesota Twins, Baltimore Orioles, and New York Yankees in a career that lasted from 1990 to 2006, has been charged with reckless driving. His next appearance is set for Aug. 23.

Read the Iskanders’ complaint against Grossman and Erickson, below.