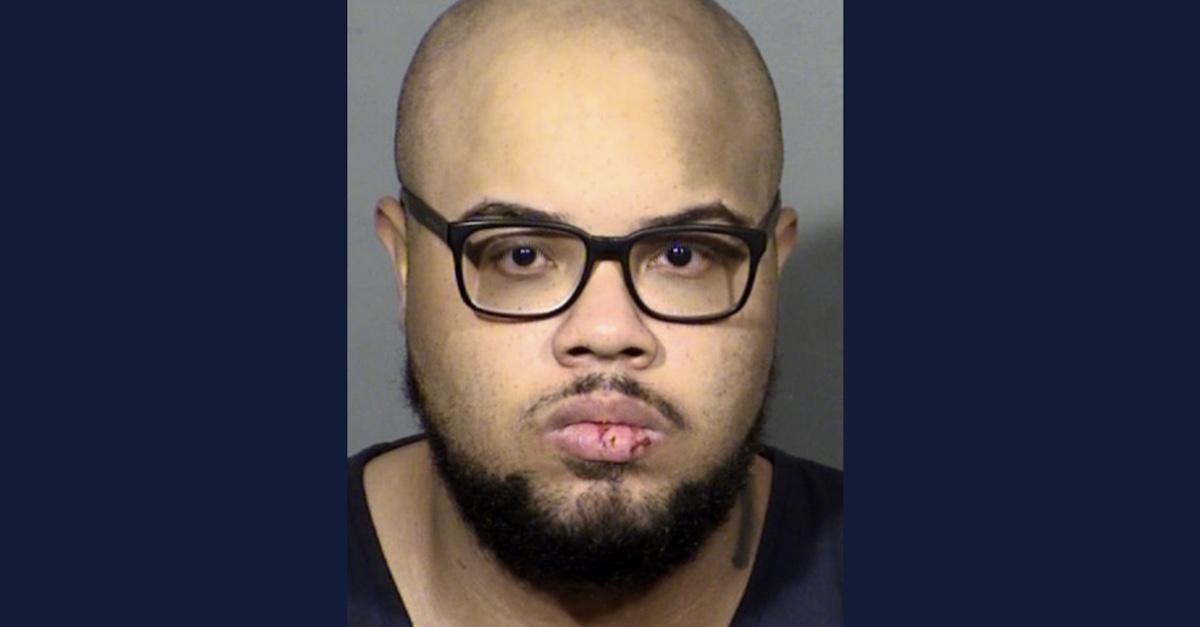 A 28-year-old man from Las Vegas, Nevada faces attempted murder charges after he allegedly ambushed a 3-year-old family member and repeatedly stabbed her with a knife in a purported bid to “save her” from “demons.” Authorities said it happened as other relatives were studying the Bible.

According to a Las Vegas Metropolitan Police Department (LVMPD) arrest report obtained by Law&Crime, Alan M. Wilson on March 31 stabbed the toddler out of nowhere as she ate dinner. Documents indicate that the victim is Wilson’s niece (his half-brother is identified as the victim’s uncle). Authorities said the stabbing occurred at a home where five family members had gathered.

The toddler was “sitting at the kitchen table eating butter noodles” as Alan Wilson was “pacing back and forth in the hallway between a bedroom and the kitchen table where [the victim] was sitting,” documents said. “[Wilson’s half-brother] said [the pacing] is not unusual behavior for Alan and he believes that Alan does this as a a habit he developed in solitary confinement in prison.”

The witness said that the pacing went on for about a half an hour until the family’s “bible study” session began. That’s when Wilson allegedly walked up behind the victim “as if to hug her” but stabbing her repeatedly in the side “in an underhand motion.”

Police said Wilson then got into a physical altercation with two male family members who moved to disarm him, leading one of the two intervening men to suffer a stab wound to the right hand. Documents said the man needed “multiple stitches” and will need the opinion of a “hand specialist” who will “determine if their is any long-term damage to his tendons.”

Wilson allegedly said that he stabbed the girl because he believed he had to eradicate demonic forces.

“I need to get the demons out of her. I need to save her,” the suspect “continually” said, according to the affidavit.

Family members said the suspect previously served time in prison for “injury a lady during a robbery,” the arrest report continued. Wilson had also “physically attacked family members” and was recently released from what appears to be a medical facility (the facility is redacted from documents for apparent medical privacy reasons) on March 25—six days before the stabbing.

Documents also indicate that Wilson has been diagnosed with a condition, though that is redacted.

Wilson said “What did I do?” before he left the residence, according to another family member. She said her husband and son struggled with Wilson over the knife in the kitchen. She also said that Wilson got out of prison in 2021 but had been “in and out of” the aforementioned redacted facility.

According to cops, the defendant stabbed the victim 11 times, including seven times in the back. The toddler also sustained stab wounds to a forearm, hand, triceps, and armpit. The arrest report further said that the victim suffered a punctured right kidney, a lacerated spleen, and a “penetrating wound to her posterior aorta.” There was even a “hole on the right side of her colon.”

Cops said that there was a “blood trail from the front door to the driveway” at the scene of the stabbing.

After the stabbing, Wilson allegedly left the scene. Other family members, meanwhile, worked to get the toddler to the hospital. Authorities said the suspect was arrested under an hour after the stabbing following the tracking of his cellphone to a 7-Eleven.

Cops said Wilson was “pacing back and forth in the parking lot” and took a “hit off his vape pen” before dropping the device and surrendering.

It’s unclear what the 3-year-old’s condition is as of Monday morning, but she will reportedly have to undergo more surgeries. When the girl was rushed to the hospital she was listed in “extremely critical” condition.

In an ensuing interview with police, the suspect allegedly asked if the victim was okay and asked for an attorney. That was apparently the extent of the interaction between Wilson and law enforcement at Las Vegas Metropolitan Police headquarters.

Clark County Detention Center records reviewed by Law&Crime show that Wilson faces charges of attempted murder, child abuse, and battery with a deadly weapon. It’s unclear if Wilson has an attorney at this time.

You can read the arrest report below: