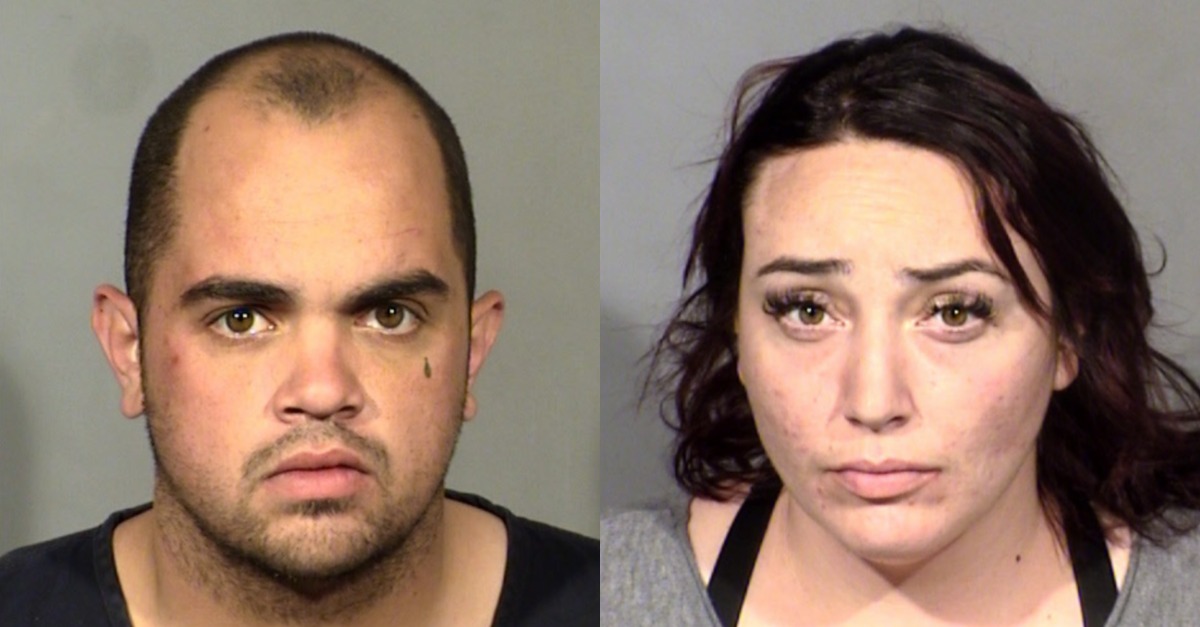 Las Vegas police say that the May shooting deaths of a man and a woman who were found in separate locations might be connected to an unpaid debt on a stolen vehicle.

Eric Mosley, 31, and Sandra Cruz–Lopez, 39, were found on May 9, both shot to death. Mosley was found in his trailer, and Cruz-Lopez, his ex-girlfriend, was found in a burning truck on Mother’s Day around 6 miles away. Now, police are saying that they might have been killed over an unpaid debt on a stolen car — debt that amounted to somewhere between $100 and $800, local CBS affiliate KLAS reported.

Las Vegas court records show that Antonio Barry-Edwards, 24, and Jordan Monahan, 30, are both facing charges of kidnapping, murder and arson.

They are accused of taking Cruz-Lopez from a trailer she shared with Eric Mosley to an intersection at the eastern edge of the city and shooting her approximately seven times, once in the head, KLAS reported, citing Monahan’s police report.

Witnesses reportedly told police that the Cruz-Lopez was killed in retaliation for money that Mosley owed Barry-Edwards for a stolen truck but didn’t pay, KLAS reported.

One witness told police that Barry-Edwards asked Monahan to shoot Cruz-Lopez, but she hesitated, so he shot Cruz-Lopez instead, KLAS reported. It was reportedly Monahan’s idea to use WD-40 to light the truck on fire, KLAS said.

Family members told KLAS that Cruz-Lopez and Barry-Edwards did not know each other.

“It was a vicious death,” Cruz-Lopez’s mother, Jacquelina Anzalone-Rien, told KLAS, adding her daughter left seven children behind. “I want everyone to know that she had family. She wasn’t just a nobody out there in Las Vegas. She had a good heart. She was a good person.”

Barry-Edwards is also accused of shooting and killing Mosley on the same day he and Monahan allegedly kidnapped and killed Cruz-Lopez.

Mosley was found dead inside the trailer in a North Las Vegas parking lot early on May 9.

“I know my son didn’t deserve to be killed, for whatever reason they say happened or what happened, he didn’t deserve death for that,” Mosley’s mother, Celest Wedermyer, told KLAS. “I need justice. I want justice.”

Barry-Edwards was already in jail on kidnapping charges stemming from a hostage situation at a Las Vegas motel in late May.

Barry-Edwards, police say, had sawed through a motel wall in order to kidnap a 4-year-old boy and his babysitter while trying to flee from police. After several hours, Barry-Edwards allowed the 4-year-old boy to leave through the hole in the wall. The babysitter was in the hotel room overnight and allowed to leave the next morning. In all, the standoff took place over the course of 29 hours.