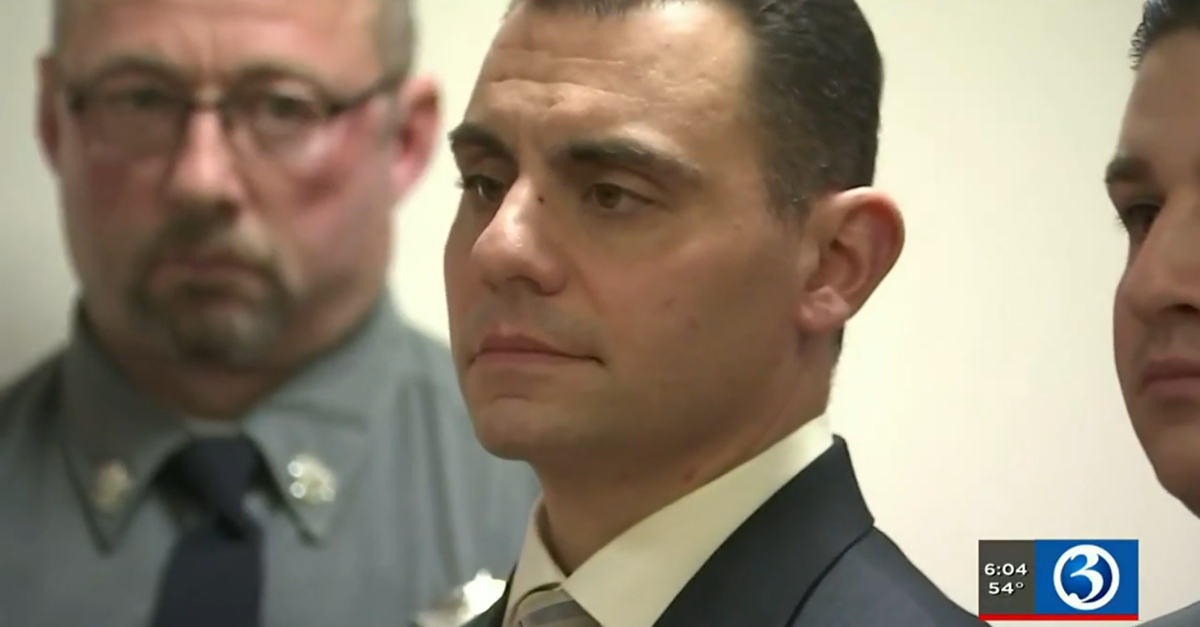 After an electronic device undermined the defendant’s version of events, jurors in Connecticut convicted a man on Tuesday of murdering his wife just before Christmas in 2015.

Richard Dabate, 45, testified that it was actually a masked intruder who shot 39-year-old Connie Dabate to death, but prosecutors dismissed that claim as a fabrication. In truth, prosecutors said, Dabate killed the victim after their marriage began to fall apart and his mistress became pregnant with his daughter.

As part of the evidence, prosecutors presented the slain woman’s Fitbit data to show she was moving around when her husband claimed she was dead.

The murder took place on the morning of Dec. 23, 2015 at the couple’s home in the town of Ellington, according to local reports.

Dabate testified Thursday that he returned home to pick up his laptop but found a large, masked man upstairs in their home, according to The Hartford Courant. In his version of events, the individual robbed the husband, chased Connie into the basement and shot her, and then zip-tied Richard Dabate to a folding chair and stabbed him. Defense lawyer Trent LaLima maintained Dabate was consistent with his story over time. He said his client’s behavior was normal on the morning of the murder, such as searching for a non-spoiler review of a new Star Wars movie.

The prosecution reportedly asserted that Dabate plotted the killing, and that he did so because he feared being ostracized as his apparently idyllic life started to fracture.

“Time is moving on,” said State’s Attorney Matthew C. Gedansky, describing the defendant’s state of mind. “The pressure is mounting, the baby is coming, and the defendant’s worst fears are going to be realized.”

Sara Ganzer testified that she and Richard Dabate had an affair. She said that she and Dabate knew each other for more than 30 years–since junior high, according to reports from WTNH and NBC Connecticut. They were friends throughout that time, but the relationship turned physical in May 2015, she said. Ganzer testified to learning she was pregnant in June 2015. In her account, Dabate gave her updates about getting divorced from his wife. Ganzer pressed him on determining if he was going to stay or leave, but she said she did not want to “blow up” his family. She had planned on raising her daughter alone, she said.

She and Dabate have been co-parenting the child since 2019, Ganzer added. She testified under cross-examination with the defense that Dabate never discussed plans to kill or hurt Connie. Neither did he confess to the murder.

In Dabate’s version of events, the intruder’s crime happened at around 9 a.m. that day, according to WFSB. Prosecutors said Connie’s Fitbit data showed her moving around for an hour after that.

The Jury in the Richard Dabate murder trial has wrapped up for the day without reaching a verdict. The jury deliberated for more than two hour and will start up again Tuesday morning! pic.twitter.com/K6mucBtLbq

LaLima argued that Fitbit and other data used to track his client’s location were not 100 percent reliable. Other evidence for the defense reportedly included unknown DNA at the home and on the gun used to murder Connie. A person cleaning the house said she may have spotted a dark green figure moving past the window at the time of the crime. The prosecutor said that no one saw the supposed intruder fleeing.

NOW: Day 2 of jury deliberation underway in the #RichardDabate murder trial. The jury is currently re-listening to testimony from a forensic examiner who explained process of building DNA profiles. She testified that DNA from unknown person was found on gun that killed Connie. pic.twitter.com/2PwBnNY3zz

The defense reportedly plans to appeal.