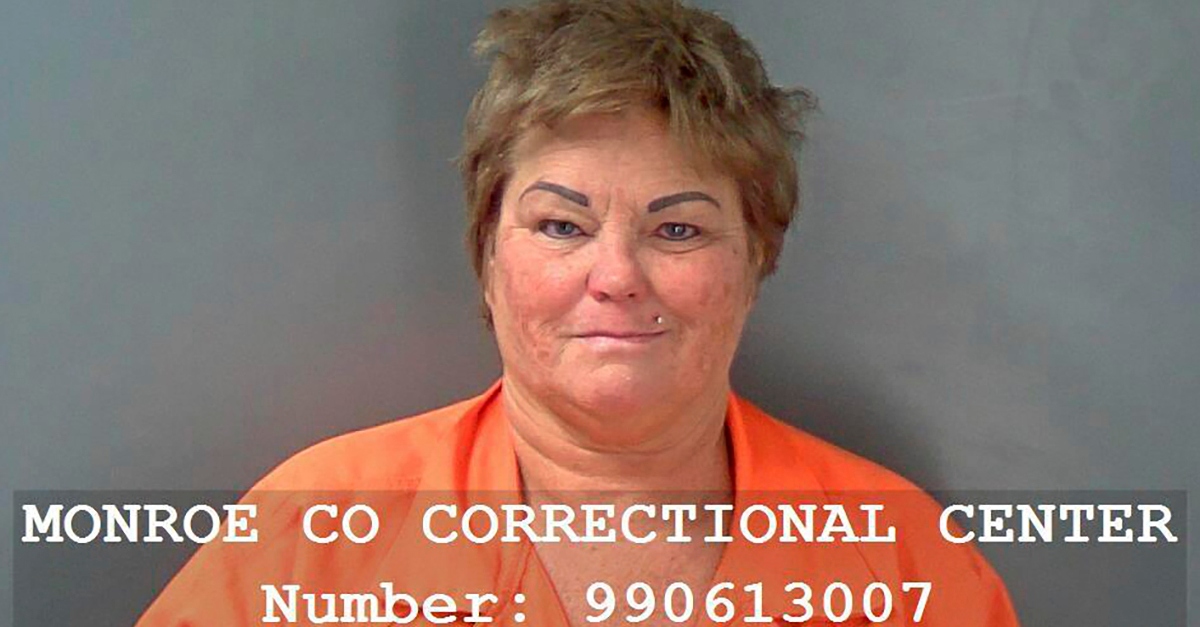 This photo provided by Bloomington Police Department shows Billie Davis. Davis has been charged after an 18-year-old Indiana University student repeatedly was stabbed in the head on a public bus in an attack the school says was because the victim is Asian. The victim told investigators she was standing and waiting for the exit doors to open on a Bloomington Transit bus Wednesday, Jan. 11, 2023 when another passenger began striking her in the head, Bloomington police said in a release. (Bloomington Police Department via AP)

An Indiana woman allegedly stabbed another for being Asian. Billie R. Davis, 56, tried to kill the 18-year-old woman on a city bus in Bloomington on Wednesday afternoon, authorities said.

“The assault reportedly occurred when the bus stopped at the intersection of W 4th Street and the B-Line Trail,” cops wrote. “A witness that had been on the bus at the time the assault occurred followed the suspect on foot and provided responding officers with updated locations of the suspect until officers arrived in the area and detained the woman.”

Officers said they found the 18-year-old victim and called for an ambulance because she was bleeding from the head.

“The victim reported to investigators that she had been riding the Bloomington Transit bus and had stood up to exit the bus on 4th Street at the B-Line Trail,” officers wrote. “She said that as she was standing and waiting for the bus doors to open, another passenger on the bus began to strike her repeatedly in the head, which resulted in immediate pain. The suspect also exited the bus and began to walk towards Kirkwood Avenue.”

Davis, a Bloomington woman, was booked into jail originally just for battery, but doctors determined the 18-year-old woman had received multiple stab wounds to the head, police said.

“Investigators were able to access camera footage from inside the bus which captured the assault,” officers wrote. “The footage showed that the suspect and victim had no interactions prior to the suspect stabbing the victim multiple times in the head as the victim waited for the bus doors to open.”

Surveillance footage showed that neither woman interacted with each other before the stabbing, according to documents obtained by WXIN. Instead, Davis allegedly pulled a folding knife from her own pocket and stabbed the victim seven times. Then she put the knife in her pocket and returned to her seat, officers said.

Investigators spoke to Davis again while she was in jail. The alleged motive was racism. Davis allegedly said she did it for the victim “being Chinese,” and this “would be one less person to blow up our country.”

A jail staffer told Law&Crime on Sunday that Davis is also held on a count of aggravated battery. She is held on a $100,000 surety bond plus $500 cash.

Bloomington police ask that anyone with information on this incident. call Detective Rob Shrake at (812) 349-3352.

The 18-year-old woman attends Indiana University, according to WRTV. The school touched on the alleged facts of the case in a statement released Friday.

“This week, Bloomington was sadly reminded that anti-Asian hate is real and can have painful impacts on individuals and our community,” said James C. Wimbush, Vice President for Diversity, Equity, and Multicultural Affairs. “No one should face harassment or violence due to their background, ethnicity or heritage. Instead, the Bloomington and IU communities are stronger because of the vast diversity of identities and perspectives that make up our campus and community culture. To our Asian and Asian American friends, colleagues, students, and neighbors, we stand firmly with you. For members of our community who may find support helpful, counseling services are available to all faculty, staff, and students.”