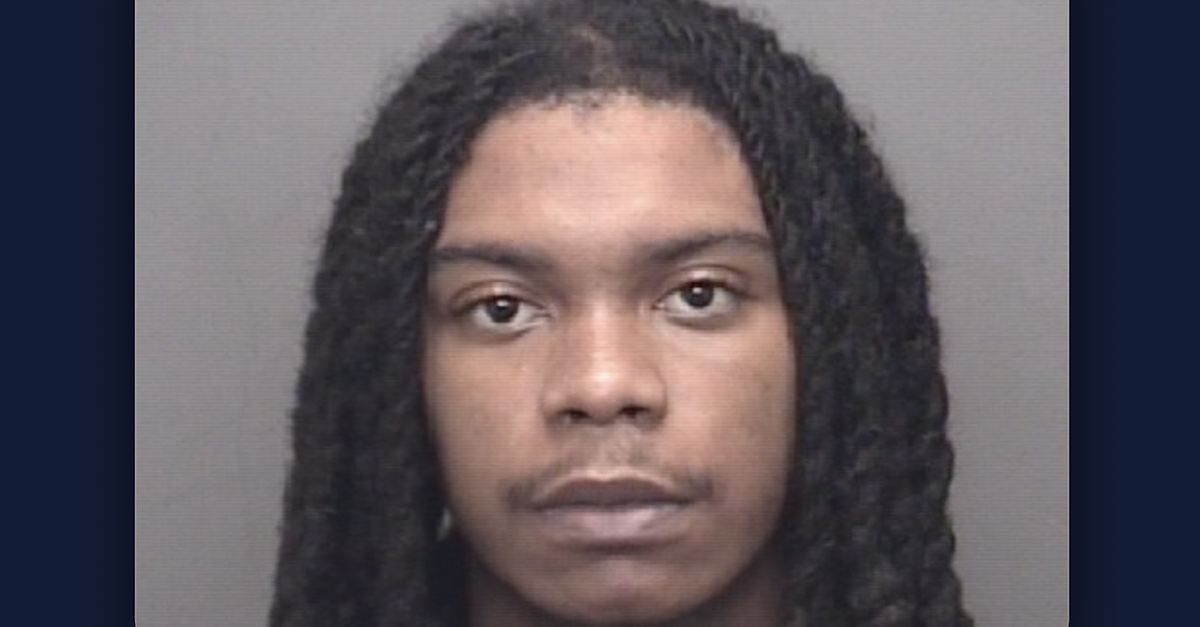 An 21-year-old man in Indiana was arrested this week for allegedly beating an 18-month-old boy to death while the baby child was in his care.

Tavion Donte Cobb was taken into custody on Wednesday and charged with one count of knowing and intentional murder and two counts of neglect of a dependent resulting in death in the death of Nyheim Cashton Groves, court records reviewed by Law&Crime show.

All three charges against Cobb are Level 3 felonies. Per the court docket, one of the neglect counts allegedly stems from Cobb placing Nyheim “in a situation that endangers the dependent’s life or health.” The other neglect charge alleges that he deprived the child of “necessary support” in  failing to seek medical assistance.

Authorities also charged Cobb with one count of failing to appear for a warrant, a Level 6 felony.

According to a press release from the Evansville Police Department, officers at approximately 11:30 a.m. on Tuesday, Sept. 27 responded to a call about a severely injured child brought to the emergency room at Deaconess Midtown Hospital. Police say the unresponsive child, later identified as Nyheim, was brought to the hospital in a private vehicle by his mother, Germia Groves.

The medical staff at the facility attempted to perform life-saving measures on the toddler and they were able to recover a pulse, but the boy ultimately succumbed to his injuries. He was pronounced dead early Wednesday morning.

EPD detectives arrived at the hospital a short while after Groves and Nyheim and opened an investigation into the circumstances of Nyheim’s death, authorities said.

According to a report from the Evansville Courier & Press, personnel at the Deaconess emergency room told investigators that they believed Nyheim had been dead for multiple hours before he arrived at the hospital, noting that the toddler’s core body temperature was measured at only 70 degrees.

A hospital staffer reportedly told investigators that Nyheim had sustained a “large burn on the left side of his face,” a “severe head injury,” and what appeared to be a cigarette burn on the back of his knee.

In an interview with investigators, Groves reportedly told police that she arranged for Cobb to watch Nyheim overnight on Monday, something she said she did regularly. Evansville NBC affiliate WFIE reported that Cobb was Groves’ boyfriend.

However, on Tuesday morning, Groves said she received a call from Cobb, who “informed her of an incident that happened causing injury to her son,” the press release states.

Shortly after the two spoke, Cobb allegedly returned Nyheim to his mother. The boy was allegedly already unresponsive and Groves drove directly to the hospital.

A copy of the probable cause affidavit obtained by the Courier & Press reportedly said that Cobb referred to himself as Nyheim’s “stepdad” in an interview with detectives, despite not being married to Groves. Cobb reportedly told police that he took the boy to the park at approximately 2 p.m. on Monday before taking him to a cookout later in the day where the child was mildly hurt.

Cobb reportedly brought the boy back to his mother that evening uninjured, but offered to pick him up at 1 a.m. on Tuesday after Groves sent him a video of the toddler “crying and not wanting to go to sleep.” Nyheim was reportedly uninjured in the video. They reportedly agreed that Cobb would bring the boy back at 6:15 a.m. for daycare.

“But about 8:50 a.m., police said Cobb texted the child’s mother to say the boy was ‘sick and throwing up,” the report states. “In a Facetime call placed shortly after this initial text, the mother told police her son did not appear to be awake and had a visible mark to his face.”

Cobb reportedly told Groves that the boy got hurt when he fell off his bike. When Cobb brought the boy back at 10:55 a.m., the victim was reportedly already unresponsive.

Police reportedly said that Cobb was unable to account for the boy’s head injury or doctors’ determination that Nyheim had been dead for several hours before arriving at the hospital.

“Cobb stated at the hospital that the child woke up and ate breakfast prior to going back to [Groves], which I was advised by medical staff would have been impossible,” the detective reportedly wrote in the affidavit. “Cobb offered no further explanation of how the child was injured.”

Cobb is currently being held without bond at the Vanderburgh County jail. He is scheduled to make his initial appearance in court on Oct. 4.

Groves set up a GoFundMe page to help pay for Nyheim’s funeral expenses.

“I’m asking for is to help bury my child. Nothing more nothing less I just need help,” Groves wrote. “Give what you can even if it’s just a quarter.”