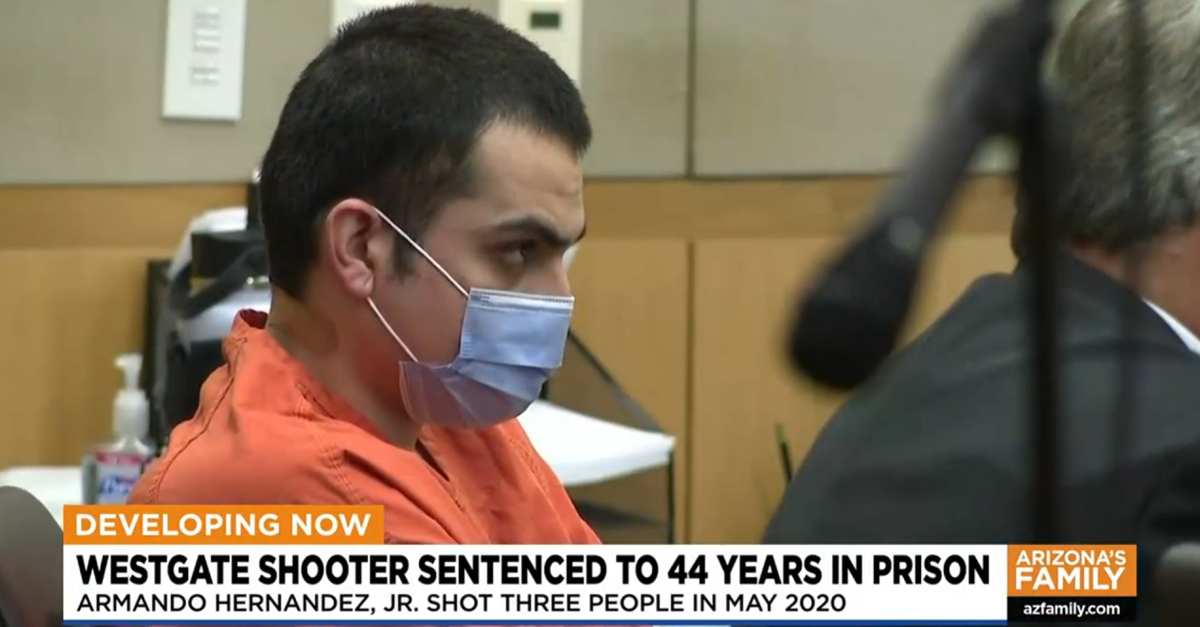 A self-described incel received a 44-year prison sentence for injuring people at an Arizona mall shooting. Authorities have said that Armando Hernandez, 23, targeted couples at the Westgate Entertainment District on May 20, 2020 because he was angry women did not want him, felt that he had been bullied, and wanted respect. He planned to target 10 people, though he denied wanting to kill anyone, authorities said.

Of the three injured victims, a 19-year-old man was in critical condition. A 16-year-old girl went to a hospital with non-life threatening injuries, while a 39-year-old woman got hurt did not to leave for a hospital.

Hernandez pleaded guilty in April to two counts of attempted first-degree murder and two counts of aggravated assault. Indicted on a total of 39 charges, Hernandez took a deal for a possible 19- to 44-year prison term. The judge on Friday handed down the maximum prison sentence.

“Those at Westgate on May 20 not only feared for their lives but three people received serious injuries,” Maricopa County Attorney Rachel Mitchell said on Friday. “A maximum sentence for these crimes is justice. We are fortunate that the victims in this case survived and now a dangerous individual has been removed from our community.”

BREAKING: Armando Hernandez sentenced to 44 years in prison for the Westgate shooting in May 2020. Lots of emotional impact statements made in court. @12News pic.twitter.com/4LTtAcB1wW

The 16-year-old, Destiny, was hit in the leg, according to KPNX. Then-boyfriend Alfredo, 19, was struck twice in the chest.

The couple was waiting for a ride home outside of a Johnny Rockets restaurant.

“I was screaming for him on the floor,” Destiny said in a KPNX report about the plea deal. “Continuously, like nonstop.”

“Next thing you know she’s on the ground,” Alfredo said. “I just stopped in place. I felt time stop real quick and I felt the first bullet struck me. That’s when I started seeing blood come out. I was just trying to stay alive because at the same time I didn’t really want to leave her.”

“He wanted these people to feel the pain that he feels on a daily basis,” prosecutor Ed Leiter said at a bail hearing, according to KTAR. “He suffers from extreme anger. He’s very open about the fact that he has a dark side, and his dark side was coming out.”

Hernandez scouted the area, returned to his car to drink alcohol, then got his rifle and his three 30-round magazines, the authorities have said. He reportedly filmed the attack with a cell phone in one hand as he kept a rifle in the other.

I saw 2 victims with my own eyes. Not sure how many others I saw the shooter. Being told not to say anything else about details ’til I speak to police. I’m ok. Lots of shaken up people.

The defendant’s gun jammed after he shot a third person in the leg; the defendant said that victim was lucky he did not kill her. The defendant also took out the power by damaging an electric transformer.

[Screenshot via 3TV and CBS 5]