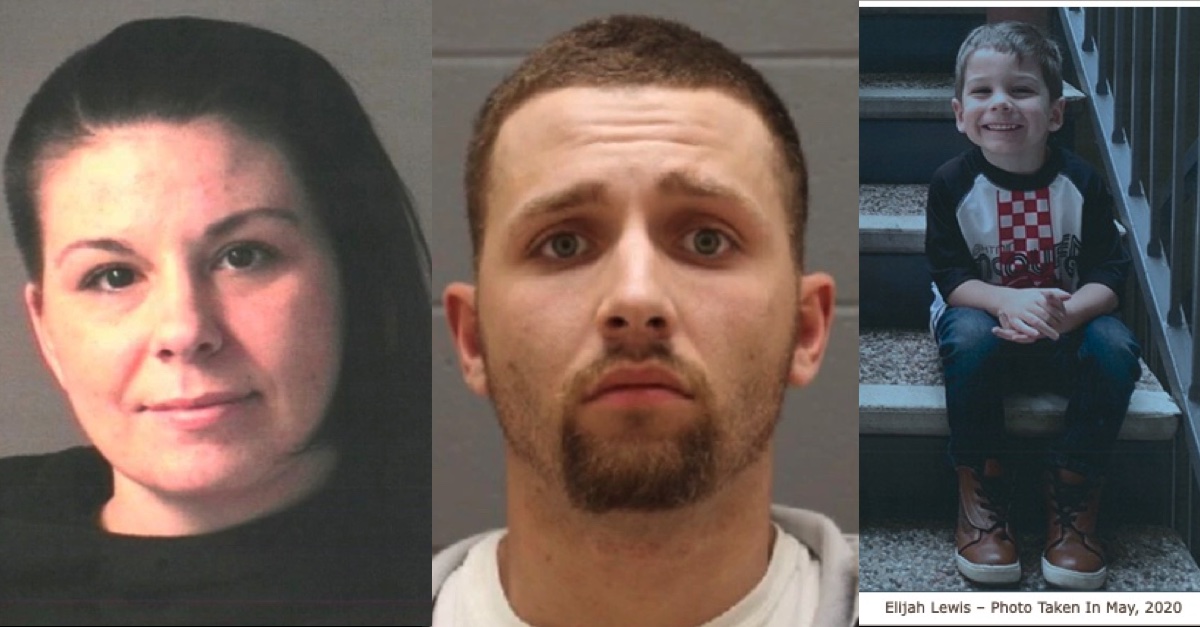 The mother of a 5-year-old New Hampshire boy whose body was found in the woods of Massachusetts in October had texted a friend months earlier that she wanted him “gone” and compared him to serial killers.

“I call him the next Ted Bundy and Jeffery Dahmer,” Danielle Dauphinais allegedly said of her son, Elijah Lewis, in a text message to a friend in June, according to a report in the Boston Globe.

After a 10-day, multi-state search, Elijah’s remains were found on Oct. 23 in a wooded area off a Massachusetts road. Authorities had been looking for him since Oct. 14.

Dauphinais was texting with Erika Wolfe, who reportedly shared the messages with the Globe. Wolfe and Dauphinais knew each other as teenagers, but hadn’t seen each other in years. The messages started when Dauphinais responded to a Snapchat post in which Wolfe was discussing her teenage son’s behavioral issues, the Globe report said.

The Globe shared the following alleged exchange between Dauphinais and Wolfe from June 22:

Wolfe: OMG I’m so sorry. Unfortunately it will probably get worse because I have had issues with him being violent & nasty since a toddler

Dauphinais: Oh I figured. I call him the next Ted Bundy and Jeffery Dahmer. It’s so sad but I have no connection with this child. His father took him at the age of one and never returned him until last may 2020. He’s been getting worse and worse. I want him gone. I can’t handle it anymore.

Dauphinais: I have to keep him in his room. I can’t trust him at all. This child is [expletive] Erica straight [expletive]

Dauphinais: Even dcyf was involved and they told me I can’t do [expletive] without his father’s concent. It’s been a [expletive] nightmare that I can’t wake up from. It’s so damn sad and I’m so sorry you’re going through this too. Ugh why us??? Is it because we were assholes as kids and it’s payback? Like I don’t get it.

Wolfe told the Globe that she had forgotten about the correspondence until October, when Elijah’s disappearance made headlines.

Wolfe said that while she was surprised by some of the comments, she assumed Dauphinais was just venting her frustrations. She also said she thought the New Hampshire Division for Children, Youth and Families (DCYF) was checking in, likely based on what Dauphinais herself had said about the agency in her messages.

She told the Globe that when she saw the reports, she got a knot in her stomach.

“I remembered those messages,” Wolfe told the Globe. “And I was like, ‘Oh, no.'”

As the search for Elijah was underway, two of Elijah’s uncles publicly pleaded with Dauphinais to share information with police, according to a report in the New Hampshire Union Leader.

“Please cooperate,” Dauphinais’ half-brother Randy Stewart said. “Please let us know where he is. Let us bring him home.”

Dauphinais’ brother John Dauphinais said that Danielle, who has five other children, has never hurt her kids that he knows of and had always treated his kids well, the Union Leader report said.

According to Stewart and John Dauphinais, Eli frequently threw temper tantrums; there were plans for him to move to California and live with an aunt whose husband worked in mental health, the Union Leader reported.

The aunt, Tracy Lyn Dauphinais, was one of the people identified in the criminal complaint. Dauphinais is accused of encouraging Tracy Lyn to tell child protective services that Elijah was with Dauphinais, even though he was not.

It is unclear why Elijah was sent to live with Dauphinais last May, according to the Globe. Lewis had described her in court records as being “violent and impulsive,” with a “history of domestic violence and substance abuse.” A 2017 decree prohibited Dauphinais from spending time with Elijah, and called for him to be solely in Lewis’ care, the Globe reported.

Read the complaints against Dauphinais and Stapf, below.