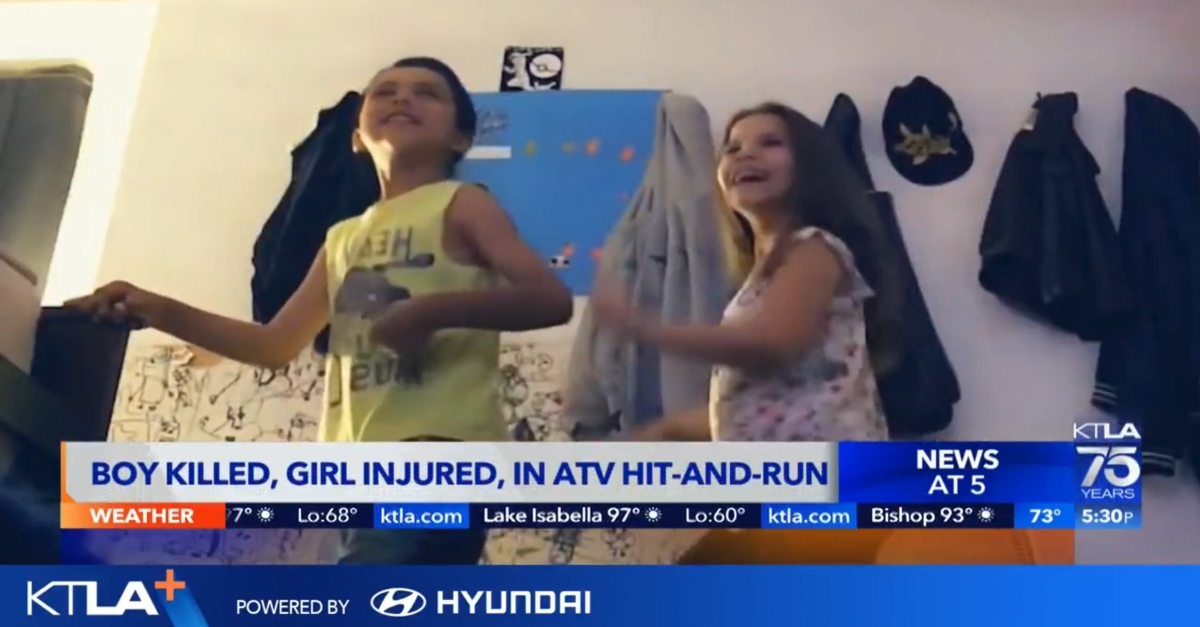 A 12-year-old boy is dead and an 11-year-old girl severely injured after an apparent hit-and-run collision between two off-road vehicles over the weekend in the California desert.

Authorities say a hit-and-run driver killed Jacob Martinez, 12, and left Christina “Tina” Bird, 11, gravely injured on Saturday as the children were riding in an ATV in the Stoddard Valley Off-Highway Vehicle Recreation Area. The California Highway Patrol is looking for the driver of the second vehicle as well as anyone else who may have been inside.

Family members say Jacob and Tina were close friends, and Tina’s family said Jacob was more like a brother to her, according to a report from local NBC affiliate KNBC.

The kids were traveling with their families on a trip to the desert in Apple Valley, California, around 100 miles northeast of Los Angeles. They were reportedly close to their families’ campsite when they were struck at around 9:00 p.m. on Stoddard Wells Road; according to the Sacramento Bee, a passerby found them.

Jacob had died at the scene. The impact of the collision was reportedly so strong, his helmet flew off.

“My nephew was mangled,” Jacob’s aunt Daisee Montano said through tears, according to KNBC. “He was trampled to death. And that person just left. He left. Tina’s fighting for her life.”

“We were told that the first person that tried to perform CPR to my nephew turned him around but the only part that turned was his top half of his body because he was so broken so we knew immediately that he was dead,” Montano told the station. “And my brother was weeping on the ground to please help his son come back to life.”

Tina was transported to Loma Linda Children’s Hospital in San Bernardino, about 60 miles south, and put on life support, according to local news station KTLA. She has reportedly sustained grievous injuries, including a severed spinal cord and several broken bones.

“She has multiple broken bones, broken femurs, fibula,” her mother Felicia Nunez said, according to KNBC. “Her spinal cord to her brain was severed.”

Authorities suggest the suspect vehicle might have been a 2021 Polaris RZR Turbo S or S4 in a “Velocity Orange Madness” color, according to The Victorville Daily Press. It would also have front-end damage and be missing its hood.

Witnesses said the driver stopped briefly after the crash, turning off the vehicle’s lights before slowly driving away, KNBC reported.

“Jacob, daddy loves you very much and we won’t stop until we get justice,” his father also said.