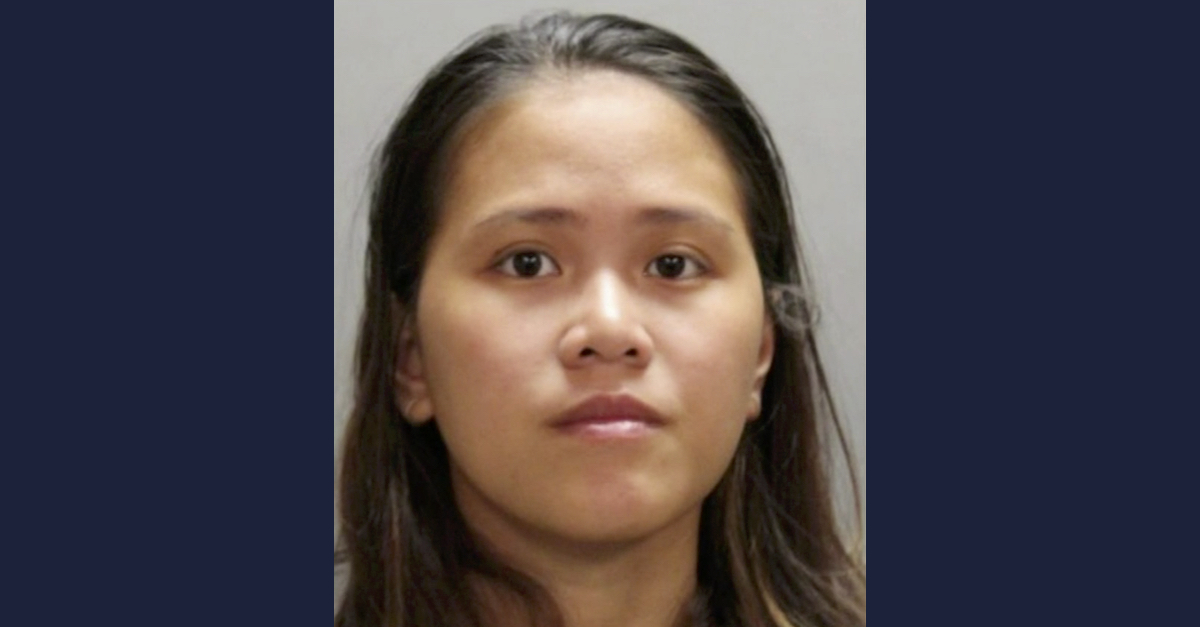 A Florida woman lost her job and has been charged with child abuse over a series of alleged incidents that occurred one day last month.

Sandrine Ramos Mangalindan, 23, stands accused of one count of child abuse with a personal/special weapon, according to a criminal complaint obtained by Law&Crime. The weapons allegedly used in the incidents are not objects at all, but are, rather, identified in the court document as the defendant’s “hands/fist/feet/teeth/etc.”

The incident in question occurred on the morning of June 24, 2022, a deputy with the Jacksonville Sheriff’s Office wrote in the complaint.

“I responded to a call for service at [redacted] in reference to an abuse/neglect of a child incident,” the complaint says. “Upon arrival, I contacted the complainant, Latasha McCray, who informed me she is the owner of the child care center. Ms. McCray advised she was notified of a potential child abuse incident upon arriving to work today. She further informed me she was then prompted to review video surveillance from Friday.”

Deputy C.K. Clinton then alleges the defendant can be seen in the footage placing the victim “on the toddler cot for a nap” but that the “victim did not want to take a nap and continuously got up and attempted to walk around.”

Around two minutes later, Mangalindan can be seen “holding the victim’s head down on the cot,” the deputy alleges, noting the child’s “face was faced down on the cot momentarily.”

The complaint goes on to allege that Mangalindan began to pull the child’s legs “as he continued to move around on the cot” but says the pulls were not forceful at first. Minutes later, however, the defendant “appeared” to become “frustrated” and allegedly “forcefully yank[ed] the victim’s left leg” in order to pull him back on the cot and “constantly make him lay down,” even as two other children were awake and moving around on their cots nearby, the deputy wrote.

McCray, the daycare owner, also told law enforcement that Mangalindan had been physically abusive with a second child and that the defendant “has been verbally abusive towards the children by yelling at them and using profane language,” according to the complaint.

Mangalindan, for her part, allegedly told the arresting officer she was simply trying to get the toddler to nap and that she is not allowed to “baby” the children at the daycare center. She then said she would never “physically hit the toddler or any child” at the center because her daughter goes there. The defendant also allegedly pointed out that, at one point, the child in question “was laughing at her, and she was playing with him.”

The daycare owner later opened up about the emotional toll watching the surveillance footage had on her in an interview with independent Jacksonville, Fla.-based TV station WJXT.

The defendant was arrested on June 28, 2022. She has since been released on bond.

“I did not observe any external signs of injury on the victim,” Clinton wrote. “At the conclusion of the investigation, I determined that the arrestee’s intentional actions could reasonably be expected to result in physical and or mental injury to the victim.”