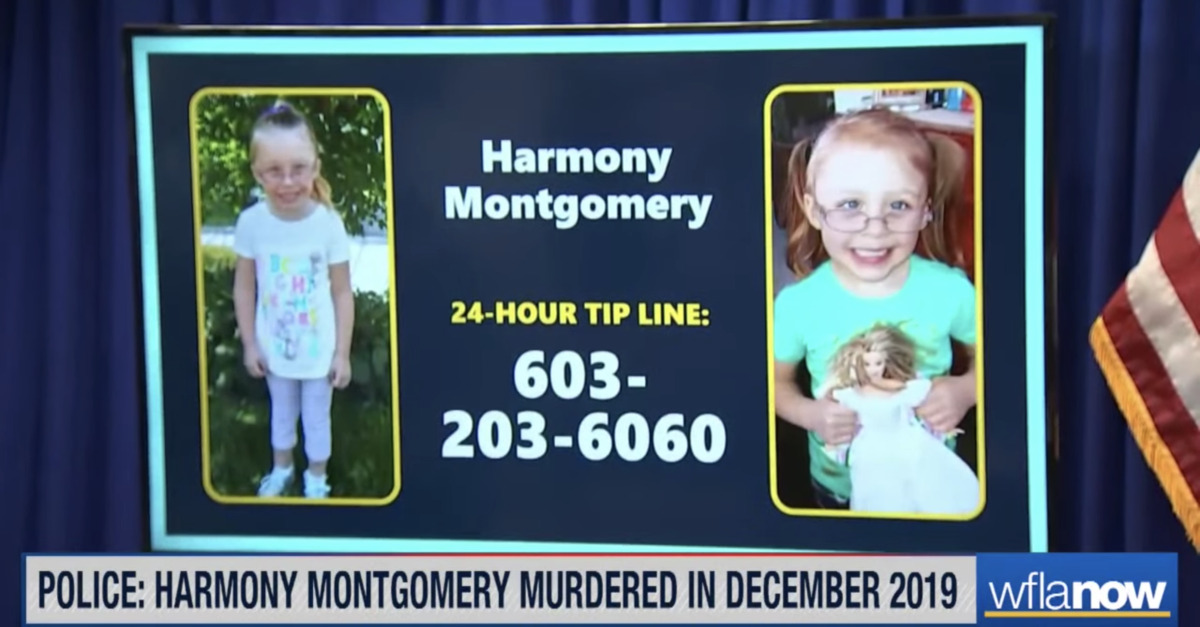 The AG said that local, county, state and federal investigators have spent thousands of hours trying to find the girl so far.

“All of these efforts have led us to conclude that Harmony Montgomery was murdered in Manchester in December 2019,” Formella said during a somber speech before the cameras just after 2:00 p.m. Eastern time.

The AG went on to say that the girl’s remains have “yet to be located” but noted that investigators have, in their possession, “recently-confirmed biological evidence” that supports the notion Harmony Montgomery was killed.

“This is now officially a homicide investigation,” Formella went on before turning the dais over to the local police chief.

“I’m beyond saddened,” Aldenberg said. “Our commitment to bringing Harmony home has not wavered. Nor will it.”

Mysteriously missing since the age of five, the girl would have turned eight years old in June of this year. But she never got the chance.

Originally from Massachusetts, Harmony Montgomery was last seen alive in New Hampshire in 2019, when she was living with her father, Adam Montgomery, and stepmother, Kayla Montgomery.

The husband and wife are since estranged. The girl only lived with them for roughly eight months before vanishing. The February prior, Adam Montgomery gained custody of his daughter for the first time after what a Massachusetts watchdog termed “missed opportunities for prevention and intervention” in a recent backwards-looking report that faulted a state attorney for not promoting “Harmony’s best interests and welfare” during a February 2019 custody hearing.

The issue of time has proven to be crucial factor in the bizarre and tragic case all along. Authorities have maintained they did not know whether the child actually disappeared in late November or early December 2019. The fact of the girl’s years-ago vanishing only made it onto law enforcement’s radar as of December 2021 – when she was belatedly reported missing by her biological mother, Crystal Sorey.

Sorey repeatedly lost and regained custody of her daughter between 2014 and 2018 due to substance abuse issues.

The girl’s cause of death was not released during the press conference.

“The homicide of this little girl rests with the person or persons who committed the act,” Aldenberg said – noting the still-extant lack of evidence and details in the case and stressing that individuals use the tip line because be believes that people “in the community have yet to come forward.”

“Do it for this little girl,” the police chief pleaded. “The time is now.”

In previous statements to law enforcement, Kayla Montgomery allegedly said she last saw Harmony Montgomery while getting ready for a work shift on a morning in the fall of 2019. In early June of this year, the issue of time reared its head again. The stepmother was charged with perjury for allegedly lying to grand jurors about the location of her job and some aspect of the timeline she provided.

Adam Montgomery and his estranged wife have been brought up on numerous charges since search efforts began this year – including child abuse charges against the father and welfare fraud against the stepmother. None of those charges, however, are technically directly related to the girl’s disappearance.

“We understand that this is truly devastating news for Harmony’s family, friends, and loved ones,” Formella added during the brief press conference. “And our hearts go out to them. Our work now turns toward getting justice for Harmony and all those who love her.”