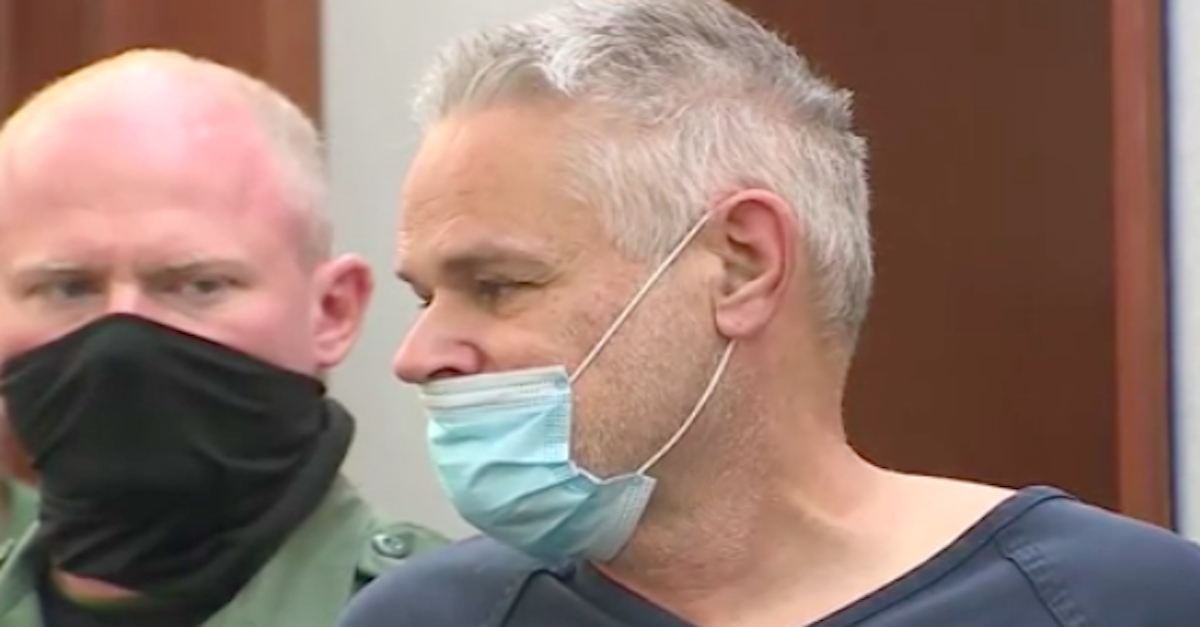 A judge in Las Vegas denied a bail request for a man who was arrested after fleeing from a traffic stop in vehicle containing the severed head and dismembered body parts of his friend.  The ruling came after the defendant’s attorney argued that his client was nothing more than “a hapless car thief who just picked the wrong car,” the Las Vegas Review-Journal reported.

Justice of the Peace Harmony Letizia on Tuesday ordered ex-felon Eric Holland, 57, to remain in jail as he awaits another hearing while facing one count of open murder for allegedly killing 65-year-old Richard Miller.

Holland’s attorney, public defender David Westbrook, attempted to convince Letizia that Holland had no idea what was in the car he allegedly stole while in the midst of fleeing from officers with the Las Vegas Metropolitan Police Department.

But Letizia sided with prosecutors.  They argued that the evidence revealed that Holland and Miller were friendly and that Holland purchased tools from a hardware store that were likely used to dismember Miller.

“Proof is evident and the presumption is great that Mr. Holland committed murder,” Letizia said in denying the defendant’s request for bond, per an Associated Press report.

As previously reported by Law&Crime, the gruesome chain of events began on Dec. 23 when patrol officers with the Las Vegas Metro Police Department attempted a traffic stop on a Toyota Tundra truck being driven by Holland near Tropicana Avenue and Duneville Street at approximately 3:42 p.m. Holland, who was wanted on several outstanding warrants, allegedly fled from the squad cars but was followed by a police helicopter.

After evading the ground patrol units, the aerial unit reportedly noticed that the driver of the truck switched vehicles. When officers attempted to pull Holland over in his second vehicle, a Chevy Avalanche, he allegedly fled again. The aerial unit maintained a visual on the new vehicle and led officers to an apartment complex located near the 4200 block of West Rochelle Avenue.

Upon arriving at the scene, officers allegedly saw Holland exiting the second vehicle. When Holland spotted the police, he allegedly “threw various items at officers in an attempt to flee” but was taken into custody after being stunned with a Tazer. Investigators subsequently determined that both trucks Holland allegedly used to flee police had previously been reported stolen, and they were both impounded.

Officers were reportedly taking an inventory of items inside the vehicles when they found coolers inside the Chevy Avalanche. The devices were taped shut, but Officer Ricardo Auerbach on Tuesday reportedly testified that one of the coolers reeked like “fish or something decaying” — leading the police to open it.

Inside the first cooler, Auerbach said he found a severed head that investigators later identified as belonging to Miller.  Dismembered pieces of Miller’s body were allegedly dispersed throughout multiple other coolers inside the truck.

Miller had been reported missing the previous month.

Deputy District Attorney Giancarlo Pesci reportedly told the court that Holland was caught on a surveillance camera in a local Home Depot buying construction-grade garbage bags and a power saw that investigators believe was used to dismember Miller.

Several firearms were also recovered from the trucks. At least one of which was used to fatally shoot Miller, Pesci said.