A high school football player is in dire physical condition after so-called friends allegedly lured him out, so another could brutally attack him. Cole Hagan, 16, survived, but serious injuries — two skull fractures and a broken clavicle — mean he is unlikely to play football ever again, his older brother said.

“Sadly, I think it’s a long shot for him to ever play football again, which was one of his biggest passions,” Cory Hagan said.

The alleged attacker Reid Mitchell, 17, is charged with aggravated assault, as are co-defendants Ayden Holland, 18, and Logan Huber, 17, according to KHOU.

Two teenagers (who authorities did not name in this document) lured Cole from a party on Friday in Lake Jackson, Texas, according to court documents obtained by KTRK. Mitchell then punched Cole Hagan in the face, slammed him to the concrete ground, and elbowed him hard three or four times, a witness said in this account.

There was hostility regarding “the victim’s perceived behavior to some of their female acquaintances,” authorities said. 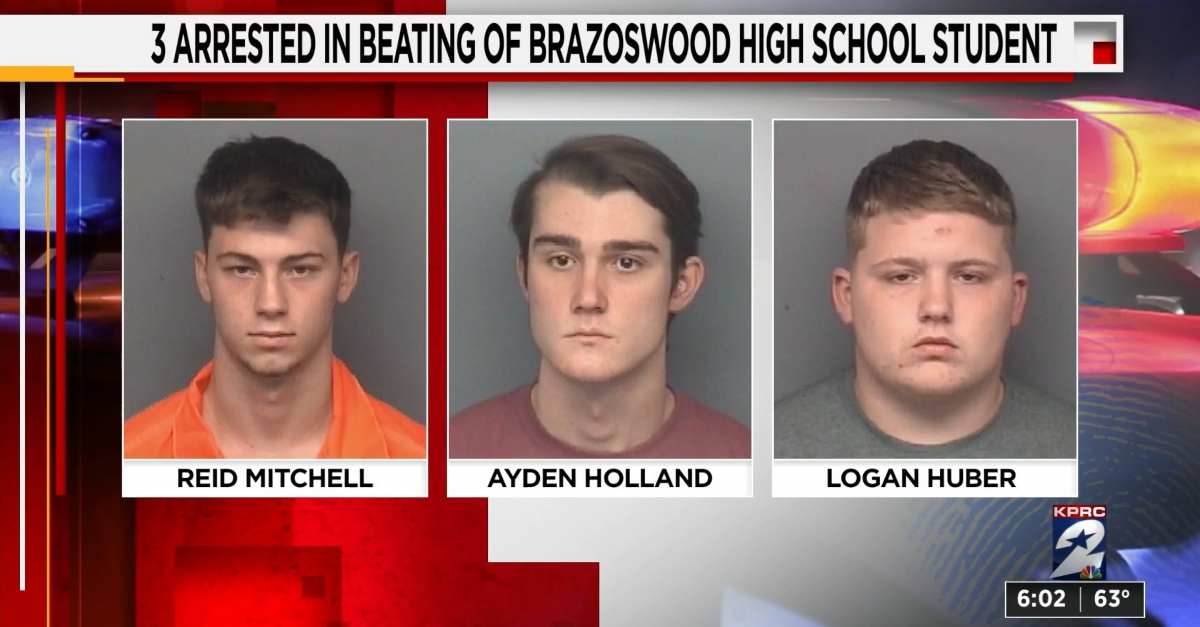 Cole, a junior and wide receiver at Brazoswood High School, was put in the intensive care unit. He was able to breathe on his own after having to be sedated and on a ventilator, family said. He took a few steps on Monday, Cory said. The older brother spoke warmly of Cole.

“Man, he loves his friends and he’s the kind of guy that you can count on,” he told KHOU.

Cory Hagan said there is supposedly video of the attack. The family is offering $25,000 for footage.

“We are aware that a Brazoswood High School student was the victim of an off-campus assault at a Lake Jackson residence by another Brazoswood student over the weekend,” Brazosport Independent School District said in a statement obtained by KTRK. “The victim is severely injured and remains in our thoughts and prayers. The student involved will not be on campus. The incident is under investigation by the Lake Jackson Police Department. If more information is discovered as a result of the investigation, we will take actions accordingly. We expect our students, staff and Brazoswood community to come together to help support the victim and family. Any retaliation or threats will not be tolerated, and students will be charged to the fullest extent of the law. This event did not occur on campus, but we will have additional police officers and counseling available for students in effort to assist them on campus beginning Monday, Dec. 6.”

The investigation is still ongoing. Lake Jackson cops asked that anyone with information call them at (979) 415-2700.