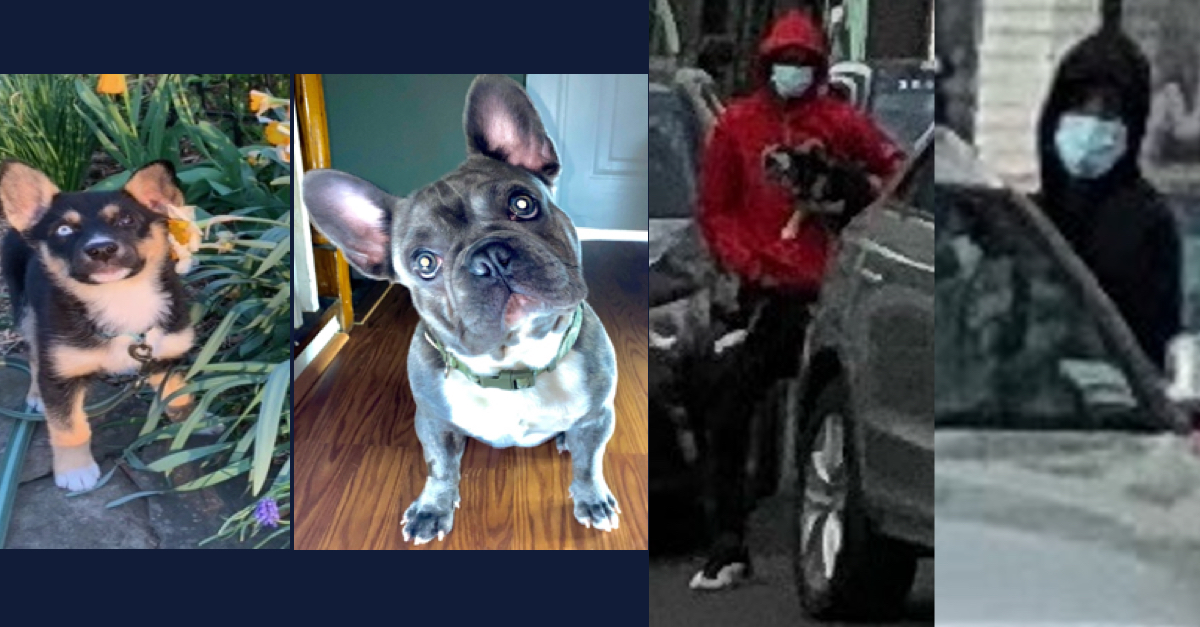 (L-R) Pablo, Bruno, the suspects in a DC-area dognapping case (via MPD)

Police in Washington, D.C. are searching for four men suspected of stealing two puppies at gunpoint, robbing another person at gunpoint, and shooting and injuring two other people in an apparent crime spree Wednesday.

A 1-year-old French Bulldog named Bruno was taken first, according to an alert from Metropolitan Police.

According to a police report, the first victim “was walking his dog when he observed a suspicious vehicle drive around the area twice.”

The victim told police that one of the suspects in the car yelled “hey” at him, and then all four men stepped out of the car and demanded that the victim hand over the dog and his phone. One of the suspects then dug into the victim’s pocket and took his wallet, the police report said.

That was at around 4:12 p.m. Less than 30 minutes later, around three miles away, the suspects allegedly struck again.

“At approximately 4:29 pm, the suspects exited a vehicle and approached the victim in the 2000 block of 8th Street, Northwest,” the MPD press release said. “One of the suspects brandished a handgun and demanded the victim’s dog and property. The victim complied. The suspects then fled the scene in the vehicle.”

“The dog is described as a 10-week-old male Australian Shepherd, with black and brown fur, a blue left eye, and goes by the name ‘Pablo,'” the MPD press release said.

The police report said that the suspects were driving a gray Audi.

Pablo’s owner, Abby Sevcik, said that the robbery happened while her boyfriend waited outside with Pablo while she was inside a CVS store. She is now hoping that a reward will help her get the dog back.

“Offering $5,000 reward for the safe return of our puppy, no questions asked, can meet wherever,” she posted on Twitter. “He was taking from us at gunpoint yesterday in DC. We just want him home.”

Offering $5,000 reward for the safe return of our puppy, no questions asked, can meet wherever. He was taken from us at gunpoint yesterday in DC. We just want him home. #SavePablo pic.twitter.com/GdUR4gzOc2

Less than 10 minutes after the suspects allegedly nabbed Pablo, they are believed to have shot two men, injuring them with non-life threatening gunshot wounds.

Finally, shortly before 4:50 p.m., the men are believed to have robbed two people who were “sitting outside an establishment.” Three suspects got out of the car, according to the police report, and ordered one of the victims to “give him his shoes or he would be shot.”

One of the suspects allegedly came behind the victim and held him while another suspect took his shoes, a pair of Air Jordans. Another suspect indicated that he had a gun and tried to take the other person’s shoes, but that second person was able to run into the establishment, the police report says.

The four victims then fled.

Metropolitan Police said they have identified two suspects. They have also reportedly recovered the car used in the alleged crime spree.

The police department is asking for the public’s help and offering a reward of up to $10,000 for information that leads to an arrest and conviction.