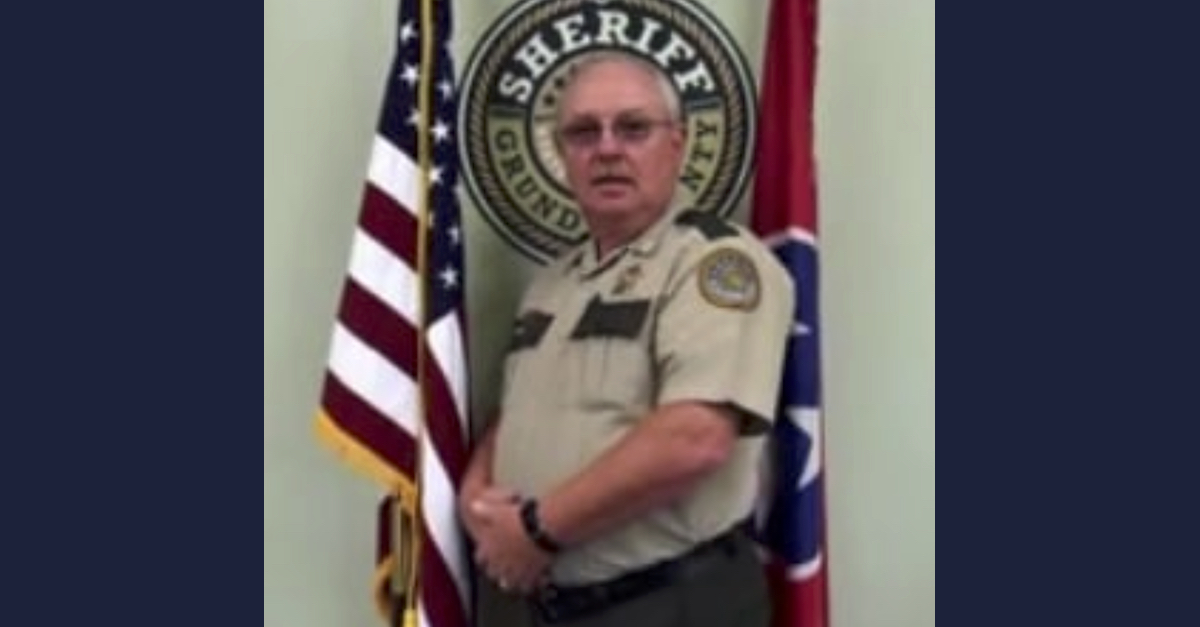 Anthony Glen Bean seen in a photo from when he served as chief deputy in Grundy County, Tenn.

A veteran and now former member of law enforcement in Tennessee was sentenced to six years in federal prison for punching people in the face after they were under arrest.

Anthony Glen “Tony” Bean, 62, was convicted on three counts of deprivation of rights under the color of law for using excessive and unreasonable force against two men in 2014 and 2017. The defendant was also charged with one additional count of the same crime for which he was acquitted by federal jurors in Chattanooga.

On Friday, U.S. District Judge Travis R. McDonough sentenced Bean to 72 months for each of the three violations of federal law – with each sentence to run concurrently. The defendant will also be subject to two years of supervised release after his stay in prison. He must also pay court fees and will have to perform 150 hours of community service.

“Nobody is above the law,” U.S. Attorney Francis M. Hamilton said. “The defendant, Anthony ‘Tony’ Bean abused his authority and violated the civil rights of arrestees by physically assaulting them while they were restrained and not posing any threat. A sentence of 72 months sends a strong message to the community that the abuse of arrestees will not be tolerated, and law enforcement officers who break the law will be held accountable for their actions.”

During his trial in June, jurors heard evidence that Bean used excessive force by punching a victim referred to only by their initials as C.G. on two occasions, while the defendant was the chief of the Tracy City Police Department in Tracy City, Tennessee.

While being arrested, C.G. was handcuffed and compliant, but Bean was merciless, the feds alleged:  he repeatedly punched the arrestee in the face, ultimately causing them pain and various other injuries.

By 2017, Bean’s job had changed – but apparently not his behavior. During an arrest that year, a similar scene played out when he was the chief deputy of the Grundy County Sheriff’s Office in Grundy County, Tennessee. This time, another compliant handcuffed individual, referred to as F.M., was again repeatedly punched in the face.

Jurors also heard evidence that Bean would occasionally brag about his use of excessive force.

Notably, the defendant’s son, who was also working as a Grundy County deputy in 2017, was also charged – in the same original federal indictment – with one count of the same crime regarding F.M.

Jurors, however, acquitted the younger Bean of the lone charge against him.

“Law enforcement officers who violate victims’ rights also violate the trust of their communities,” Deputy Attorney General Kristen Clarke said in a press release as to the elder Bean. “The Department of Justice will hold accountable those officers who abuse their authority, wherever they may be.”

Similar sentiments were echoed in a strongly worded sentencing memorandum filed in court:

The defendant repeatedly abused his authority as one of the highest-ranking law enforcement officers in Grundy County to rough up powerless arrestees in front of several other, more junior officers. The defendant has still not taken full responsibility for his offenses, a fact that sends a regrettable message to the law enforcement and Grundy County communities. A sentence at the high end of the Guidelines range would reflect the circumstances of the defendant’s repeated and flagrant civil rights violations, serve the statutory objectives of promoting respect for the law and providing just punishment, and deter those who might otherwise follow his example.

The document continued in a separate section:

Instead of using his authority to protect and serve the citizens of Grundy County, the defendant abused his power by roughing up arrestees who believed they had such little recourse that they did not even complain to law enforcement about their mistreatment by one of the community’s most senior law enforcement officers. The defendant chose as his victims restrained, intoxicated men who could not fight back, men whose many experiences with the criminal justice system made them ideal victims for him. Predictably, at trial, the defendant repeatedly attempted to attack the credibility of the victim-witnesses, who were obviously reluctant to testify in open court about their mistreatment by a well-known, veteran law enforcement officer.

“The defendant’s abuses were brazen, in that he assumed, often correctly, that he could count on the silence of the junior officers around him,” the document further asserted.  “The defendant tested and ensured this loyalty by frequently bragging about his abuses, as several witnesses testified. The defendant created in Grundy County a culture so toxic that junior officers feared reporting misconduct, and the community’s most disfavored citizens accepted excessive force as a part of their lot in life.”

Prosecutors asked for a “sentence at the high end” of the available sentencing guidelines to send a message that the “repeated and flagrant abuses of authority are unacceptable and will not be tolerated in rural communities in East Tennessee.”

The defendant claimed some of the injuries suffered by the victims were caused by other things, such as a car accident, the federal sentencing memorandum indicates.

“The defendant has never accepted responsibility for his criminal conduct,” the feds again asserted in the memorandum.

A footnote explains that the defendant uttered an outburst of sorts after he was convicted:

According to witnesses present in this courtroom, after the defendant was convicted and the Court ordered that he be detained, he yelled words to the effect, “I’m not sorry for what I’ve done, but I’m sorry for what I’ve done to my family.” As noted above, even the defendant’s frivolous nit-picking of the PSR [pre-sentence report] evinces his refusal to accept the Court’s verdict, let alone responsibility for his offenses.

A defense sentencing memorandum bemoaned the fact that the defendant was taken into custody after his conviction.  The defense suggested that Bean be sentenced to time served:

The Defendant, Anthony Glenn “Tony” Bean, faithfully served his duties as a law enforcement officer for the last 42 years. Bean routinely put his life in danger to protect and serve others. While the ensuing actions were mistakes and should not have been perpetrated, these two, and only two, instances of unique circumstances should not tarnish an otherwise immaculate record over the course of almost half a century of service where on countless occasions Bean put others’ lives over his own.

Once convicted, Bean was immediately taken into custody, and since February 2, 2022, he has been housed in a medical isolation holding cell. Bean has not seen a blade of grass or the sky since February 2, 2022. As of the date of this writing, Bean has spent 191 days without experiencing the sun on his face or breathing fresh air while being bombarded with the constant screaming of another inmate whose episodes last forty-eight to seventy-two hours that make it impossible for all 17 inmates, including Bean, to sleep. Additionally, Bean is only allowed out of his cell for one hour a day wherein he must clean his cell, shower, and used the phone and tablet. Even more, during this time, the only human contact he has is still through talking to other inmates through their locked doors. 191 days under these conditions is more than enough time to satisfy two isolated mistakes that are the only blemishes to an otherwise immaculate 42- year career in law enforcement.

The first paragraph on the second page of the defense memo seeks to remind a federal judge that Bean was “raised in a church going family.”  His pastor and his wife were among those who submitted letters to support him.

The case was investigated by the local FBI field office in Knoxville.

“When an officer betrays the oath to protect and serve, the public is put at risk and the law enforcement community is tarnished,” FBI Special Agent in Charge Joseph E. Carrico said. “The public has a right to trust that officers will do the right thing. When they don’t, the FBI remains committed to investigate and bring them to justice.”

Read the indictment and the sentencing memoranda below: