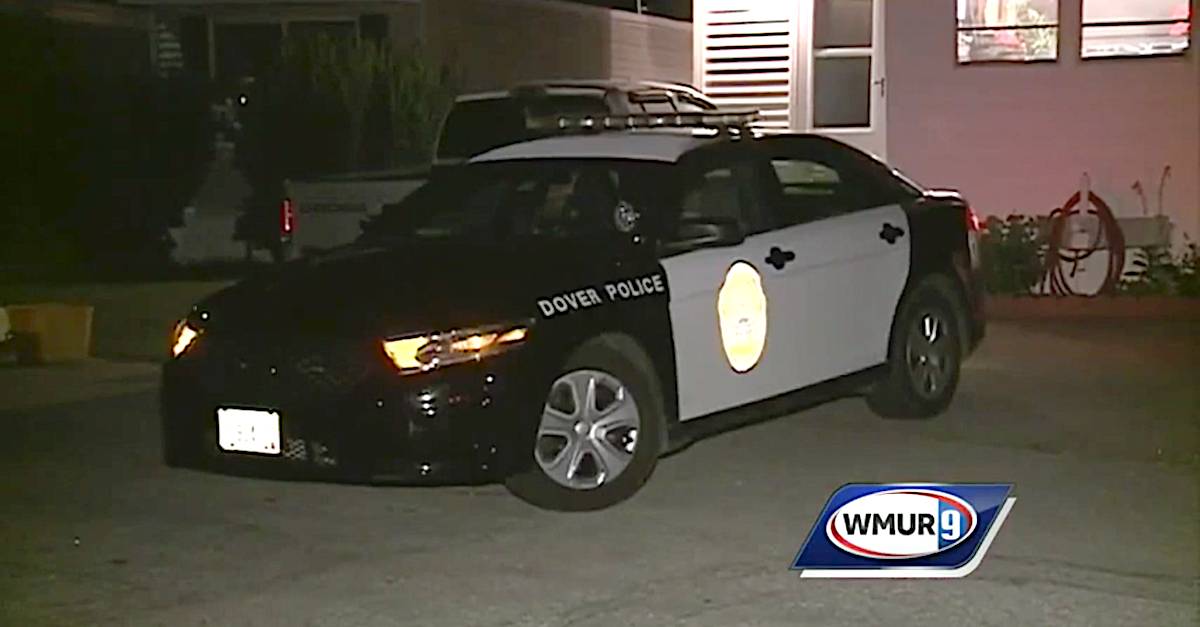 A Dover, N.H. police car is seen in during an unrelated investigation.

A member of the Dover Police Department in New Hampshire was fired after a social media campaign led to awareness about an alleged incident in which he broke two of his wife’s ribs.

“The Dover Police Department is committed to making every effort to ensure that its employees are fit to provide top-quality professional law enforcement service to the community,” Breault said in a statement posted on Facebook. “An important part of that effort is the thorough, fair, and expeditious resolution of complaints received from the public. After a thorough internal investigation that began as a result of a July 10, 2020, off-duty incident involving Officer Ronald ‘RJ’ Letendre that occurred in Rollinsford, Mr. Letendre’s employment as a City of Dover Police Officer has been terminated due to multiple violations of departmental policy.”

During that initial off-duty incident, 35-year-old Sarah Letendre was charged and arrested with simple assault. But Sarah Letendre and her family contend that R.J. Letendre, a former mixed martial arts fighter, was actually the aggressor. Social media advocates and in-person activists tended to agree with her.

A petition on Change.org summed up the advocates’ perspective as well as some of the backstory here:

Officer RJ Letendre violently abused his wife, Sarah Letendre, and had his police friends harass her as she tried to find safety. Studies have shown that around 40% of all police officer’s family members experience domestic abuse, and the Dover PD would be foolish to think they are immune from this horrifying statistic. Demand that Officer Letendre be put on leave while investigations are carried out into the events, and that Sarah is brought justice by removing violent officers from the force.

Officer Letendre has filed charges against his own wife for scratches made out of self-defense, and he is trying to get full custody of their young children. Let the Dover PD and local officials know that we will not tolerate abuse against women and police brutality and unaccountability [sic].

Protesters assembled in downtown Dover in late July to call attention to what they perceived as a grave miscarriage of justice in Sarah Letendre’s case, highlighting her medical discharge papers which showed the multiple injuries she suffered as evidence of her innocence and as evidence of her husband’s culpability.

Demonstrators marched from a local park to the police station holding signs that read “Justice for Sarah” and “No Justice, No Peace” as well as other messages which drew attention to her injuries.

While the husband’s firing was welcomed, many are hoping that more punishment is forthcoming.

“I think it’s great, but I’ll be much happier once they charge him with an actual crime,” Jessica Newman, Sarah Letendre’s sister told Foster’s Daily Democrat, the local newspaper in New Hampshire’s seacoast region.

R.J. Letendre has yet to be criminally charged over the alleged dislocation of his wife’s ribs.

“I think the public has a right to know anytime a public servant violates policy,” Newman added, commenting on the tight-lipped stance taken by local police. “They should have to say why and what he did. I’m in the military, I’m a public servant, I think our actions should be transparent.”

Sarah Letendre was originally arrested after she allegedly bit and scratched her husband and then left the scene of the incident.