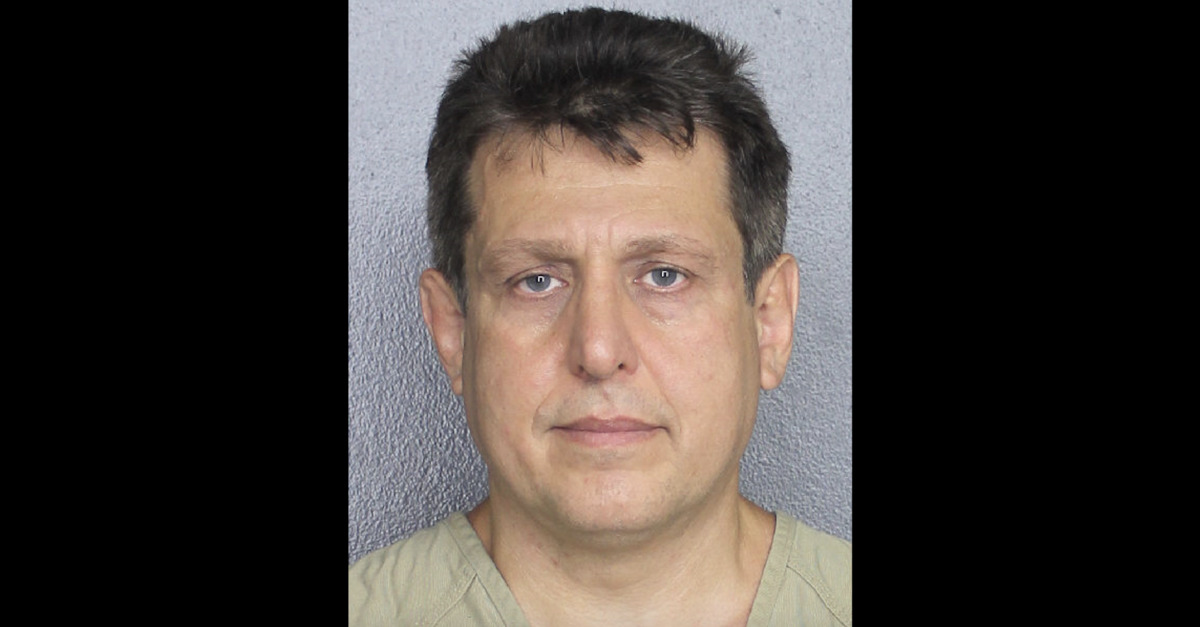 A Florida man was charged with child abuse stemming from a dispute about a COVID-19 mask mandate at a high school in Fort Lauderdale.

Dan Bauman, 50, was arrested on Wednesday by the Fort Lauderdale Police Department, who charged him with child abuse that does not cause great bodily harm, according to court records reviewed by Law&Crime. The incident allegedly occurred at Fort Lauderdale High School early that morning, when an unidentified student approached the defendant and expressed their dissatisfaction with his frequent anti-mask protests.

“I’ve had enough for four days,” the student allegedly told Bauman, according to an arrest affidavit obtained by Law&Crime.

The student then allegedly attempted to grab the defendant’s cellphone “as he was recording,” according to the police report.

After that, Bauman allegedly “pushed the child by the shoulder and grabbed her hand,” FLPD Officer Paul V. Johnson attested.

Johnson went on to allege that Bauman then began “twisting” the girl’s “arm in an aggressive manner,” which caused the officer and campus security “to pull the def[endant] off the child.”

The arrest report also notes that “the incident was captured” on video by Johnson’s body-worn camera. The officer said he made sure to turn on his recording device because Bauman had been “known to cause disruption” as an anti-mask demonstrator.

“While working in the capacity of School Resource Officer at Fort Lauderdale High School and standing at the entrance to the campus as students were getting in, I observed the listed def-Dan Bauman walking his daughter in,” the affidavit says. “I activated my BWC because the [defendant] is known to cause disruption due to protesting the school board;s [sic] mask policy.”

Johnson’s body-worn camera footage has yet to be released publicly.

“Because it is an arrest, the State Attorney has to present discovery in court before it can be released,” a spokesperson for the department told Law&Crime when asked about the availability of the footage.

After the alleged altercation, Bauman was immediately arrested and booked into the Broward County Jail.

On Thursday morning, attorney Cory C. Strolla entered two notices of appearance on behalf of the defendant, one of which notes that the lawyer intends to appear via Zoom in an initial appearance for his client. Court records, however, note that the case is still pending. The case has been assigned to Judge Thomas J. Coleman, who sits on the bench for the Seventeenth Judicial Circuit of Florida.

Law&Crime reached out to Strolla for comment on this article but no response was forthcoming at the time of publication.

An affidavit in the case was also filed by Isabel De Los Santos, who says she is Bauman’s daughter.

“I am the daughter of the Defendant and was a witness to the entire incident with my father,” the affidavit begins. “At no time did my father harm, intend to harm, or try to harm the female student who stole my father’s phone from his hands.”

“At no time did any officer or school agent or employee try to assist my father in retrieving his lawful private property that was unconsent ally [sic] ripped from his hands, forcing my father to try and retrieve his personal private property from the female student,” the filing continues. “At no time did my father use any physical force against the female student who unlawfully snatched my fathers’ phone while he was videotaping my personal encounter with school officials on a private and personal matter on my behalf.”

Read the police affidavit below: