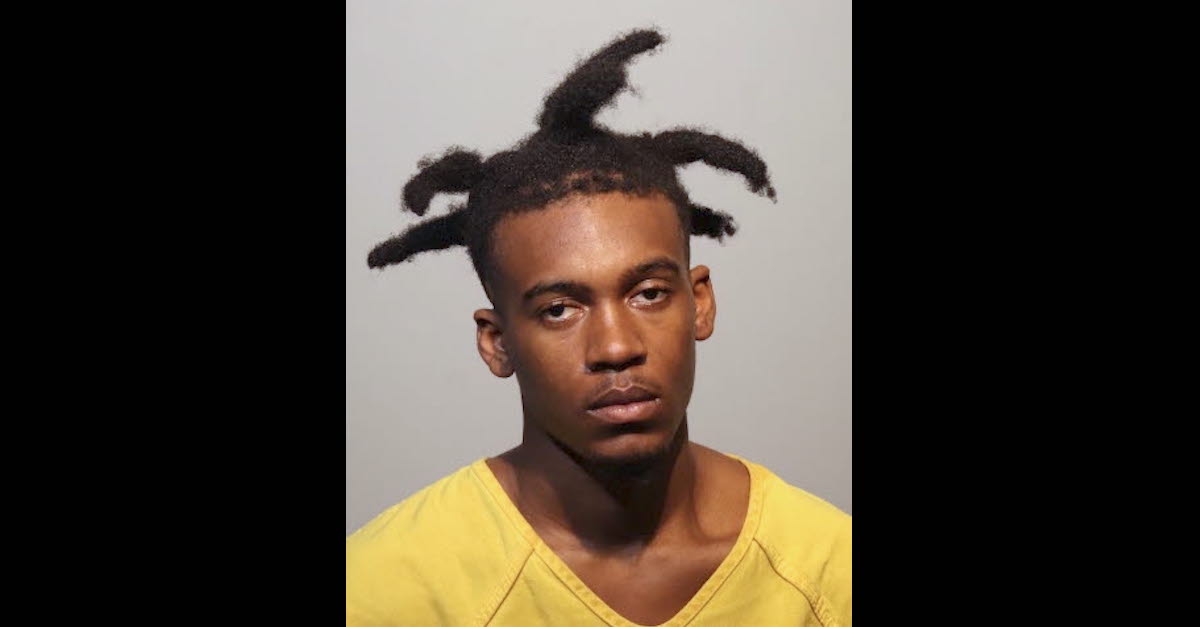 A Florida man has been charged in connection with the shooting of a young mother during a work-related Zoom call.  Shamaya Lynn, 21, died when her own toddler obtained an unsecured handgun, pulled the trigger, and fired, authorities said in August. According to court documents, the gun’s owner, Veondre Avery, 22, kept the weapon in a backpack decorated with animated characters form a children’s show and that his 2-year-old son — the toddler who fired the fatal shot — knew how to use toy guns.

Avery was charged this week with two counts in connection with the shooting: failure to securely store a firearm and manslaughter. According to jail records, he was booked into the Seminole County, Fla. jail on Tuesday and was due in court Wednesday afternoon.

One of the participants in the fateful multi-party Zoom was selected to immediately alert the police to what occurred.

The colleague who telephoned 911 said that a child began “jumping on the bed without a shirt on and looked like he was wearing only a diaper” during the Zoom call. The colleague said that “she heard a loud noise and the child in the background beginning to cry.” The victim’s “head fell backwards and moved forward back into [the view of the] screen.” The college noticed “blood on [Lynn’s] nose” before the victim again moved “back off screen.” No one responded when colleagues called out for help.

Eventually, after several minutes had passed, the colleague told police she heard Avery enter the room and yell. The Zoom call remained active while Avery called 911 himself. The colleague said she tried to call out to Avery but that he apparently couldn’t hear her; the child was the only other person in the room when the gunshot rang out.

Another colleague who was on the Zoom call said the gunshot “sounded like cans falling on the ground,” according to a police report filed in court.

The Zoom call was not recorded, the participants said. According to court records, authorities are attempting to determine whether Zoom maintained a backup recording of the meeting on its own servers. 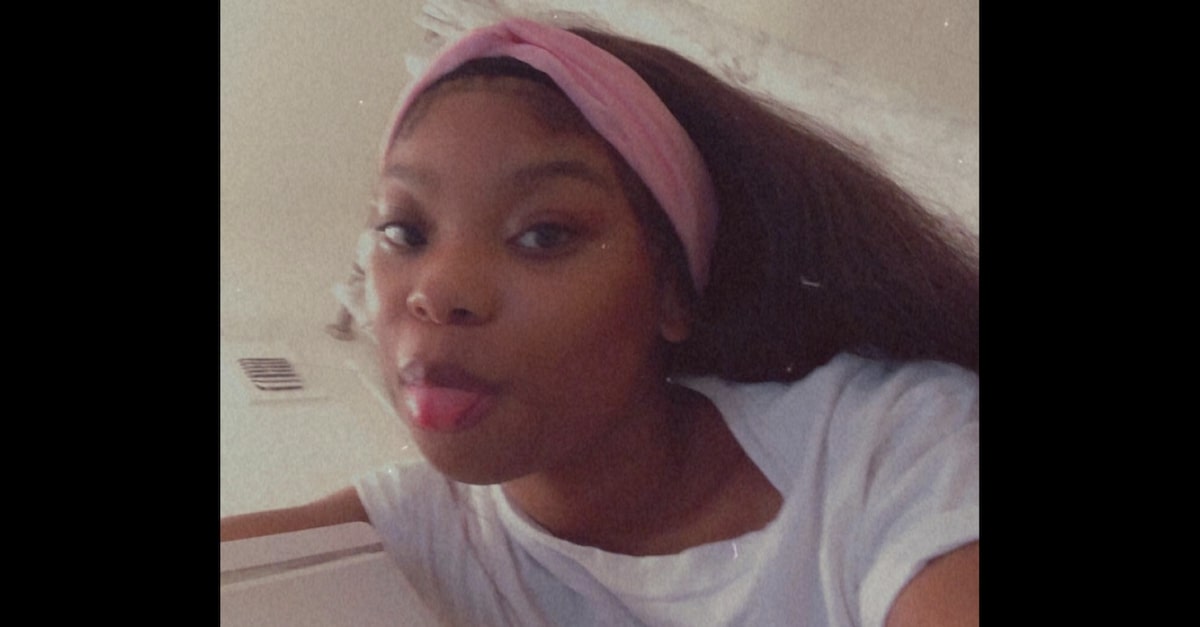 “Veondre Avery did store a loaded firearm in a manner and location which was attractive and easily accessible to children, resulting in a child discharging said firearm, thereby causing the death of Shamaya Lynn, contrary to Section 752.07, Florida Statutes,” a criminal information alleges. It further charges that Avery left the gun out “without the supervision required by law, in a rude, careless, angry, or threatening manner.”

A police report filed in court contains additional factual assertions. It explains that Avery was Lynn’s boyfriend. Avery was performing CPR on Lynn when officers arrived at the couple’s home pursuant to the various 911 calls.

Officers said Lynn was killed in a bedroom she shared with the defendant. Two children lived in the couple’s home: a 2-year-old and an 11-month-old.

“I noticed a bloody handgun on the nightstand and several other firearms in plain view inside the closet,” a responding officer wrote in a report filed in court.

A “visibly upset” defendant told authorities during a subsequent police station interview that “everything was normal” in his relationship with his by-then-deceased girlfriend.

The defendant said he took a Lyft to an appointment with a chiropractor. When he returned home, his 2-year-old “told him that his head hurt.” The defendant said he saw a bump on his son’s head. When he went to ask Lynn how the injury occurred, he saw her “slumped over on her computer chair.” She was “unresponsive” and had an “excessive amount of blood on her head and face,” the police report continued.

The defendant said he called 911 immediately and began CPR as instructed by a dispatcher.

“Veondre said he noticed his personal Glock handgun laying on the bed, on top of the sheets,” the report went on.  “He took the handgun and placed it somewhere on his nightstand away from the children’s reach.  Veondre said he also noticed on the damaged computer screen what looked like a bullet lodged in it.  Veondre said he removed the projectile and handed it to the first responding officer.”

The defendant said he “owns and keeps four firearms in the residence,” the report continued. The defendant said he normally kept the Glock 43 which fired the fatal bullet in a “Paw Patrol backpack next to” his bed. Officers immediately noted that “Paw Patrol” is an “animated children’s show” and that the backpack was decorated with “colorful . . . cartoon images of dogs that would be enticing to a child.”

The loaded Glock was not equipped with a safety lock, the police report alleges. The defendant admitted he kept the gun “ready to fire with one round in the chamber.” Avery further said his 2-year-old boy “plays with toy cap guns and knows how they work,” the police noted. “He also stated that that [his son] likes to pull the trigger on the toy guns,” the police added.

Authorities executed a search warrant and recovered guns, ammunition, the “Paw Patrol” backpack, and an “unknown amount of cannabis” from the residence, court records indicate. The other guns included “[t]wo unlocked and unsecured rifles . . . on the top shelf of the bedroom closet” and an “unlocked and unsecured SCCY handgun . . . on a lower shelf in the closet . . . that could have been accessible if a child climbs up the shelving.”

The police reports indicate that Avery’s story and Lyft receipts all checked out and that there was no way he could have been the one who fired the lethal lead.

Police attempts to interview the 2-year-old triggerperson with a grandparent present were less than successful due to the toddler’s age.

According to court records, Avery is accused of manslaughter by “culpable negligence.” That law generally applies to a defendant’s infliction of injury upon a victim through a general lack of awareness. Under Florida law, if an “actual personal injury” occurs, the crime is a second-degree misdemeanor; if a victim is simply exposed to personal injury, the crime is a third-degree misdemeanor.

However, an additional section of the Sunshine State’s culpable negligence statute applies to cases where minors obtain firearms. That section applies where a defendant stores or leaves “a loaded firearm within the reach or easy access of a minor” who then “obtains the firearm and uses it to inflict injury or death upon himself or herself or any other person.” Such situations are third-degree felonies.

Each of us has a duty to act reasonably toward others. If there is a violation of that duty, without any conscious intention to harm, that violation is negligence. But culpable negligence is more than a failure to use ordinary care for others. In order for negligence to be culpable, it must be gross and flagrant. Culpable negligence is a course of conduct showing reckless disregard for human life, or for the safety of persons exposed to its dangerous effects, or such an entire want of care as to raise a presumption of a conscious indifference to consequences, or which shows wantonness or recklessness, or a grossly careless disregard for the safety and welfare of the public, or shows such an indifference to the rights of others as is equivalent to an intentional violation of such rights.

Read several key documents from the court’s case file below: