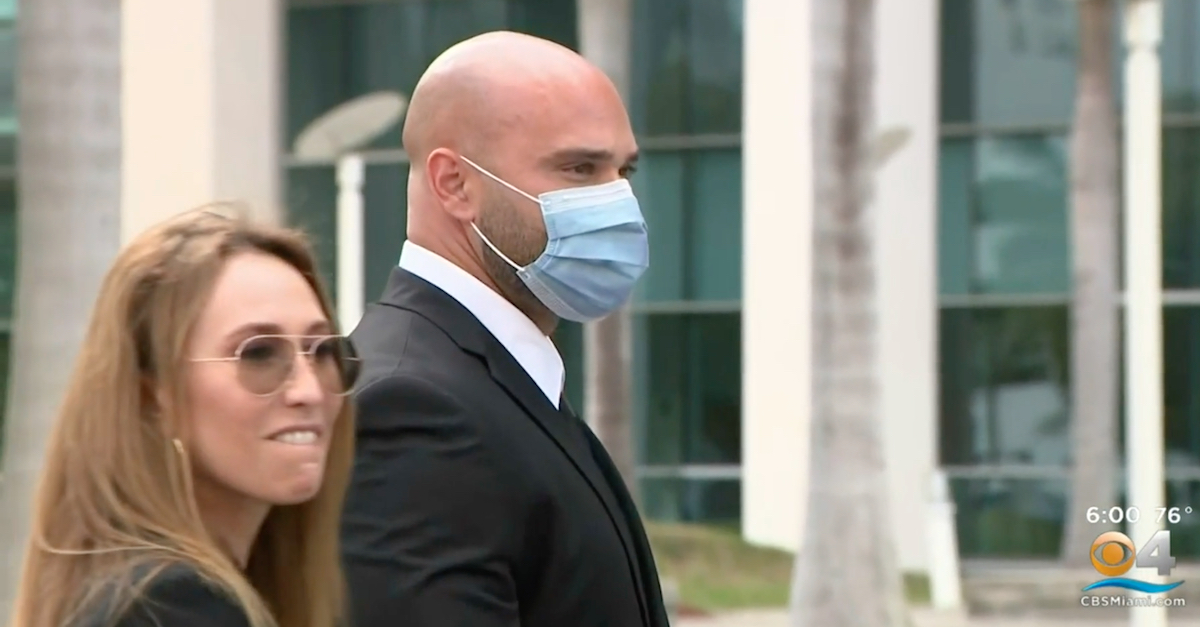 A former Hialeah, Florida police sergeant pleaded guilty Friday to three federal civil rights offenses involving sexual conduct with multiple women, but because the crimes to which he admitted guilt are misdemeanors, he won’t be forced to register as a sex offender, his attorney said outside court.

Jesus Manuel Menocal Jr., 34, “admitted that he kissed a woman and caused her to touch his exposed penis; had a second woman, who was in psychiatric crisis, perform oral sex on him; and coerced a third woman, who was walking alone at night, into submitting to oral and vaginal sex,” the U.S. Department of Justice wrote in a press release. “While not directly related to the offenses to which he pleaded guilty, Menocal also admitted to bringing a fourth female into a Hialeah Police Department building and ordering her to remove her shorts and underwear, causing her to expose her buttocks to him. Menocal admitted that he was on-duty and in uniform during all of these acts, abusing his official authority.”

The DOJ listed Menocal as a Miami resident.

Menocal’s plea bans him from working anywhere in the United States as a police officer ever gain, according to a report from Miami CBS affiliate WFOR.  But it does not mean that Menocal will register as a sex offender.  Jude Faccidomo, Menocal’s attorney, said outside federal court that because the crimes are misdemeanors, not felonies, his client won’t be subject to sex offender registration laws.

Prosecutors originally did charge Menocal with felonies, the defense attorney said, but it appears they dropped those counts down in severity in return for the guilty pleas.

“Jesse made a decision today as a father and as a son to put this case behind him,” Faccidomo said outside court to an assemblage of reporters and television cameras.  “The government prosecuted this case very aggressively and spared no expense. They employed some of their top tactics and skills. They decided to dismiss the felony counts, and Jesse pleaded to misdemeanors. Again, this means he can get on with his life.”

According to federal court records, Menocal was originally indicted on two counts of depriving a person’s rights under the color of law.  Each count involved a separate then-alleged victim, and each count alleged a violation of 18 U.S.C. § 242.  The indictment, dated Dec. 12, 2019, was augmented on May 27, 2020, via a superseding information.  That document alleged another count of the same precise charge involving a third then-alleged victim.

The three victims were not identified in the court record.  Two were said in federal court documents to have resided in in Hialeah, Fla.; the other resided in Homestead, Fla.

The cited statute carries both misdemeanor and felony penalties depending on the severity of the harms perpetrated.

“He is going to go home and be with his family and put this behind him,” the defense attorney continued.  “And to be very clear this will not include sex offender status. That would be unlawful because they are misdemeanors.”

Prosecutors and the top official at the local FBI field office countered with several more stern attestations regarding their activities vis-a-vis the defendant.

“We will not stand by idly when law enforcement officials abuse their power and position to sexually exploit and harm women,” said Assistant Attorney General Kristen Clarke via a press release. “The Civil Rights Division will continue to vigorously investigate and prosecute government officials who use the power of their office to sexually abuse and harm vulnerable people in their communities. We hope that this conviction sends a strong message to survivors of law enforcement sexual misconduct, that their allegations will be investigated and taken seriously.”

“Menocal sexually exploited the very people he swore to protect,” said U.S. Attorney Juan Antonio Gonzalez of the Southern District of Florida. “He betrayed his oath as a police officer and cast a dark shadow over the outstanding work done by the fine law enforcement professionals who serve our communities. Such egregious civil rights violations will not be tolerated.”

“Jesus Menocal is a predator who disgraced the badge he once wore by using his status as a police officer to sexually abuse women,” said John J. Bernard, the Assistant Special Agent in Charge of the FBI’s Miami office. “His actions are depraved and serve only to diminish the hard work and professionalism of the vast majority of South Florida law enforcement officers who follow their oath of office and whose conduct is above reproach.”

Menocal’s sentencing hearing is scheduled for May 12.

“He faces a statutory maximum sentence of three years in prison,” the DOJ said — apparently one year for each charge.

WFOR reported that the defendant was not prosecuted by Florida’s Miami-Dade State’s Attorney’s office because officials there said they did not believe they could prove a case against the defendant beyond a reasonable doubt.

The indictment and the first and second superseding informations are embedded below:

[This report has been updated with additional detail from court records.]