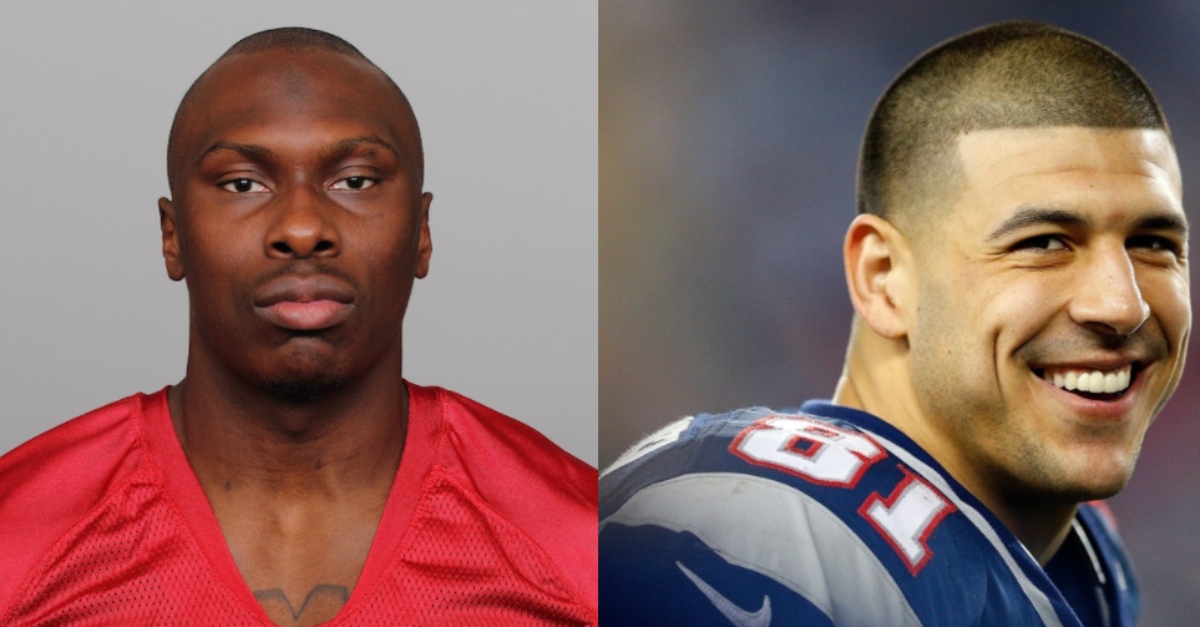 The former NFL player who killed six people at a South Carolina home had a terrible case of chronic traumatic encephalopathy (CTE) for his age, comparable to convicted murderer and former New England Patriots tight end Aaron Hernandez, a doctor said in a law enforcement press conference on Sunday.

Phillip Adams, 32, who also played for the Patriots — as well as teams like the San Francisco 49ers, the Raiders (then of Oakland), and the New York Jets — had stage 2 CTE, which was “unusually severe” in the frontal lobe, Dr. Ann McKee, director of Boston University’s CTE Center said.

Authorities said they did not know why Adams targeted the home of Dr. Robert Lesslie, 70, on April 7, 2021. He killed the doctor, the doctor’s wife Barbara Lesslie, 69, their grandchildren Adah Lesslie, 9, and Noah Lesslie, 5, as well as air conditioning technicians James Lewis and Robert Shook, 38, who were at the residence on a routine maintenance call. Adams had no known connection to the family. Nonetheless, officials suggest that CTE was a major contributing factor to the murders.

Adams was found dead from suicide on April 8 after a standoff with authorities.

“These eight months have been unimaginably difficult,” Lesslie family members Lori Alexander, Amy Kulbox, Robbie Lessie, and Jeff and Katie Lesslie in a statement read by York County Coroner Sabrina Gast. “Even in the midst of crushing heartbreak, we are finding some comfort in the CTE results and the explanation they provide for the irrational behaviors pertaining to this tragedy. We are grateful for those working to continue working to shine a light on anything that can prevent this kind of nightmare from happening to other families. ‘Those who sow with tears will reap with songs of joy. Those who go out weeping, carrying seed to sow, will return with the songs of joy, carrying sheaves with them. Psalm 126:5-6. Thank you for your prayers of support. We continue to grieve as those with hope.”

“Holly Shook and the Shook children continue to grieve the loss of Robert, a devoted husband and beloved father,” the Shook family said in a statement read by Gast. “Holly hopes to find answers that will prevent similar tragic outcomes.”

Adams played football for 21 years, since he was 7, said a statement from the Concussion Legacy Foundation, which participated in the press conference. His experience with the sport definitely caused his CTE, Dr. McKee said. The doctor said Adams had become paranoid, experienced memory problems, and likely had more and more impulsive behaviors.

Adams’s family said he had sought help from the NFL for his deteriorating condition.

“As we process these results, we are deeply saddened by the events that occurred on April 7, and we continue to pray for the families of the victims,” they said in a statement read by Lisa McHale, director of Legacy Family Relations at Concussion Legacy Foundation. “We are pleased to have a better understanding of the mental turmoil that Phillip was dealing with during the last moments of his life. We cannot say that we are surprised by these results. However, it is shocking to hear how severe his condition was. After going through medical records from his football career, we do know that he was desperately seeking help from the NFL but was denied all claims due to his inability to remember things and to handle seemingly simple tasks such as traveling hours away to see doctors and going through extensive evaluations.”

By participating in the research, the family hoped to bring awareness to this condition, so that football players both young and old could understand the risks. They will continue to advocate for any research that can prevent any other family to endure this type of tragedy.

“We want people to understand that this could happen to anyone,” the family said. “Phillip is not the first to battle with this disease, and he will not be the last.”

After the shooting, Adams’s father Alonzo Adams told local NBC affiliate WIS-TV that he believed football “messed up” his son.

Dr. McKee said that CTE is a progressive disease, and that the worst stages–3 and 4–are usually seen in older patients, but Adams had it worse than usual for a stage 2 case. She compared his CTE condition to Aaron Hernandez, who was famously convicted of the 2013 murder of Odin Lloyd but acquitted in a separate trial of the 2012 murders of Safiro Furtado and Daniel de Abreu. Hernandez later died by suicide in his cell.

Red tape stood in the way of Adams getting help, McKee said.

“He tried to get help, but this is a man who is not thinking clearly,” she said. “He’s having problems with planning and organization. He’s the least able to actually get help. There’s huge obstacles for these former players to find help. They have to make many medical appointments. They have to fill out very extensive paperwork, and that is usually beyond the ability of people who are impaired. If they don’t have an advocate that’s recognizing the issues in these individuals, they fall through the cracks, and that, I think, is what happened for Mr. Adams. So I would like a comprehensive care package evaluation system offered by the NFL for these ex-players that would give them the kind of care and management that they deserve.”

[Image of Adams via NFL by way of Getty Images; Hernandez via Jim Rogash/Getty Images]