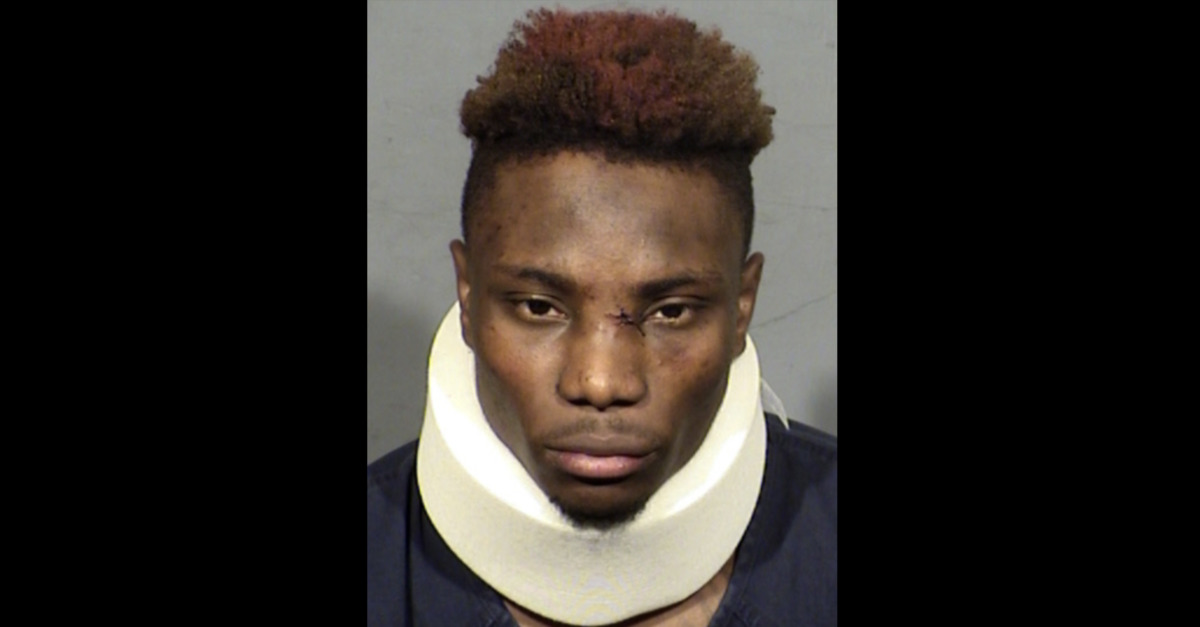 Allegations are now abundant.  They include the death of a pet, the likelihood of forthcoming additional charges.  The matter also tangentially now involves a quote connected to Hunter S. Thompson.

According to Clark County Chief Deputy District Attorney Eric Bauman, the defendant was traveling 156 miles per hour with a blood alcohol level of .161, over two times Nevada’s legal limit, two seconds before the collision with another driver occurred just after 3 a.m.

According to Los Angeles-based CW affiliate KTLA, the prosecutor cited digital airbag records that allegedly showed Ruggs’s Chevrolet Corvette decelerating to 127 miles per hours immediately before striking the Toyota Rav4 driven by the deceased in the horrific crash.

The outlet reports that Justice of the Peace Joe M. Bonaventure remarked he had never before come across speed that high in a car crash case since he came to sit on the bench.

In so musing, however, the judge rejected the state’s $1 million bail request and instead set bail at defense attorney David Chesnoff’s proposed $150,000 with conditions that include home confinement, electronic monitoring, no alcohol consumption, suspension of driving privileges, and the surrender of the defendant’s passport.

According to TMZ Sports, Ruggs refused field sobriety tests at the scene of the crash and was seen during his arraignment with a large, visible gash on his face.

Ruggs was charged DUI resulting in death after receiving treatment for non-life-threatening injuries on Tuesday. He faces a maximum sentence of 20 years in prison — a non-probationary punishment that must be served behind bars, as Law&Crime previously reported.

While authorities were initially mum on any details surrounding the victim, Bauman on Wednesday accused the onetime NFL cornerstone wide receiver of killing a 23-year-old woman and her dog. Additionally, the prosecution said that Rugg’s girlfriend, Kiara “Rudy” Kilgo-Washington, was severely injured in the crash. The state intends to seek an additional DUI charge based on those injuries, Bauman said, according to Las Vegas CBS affiliate KLAS.

According to the Las Vegas Review-Journal’s Katelyn Newberg, a loaded gun was also discovered inside the car driven by Ruggs, prosecutors alleged. The state may seek a firearm charge as well.

The 5-2 Raiders released Ruggs from their roster less than 24 hours after the incident — capping a brief professional football career under the most dire of circumstances. But at least some members of the organization were not content with simply dismissing the once-promising and highly-drafted athlete.

According to The Focus, the Raiders deleted several tweets referencing the phrase “speed kills” in the immediate aftermath of the crash.

The phrase was popularized by Thompson, the co-creator of the gonzo style of journalism (along with Oscar Zeta-Acosta), who himself attributed the phrase to Al Davis, the legendary former owner and general manager of the Oakland Raiders.

“Speed kills,” Davis reportedly said. “You can’t teach speed. Everything else in the game can be taught, but speed is a gift from God.”

Shirts bearing the phrase are now reportedly being pulled from some online retailers.