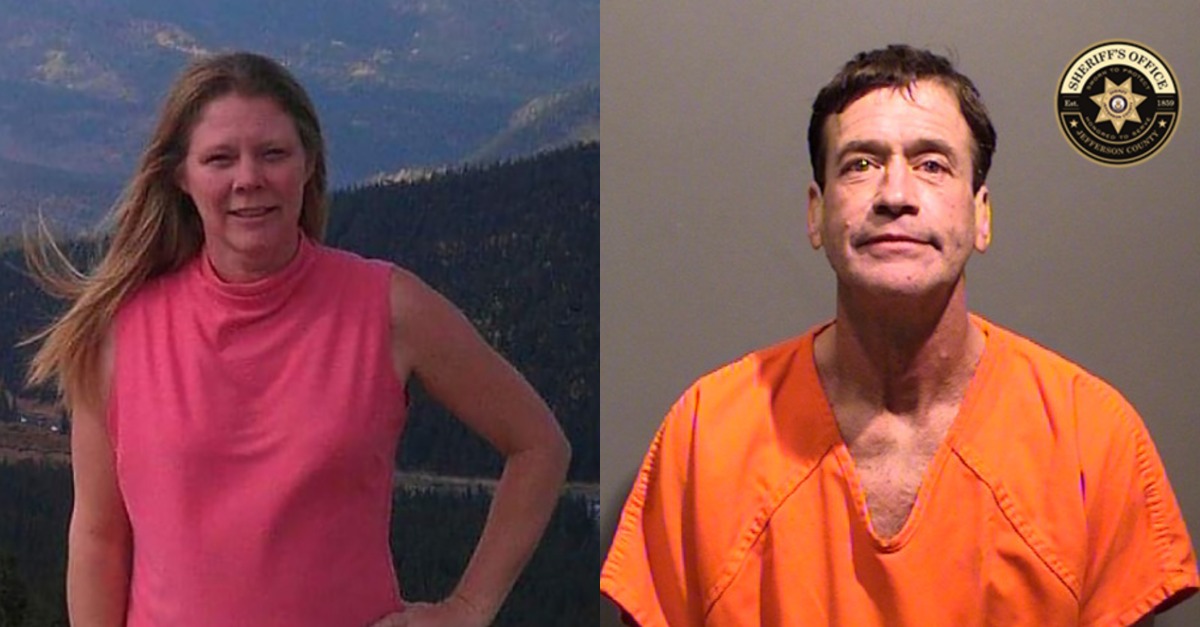 A Colorado man was arrested and charged in connection with the disappearance and death of his ex-girlfriend who recently went missing. He was allegedly found driving the victim’s car on Monday, Valentine’s Day.

Wayne Lotz, 58, now stands accused of numerous charges including murder in the first degree, tampering with evidence, tampering with a deceased human body, aggravated motor vehicle theft, and criminal possession of a financial device, according to a Wednesday press release from the Jefferson County Sheriff’s Office (JCSO).

On Tuesday, Feb. 15, 2022, right around 2:00 p.m., the body of 55-year-old Michele Scott was discovered near the intersection of Pleasant Park Road and High Grade Road in Pleasant Park Corridor, a part of Jefferson County near similarly unincorporated Conifer, Colo.

The way the woman died has yet to be released.

Investigators say they had already determined Lotz to be a person of interest in the murder before the victim’s body was found.

According to the JCSO, deputies were first called to perform a welfare check the Sunday, Feb. 13 evening prior. The request was made by neighbors who were worried since they had not seen Scott “in a couple of days.”

“Deputies found the home locked and dark with no one home,” the sheriff’s office said.

The next day was Valentine’s Day. Those same neighbors contacted Scott’s family, who allowed them to enter the still-darkened home.

“Once inside, neighbors found the dogs had not been cared for, which caused them concern,” the JCSO said. “Deputies arrived back at the house about 8 a.m. and upon entering, found concerning evidence suggesting foul play. The JCSO immediately deployed numerous resources to further search the property and begin a search.”

That search, law enforcement claims, quickly turned up “evidence on her property” that led investigators to believe Lotz, identified by authorities as Scott’s “ex-boyfriend,” as the prime suspect. The sheriff’s office described some of this evidence as “a history of domestic violence calls at that residence involving Michele and Lotz.”

According to the JCSO, the most recent domestic violence call occurred less than a week before law enforcement was made aware of Scott’s disappearance, on Monday, Feb. 7, 2022. But, the sheriff’s office said “[n]o arrests were warranted at that time.”

The day after a Feb. 13 welfare check at Scott’s residence, authorities “surveilled” Lotz “and found [him] to be driving Michele’s vehicle.” The defendant was also allegedly possession of his ex-girlfriend’s debit card. He was arrested, charged with the relatively minor theft and fraud crimes and booked into the Jefferson County Jail just before 2:00 a.m. on Tuesday.

Authorities, however, did not elaborate on this aspect of the investigation and only mentioned that “[f]orensic technology” led them to the location where the victim was found dead.

Law enforcement is now asking for help from the public.

“Residents and businesses in the area are encouraged to look at their security camera footage from the past week for Michele’s red Toyota Highlander,” the JCSO said. “If you have any information on this case, please call our tip line at 303-271-5612. You can remain anonymous.”