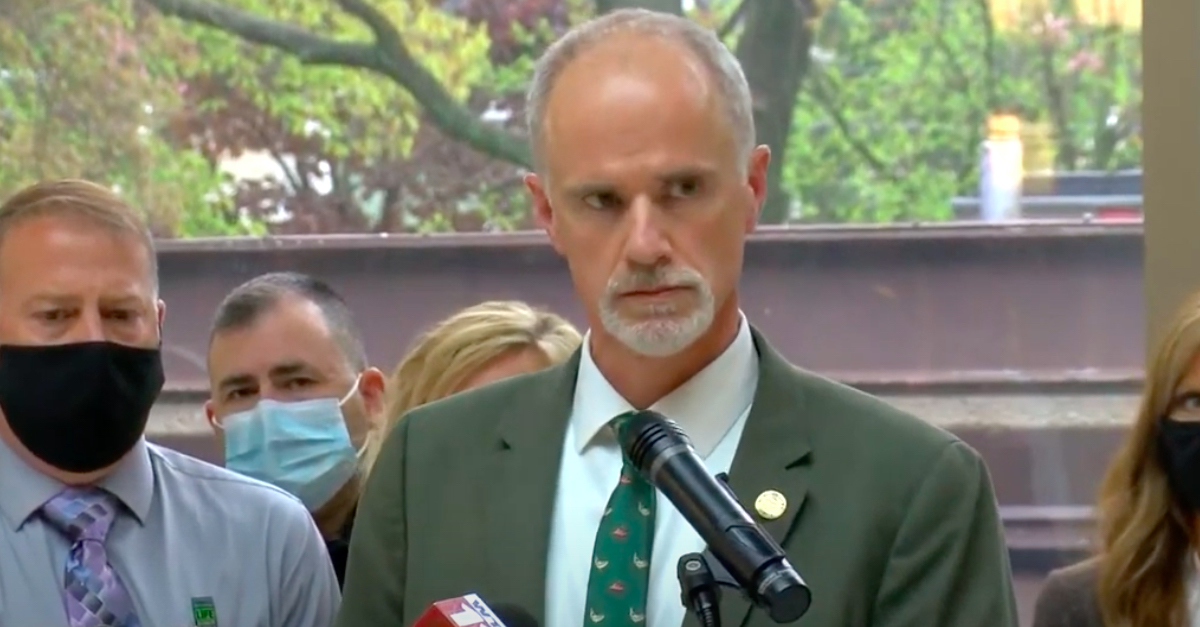 “I’ve often said that this office prosecutes things we would never want to have happen to ourselves — never more so than in this case,” Paul Dodson, the prosecuting attorney from Wood County, Ohio, remarked during a Thursday afternoon press conference.

According to Dodson, the event which led to Foltz’s death was a “new member initiation process” for Pi Kappa Alpha’s Bowling Green chapter in which the new members, also called “little brothers,” were introduced to mentors known as “big brothers.” Prosecutors say that the new members, almost all of whom were under 21, were given a 750 ml bottle of “high alcohol content liquor” and told to finish it by the end of the night.

“The rest of the event surrounded the watching of the littles attempt to do so,” Dodson said. “It is alleged that Stone Foltz consumed all or nearly all of the contents of his bottle and then was taken home by several other members, including his ‘big brother,’ 20-year-old Jacob Krinn.”

Prosecutors allege that Krinn, of Delaware, Ohio, and the others left Foltz in his apartment, where his roommate and friends discovered him and called 911. When emergency medical assistance arrived, Stoltz’s roommate was in the process of performing CPR, prosecutors say.

Authorities say an emergency vehicle took Stoltz to Wood County Hospital. He was later transferred to Toledo Hospital, where he died on March 7.

Rex Elliot, an attorney for the Foltz family, told Toledo ABC affilaite WTVG last month that Stone Foltz had a blood alcohol content (BAC) of 0.394 — nearly five times the legal limit — on the night he was brought to Wood County Hospital. Elliot also told the outlet that he believed Foltz’s BAC would have been much higher had it been measured earlier in the evening.

Under Ohio law, the elements of first-degree involuntary manslaughter include showing that a defendant unintentionally caused the death of another person in the commission or attempted commission of a felony. It is punishable by a maximum of 11 years in prison.

Here is a breakdown of the other charges connected to Foltz’s death:

Benjamin Boyers,21, of Sylvania, Ohio, was charged with Hazing and Failure to Comply with Underage Alcohol Laws.

“We are grateful for all of the hard work conducted by local law enforcement and the prosecutor’s office, and we are confident they will make sure justice is served. However, today is just one step in the right direction. Swift action also needs to be taken by government officials and university presidents nationwide to abolish fraternity hazing,” the family said in a statement issued through attorneys. “We are living every parent’s worst nightmare and will not be at peace until fraternity hazing is seen for what it truly is — abuse. It’s unacceptable, and in Stone’s case, it was fatal. How many injuries and deaths will it take for people in positions of power to do the right thing? We demand zero tolerance. Anything less will result in additional innocent lives lost and parents like us pleading for change.”