‘Don’t Ruin This for Me’: Teen Accused of Shooting Former Girlfriend 22 Times Allegedly Begged Her Not to Tell Other Girl About Relationship 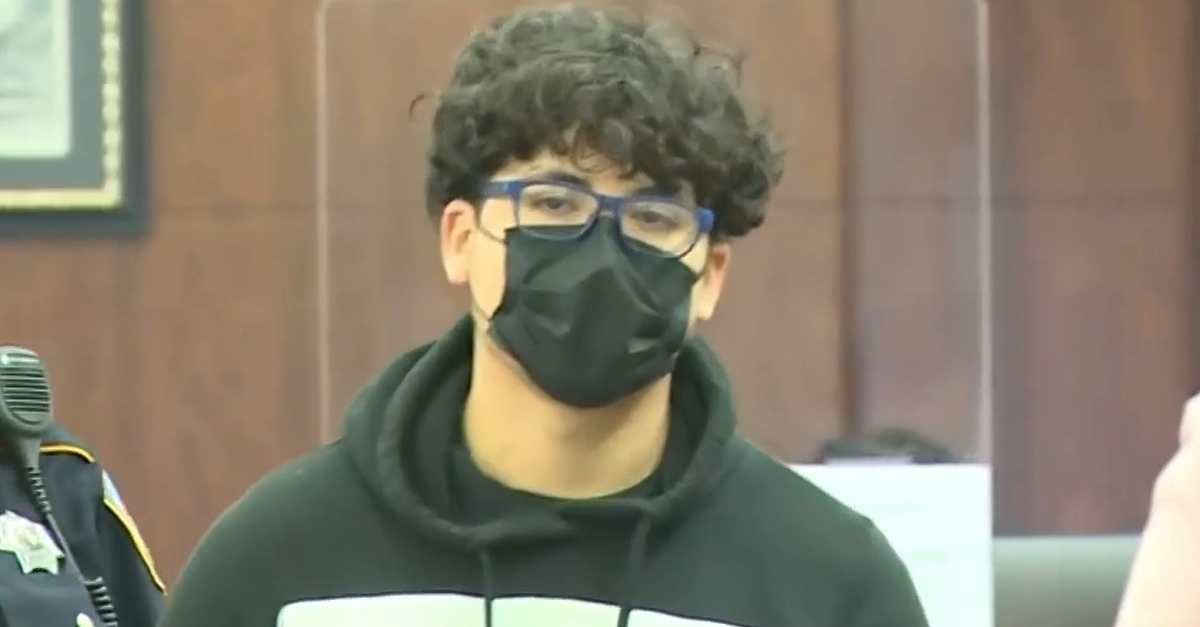 Prosecutors outlined their case against a teenage boy who allegedly shot his 16-year-old ex-girlfriend 22 times. The victim sustained at least some of the shots when she was on her back.

Frank Deleon Jr., 17, previously put a gun to Diamond Alvarez’s head at some point in their 6-month relationship, prosecutors said in court according to KPRC. He did the same to another girl he was dating, authorities said. Family said Deleon and Alvarez had a text exchange on Jan. 9, two days before the murder, in which he begged her not to tell another girl about their own relationship.

“Don’t ruin this for me,” he allegedly texted multiple times.

The court hearing on Wednesday elaborates on previously reported details, in which Deleon shot Alvarez 22 times while she was out walking the family dog Peanut in Houston, Texas. According to family, Diamond had learned he was in a relationship with another girl.

In the account from the family, the former couple agreed to meet in a park the night of the murder. Alvarez’s sister told her not to meet him.

“We came to the field,” Diamond Alvarez said, according to prosecutors on Wednesday. “I told him, I would only talk to him in the field.”

Family said they heard gunshots. Her mother Anna Machado tried calling her to no avail, and they found Peanut alone. They discovered Diamond Alvarez in the field. She was dying.

“My son found her,” mother Anna Machado told KTBC. “I tried CPR, and I couldn’t bring her back. I tried so hard to keep her alive. I couldn’t.”

There were 10 shell casings near her body, and most of the wounds were consistent with her being on her back when struck, prosecutors reportedly said on Wednesday.

This Houston teen, dancing happily with her mother, was shot & killed last night while walking her dog. Sadly, Diamond Alvarez’s mom performed CPR to try to save her but couldn’t. Can you help find this 15 year old’s killer? More information on KHOU 11 News tonight at 10. #khou11 pic.twitter.com/hJHpmqoJtN

Two witnesses saw someone matching Deleon’s description in the area after the murder, prosecutors said.

Officers found him with a packed suitcase when they arrested him, the state said, highlighting this as evidence he was planning to flee.

Deleon downplayed the nature of the relationship with Alvarez in court. They were “kind of seeing each other,” he said. Deleon alleged that she was stalking him. Contrary to the text message evidence, he claimed not to have spoken with her since Jan. 8. Prosecutors claimed he had a 9mm gun, but he said he got rid of it before the New Year.

NEW: 17yo Frank DeLeon just showed up for his first official court appearance, surrounded by family. He’s charged w/ murder — accused of shooting & killing 16yo Diamond Alvarez 22x at a park in SW #Houston. Police say he was in a love triangle w/ Alvarez & another female. @KHOU pic.twitter.com/MnyoE2Ngqf

Deleon did not address reporters asking him questions outside his court hearing. His attorney of record did not immediately respond to a Law&Crime request for comment.

The judge followed the prosecution’s request for a $250,000 bond, ordering Deleon to submit to house arrest with an ankle monitor, according to KPRC.