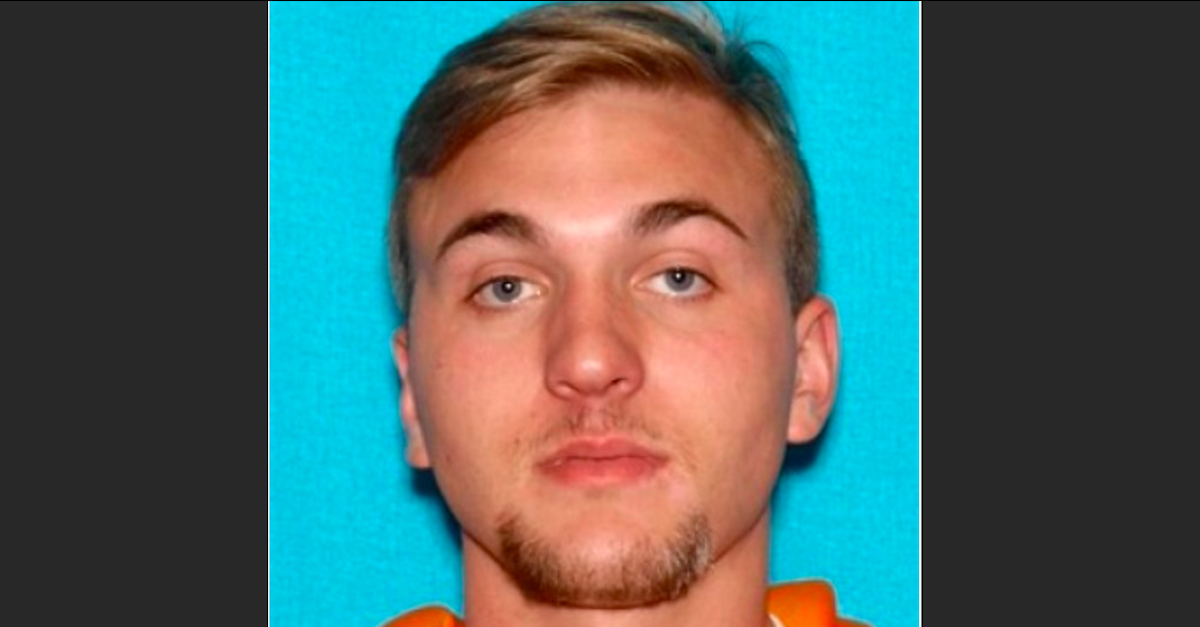 Samuel Earl Rich, courtesy of the Tennessee Bureau of Investigation

Following a multi-day manhunt, law enforcement authorities in Tennessee captured a man wanted in connection with the fatal shooting of the nephew of a member of the state House of Representatives, the Tennessee Bureau of Investigation (TBI) said Sunday.

My heart 💔 is broken after seeing this. The mother “Will” James William Warner, the Shelbyville man murdered in West Nashville, sent us this photo of her son’s dog lying atop his grave after his burial. @WKRN pic.twitter.com/JcHcueI0n3

Agents with the TBI and deputies with the Bedford County Sheriff’s Office on Sunday evening announced that Samuel Earl Rich, 25, had been taken into custody in connection with the fatal shooting of 22-year-old James William Warner in West Nashville. Warner, the nephew of Tennessee State Rep. Todd Warner (R), was discovered Friday morning by a Metro Utilities Systems water crew.

Rep. Warner represents the counties of Marshall, Franklin, Lincoln, and Marion. According to the Tennessean, Rep. Warner said his nephew was a “typical country boy” who “loved life and loved people.”

“It’s just a tragic ending to something that should’ve never happened,” he said.

DA General Robert Carter confirms Samuel Rich is the son of Bedford County Judge Charles Rich. The TBI says Rich surrendered to the sheriff’s office without incident. He is being held without bond. Metro police tell me their investigation continues @WKRN https://t.co/JubDn9a9vC pic.twitter.com/6JJrYFBMaj

According to a report from local CBS/ABC-affiliate news station WJHL-TV, investigators believe that Rich drove Warner to the area located at the end 35th Avenue North and shot him to death and then left his body to be found in the street.

“Will was larger than life and never met a stranger,” the victim’s mother, Christy West Warner, told the station. She also said that she was thankful for the “the kind comments and prayers” from other members of the community.

The sheriff’s office said that the 6’0″, 165-pound Rich surrendered himself to deputies Sunday evening.

While he was wanted in connection with Warner’s murder, Rich initially landed on the state’s Most Wanted list after authorities said he allegedly attempted to murder Warner’s girlfriend.

A report from The Shelbyville Times-Gazette stated that authorities believe Rich shot the woman in the head early Friday morning at a home on Temple Ford Road. Her name was not released to the public, but authorities said she was airlifted to Vanderbilt University Medical Center where she was being treated with serious injuries.

The Times-Gazette further reported that a vehicle owned by Warner or his girlfriend was stolen and found on Smith Chapel Road in the Raus area on Friday, which led authorities to believe Rich may have been nearby. However, a subsequent manhunt was not immediately successful in locating him. That changed days later.

Rich now faces charges of attempted murder and theft in relation to the shooting of Warner’s girlfriend, according to a statement from the Metropolitan Nashville Police Department. He had not been charged in Warner’s murder as of Monday morning.

The TBI, Bedford County Sheriff’s Office, and Metro Nashville Police Department did not immediately respond to emails from Law&Crime seeking additional information in the case.

According to state records, Rich was convicted of a drug offense in 2018 and sentenced to a three-year combination of incarceration and probation.

Editor’s note: this story was update post-publication with the reported detail that the suspect is the son of a county judge.