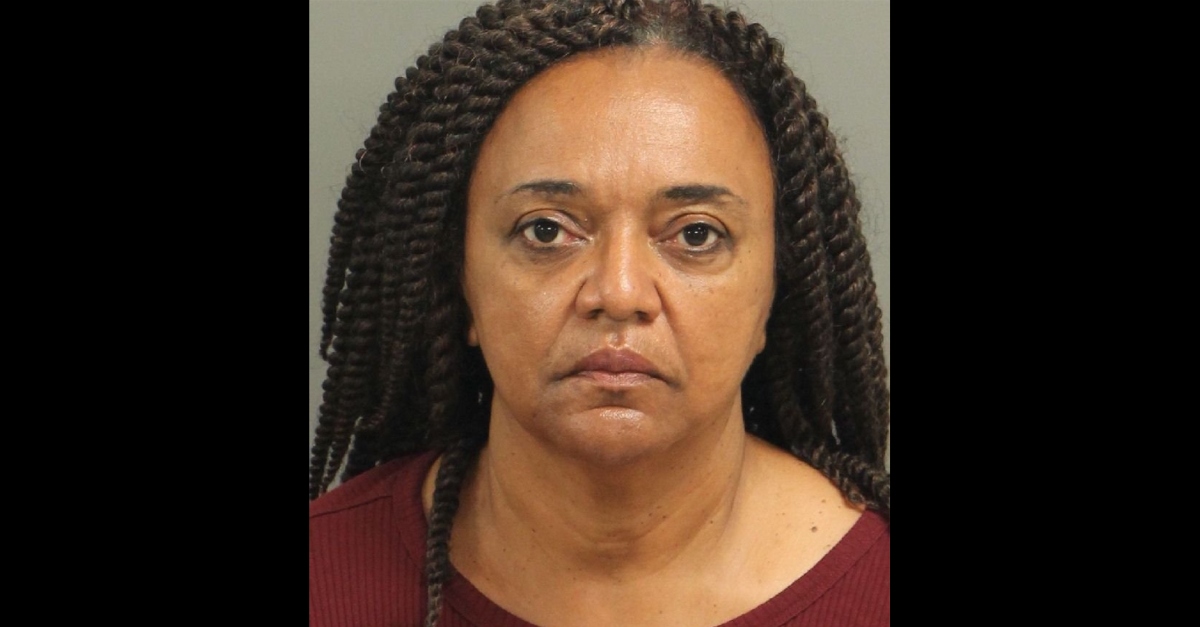 A close relationship ended in bloodshed on Halloween night, say police in the Tar Heel State. Peggy Sylvania Yarborough, 59, murdered her ex-boyfriend Delquan Douglas, 32, at their home Sunday, according to cops in Garner, North Carolina.

It was the suspect who called 911 at 9:15 p.m., reporting that she had shot Douglas, Garner Police Capt. Mike McIver told Law&Crime on the phone. The pair used to date and had recently broken up, but they were still living together, McIver said.

After further investigation, Yarborough was charged with murder, the police captain said.

This incident followed a domestic call less than an hour before at 8:29 p.m., McIver said. A family member called 911, saying there was a dispute. Cops spoke to both parties, and the former couple agreed to physically separate.

According to the call for service report obtained by Law&Crime, Douglas wanted Yarborough out of the house, but police said she would have to be evicted for that to be the case. In this initial call, police said Yarborough said she had a gun and would use it if she believed herself to be threatened.

“I told her that she was legally allowed to own a gun and use it if the circumstances deemed it necessary,” a responding officer wrote.

Police said they last spoke to Yarborough after she pulled into the driveway. She allegedly said she was going inside the residence. Police recommended she keep her distance from Douglas, according to documents. She allegedly said that she would. Douglas did not answer the door when a police sergeant rang the doorbell, they said. From the service report:

Yarborough was gone when we arrived. We spoke to Douglas and he said that they had a verbal argument and Yarborough left. He said that the house was his and she has been living there and he wanted her to not return. I told him that since it was her residence, she would need to be evicted. He asked if we could call Yarborough and ask her to stay somewhere else for the night, we said that we would, but could not guarantee that she would not return. I called Yarborough to confirm that there was no physical altercation, she said that there was not. She then went on to say that she did have a gun and would use it if she felt threatened. I told her that she was legally allowed to own a gun and use it if the circumstances deemed it necessary. I asked her if she had somewhere else to stay for the night and she said that she did and was [to] going back. I then ended the call. As I was leaving the area Yarborough pulled into the driveway of the residence. We got out with her and she said that she was going inside. She was advised that it would be best if she stayed away from Douglas and she sad that she would. Sgt Roberson rang the doorbell to speak to Douglas and let him know that Yarborough was coming in, but he did not answer. We then left.

“I can’t tell you what she was thinking,” McIver told Law&Crime regarding the suspect telling police she had a gun. He said that in North Carolina, people are allowed to have handguns and to defend themselves if the opportunity presented itself.

But in this case, police believe this was a murder. McIver said that officers were not releasing a motive for the shooting at this time. He told Law&Crime that he could not go into specifics of the murder, but he generally cited interviews, physical evidence, and consultation with the district attorney’s office.