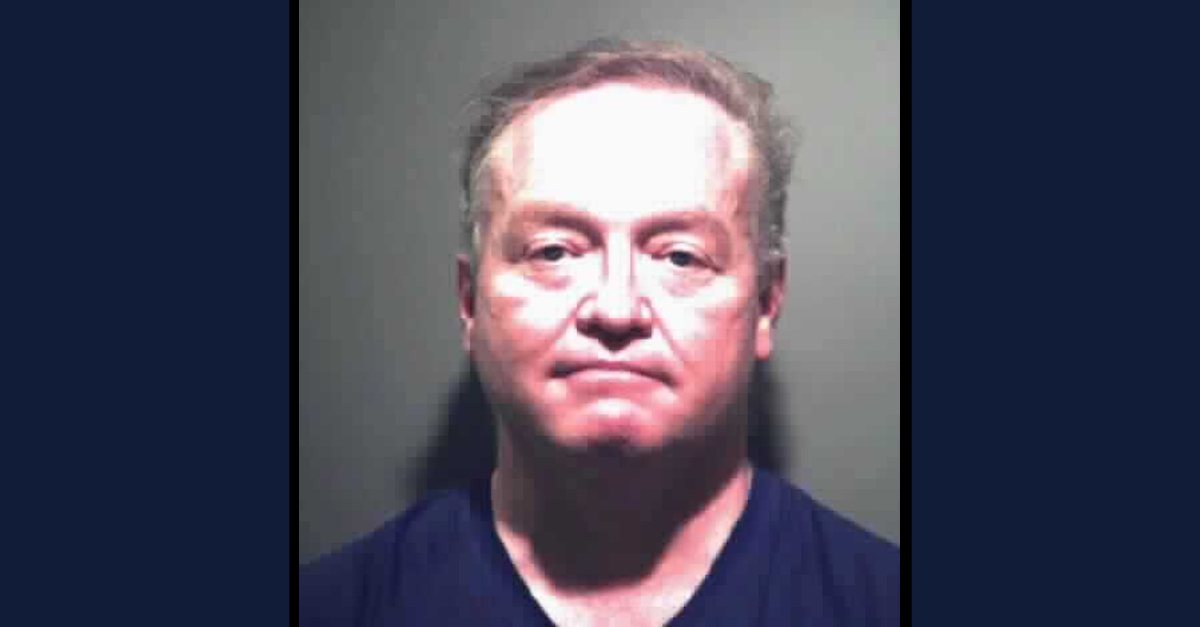 A 48-year-old Maryland oral surgeon is charged with second-degree murder after his 25-year-old girlfriend — who was also a former patient and an employee — died from a drug overdose, the Montgomery County Department of Police announced Tuesday.

According to online court records, Dr. James Michael Ryan is also charged with one count of reckless endangerment, three counts of possessing a controlled substance with the intent to distribute, three counts of distributing a controlled substance, and two counts connected to the alleged provision of drug-related equipment or paraphernalia in the death of Sarah Jane Harris.

Dr. Ryan faces 10 counts in total. He was the “owner and sole practitioner” of Evolution Oral Surgery on Observation Drive in Germantown, Md., according to court papers obtained Wednesday morning by Law&Crime. Those same court documents say the victim’s sister was also employed as Dr. Ryan’s “practice manager.”

In a press release, the authorities said the case unfolded when first responders rushed to the 13900 block of Godwit Street in Clarksburg for a report of an overdose.  The address to which the authorities responded is listed in court paperwork as Dr. Ryan’s residence.

According to court documents, Dr. Ryan said he went to bed at 10:30 p.m. on Jan. 25, 2020. He said the alleged victim was “okay when he went to bed,” However, when he went back downstairs on Jan. 26, 2022, the defendant told the police he found Harris “unresponsive on the couch with used hypodermic needles and various vials of controlled dangerous substances bottles nearby,” the court paperwork indicates.

Despite lifesaving measures from Montgomery County Fire Rescue, Harris was pronounced dead on the scene, the press release stated.

At a concomitant Tuesday afternoon press conference, Montgomery County Police Chief Marcus G. Jones revealed that Harris appears to have met Dr. Ryan when she went to his office for a medical procedure in the fall of 2020.  During the procedure, Harris shared that she had experience working in a dental office. The chief said Dr. Ryan later contacted Harris about a job at his office; Harris accepted the offer and began working for the doctor who now stands charged with murdering her.

In January 2021, Harris and Dr. Ryan began dating, the chief said.  Harris began spending “significant time” at Ryan’s home and began living their permanently in the summer of 2021, the chief continued.

“Family members noticed that Harris’s physical appearance was changing over time and that she did not look healthy,” the chief said.  At various times over the ensuing months, people who knew Harris found her among medicine bottles, syringes, and bloody clothes, the chief told a gathered throng of reporters.  “In at least one instance, she was discovered in an altered state and had arms covered in needle marks and bruises,” the chief added.

Here’s how the authorities described the situation — and the drugs involved — in the press release issued along with the press conference:

Harris, a former patient of 48-year-old Ryan, began working in Ryan’s practice as a surgical technician in October of 2020. They began a romantic relationship around January of 2021, while she worked at Ryan’s practice. The two lived together in Ryan’s Clarksburg home. The relationship between the two continued until her fatal overdose on January 26, 2022. Ryan had been providing controlled substances, including Propofol, Ketamine, Diazepam, and midazolam, to Harris.

Chief Jones said an autopsy revealed that Harris died from Ketamine and Diazepam intoxication. Various vials of the aforementioned drugs, hypodermic needles, syringes, and tourniquets were also found in the home, the chief continued. He indicated later that those drugs are normally found in “clinical medical settings” and would not generally be dispensed through a pharmacy.

According to text messages cited by Chief Jones, Harris asked Dr. Ryan to provide her with drugs from his medical practice; Dr. Ryan also allegedly told Harris her how to use the drugs he provided.  The alleged victim and the defendant also discussed ways to make the effects of the drugs “more potent,” the chief said. Ryan even brought Harris medical supplies, including “IV poles . . . to aid in the administration of drugs or in the recovery from the effects,” the chief alleged. 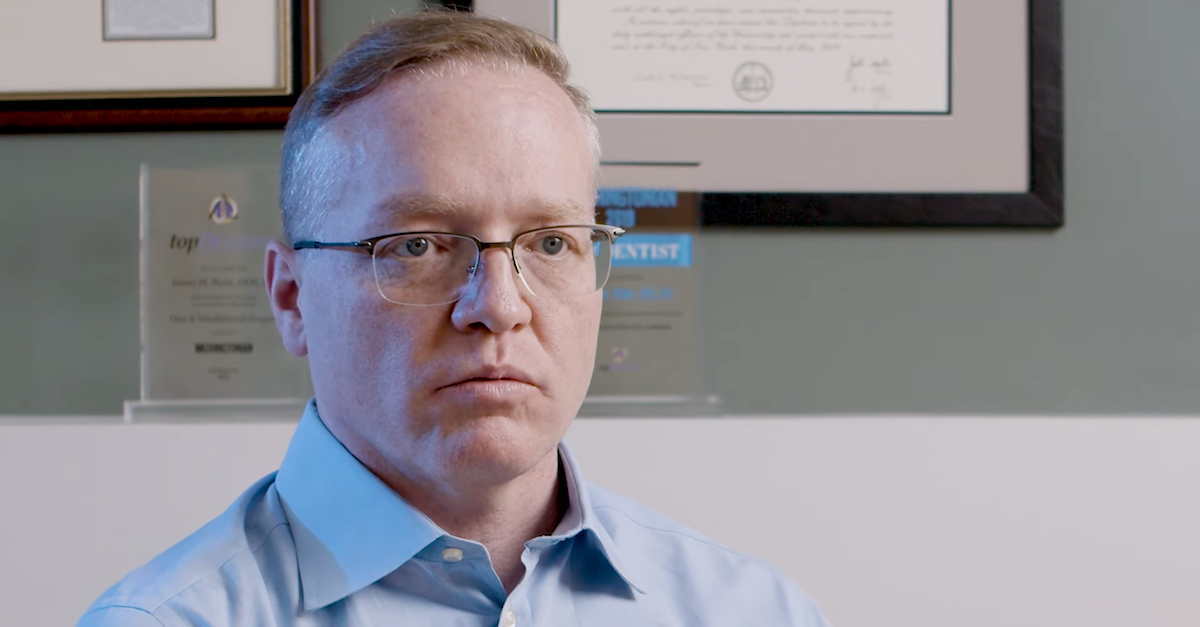 Dr. James Ryan appears in a YouTube screengrab from a video posted online by Evolution Oral Surgery and embedded within the organization’s website.

Court paperwork indicates that it was the alleged victim’s sister who accessed Harris’s social media accounts and saved the alleged conversations between Harris and Dr. Ryan. Some, but not all, of the alleged messages are reproduced in the court documents embedded at the bottom of this report.

“It should be noted that in several other conversations after Sarah Harris tells Stew [her ‘best friend and ex-boyfriend’] that she overdosed, there are test [sic] message exchanges that show Ryan continued to provide Harris with Ketamine, Propofol, Diazepam and Xanax,” charging documents indicate.

The records also state that the alleged victim’s sister linked the medications she saw her sister using in December with Dr. Ryan’s office.

“Because [the sister] was the practice manager at Ryan’s medical practice, she recognized the bottles in the residence that Sarah was using as consistent with what Ryan stocked and used at his practice,” the court documents indicate.

The documents also suggest that employees at the practice believed something was amiss.

“Employees at the practice complained to [the sister] that they suspected Dr. James Ryan was abusing substances at work,” the charging documents allege.  “The employees relayed one event where they located Ryan asleep in his office, but they were unable to wake him.  Eventually, they used ammonia smelling salts to wake him up.”

Harris may have overdosed on an earlier date in December 2021 and accordingly required CPR to be resuscitated, the chief added at Tuesday’s press conference.  At one point, Ryan is alleged to have injected Harris with drugs while she was asleep, the chief continued.

Montgomery County State’s Attorney John McCarthy said the most serious charge filed against Dr. Ryan — second-degree murder — carried a maximum penalty of 40 years in prison.  The total possible incarceration period when all the charges are added up is 78 years in prison, McCarthy noted.

The chief indicated that Ryan has a Drug Enforcement Administration license which “allows him to have access” to some of the drugs he possessed — but the chief alleged that some of the drugs possessed by the defendant “have no so-called ‘medical use’ in the world of oral surgery.”  Later, the chief said the drugs were of the types mostly used for “sedation” and not for “pain” management.

The chief said there were no indications from those who knew the victim that the victim was suicidal.

The authorities said via press release that the case is “active and ongoing” but that they obtained enough information to arrest Ryan after an “extensive investigation.”  The defendant is being held in the Montgomery County Central Processing Unit without bond.

The chief said he feared that there may be other “patients” or “friends” to whom he also provided drugs. 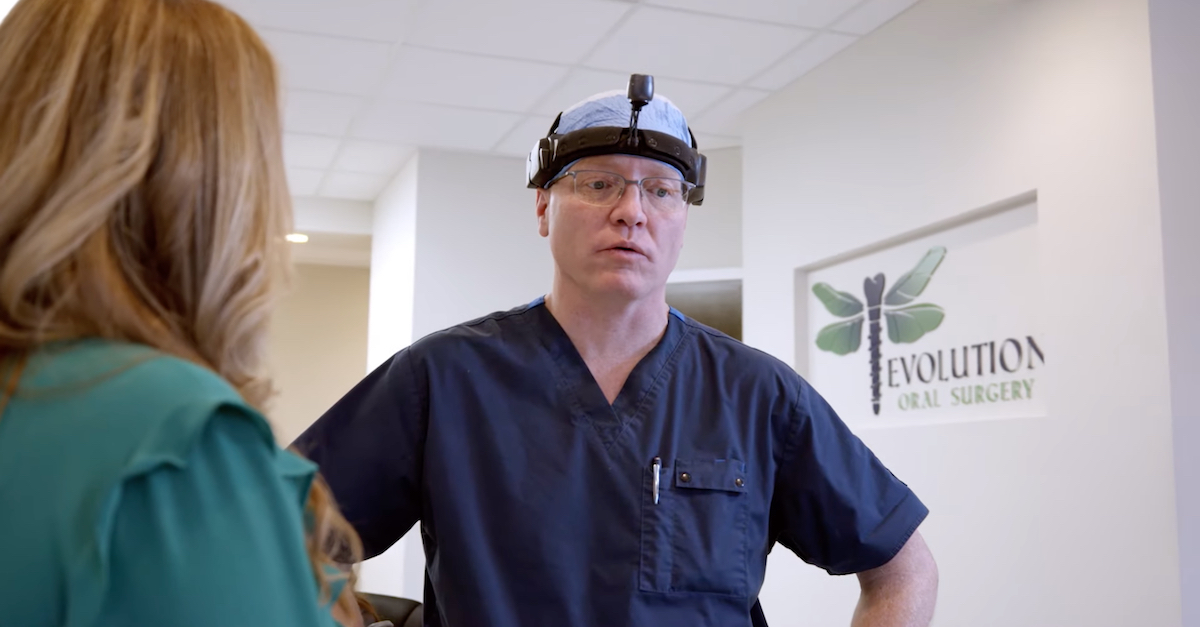 Dr. James Ryan appears in a YouTube screengrab from a video posted online by Evolution Oral Surgery and embedded within the organization’s website.

According to an online obituary, the alleged victim “had a passion for learning, drawing, and spending time with her puppy Winston.”

“She loved photography, traveling, meeting new people, exploring God’s creations, animals, laughing with her sisters, and most of all creating precious memories with her family,” it said in part.  “She had a personality that would light up a room and she carried a radiant smile along with it. She marched to the beat of her own drum and was like no other. She loved fiercely and passionately, feeling incredibly blessed each day of her life. ”

According to online jail records, Ryan is due in court on the afternoon of Wed., March 23, 2022 and again on the morning of April 15, 2022.  The case is proceeding in Montgomery County District Court in Rockville.

Read the court records below: