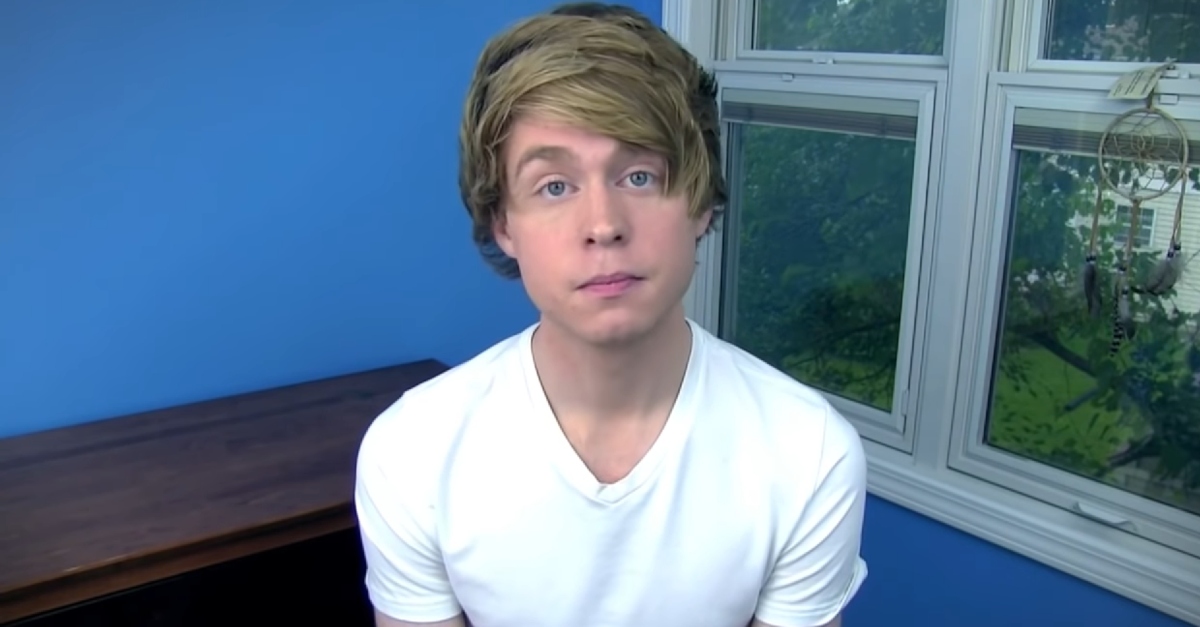 Austin Jones, a YouTuber formerly known for his music, was sentenced Friday to 10 years in prison on a child pornography charge. He pleaded guilty in February, and admitted to getting six minors to send him illicit videos of themselves. On top of that, he badgered girls for sexual videos and pictures on about 30 other occasions even though he knew they were underage.

BREAKING: Austin Jones sentenced to 10 years in prison with 8 years of supervised release.

Jones was of some renown, but YouTube nixed his channel after the guilty plea. Prosecutors described six girls in the plea agreement. The M.O. is pretty consistent across each case. The defendant would usually reach out to individual targets on Facebook via private messaging, tell them to make a video of themselves “dancing in a sexual manner and performing sexual acts,” and telling them what to do and say. In fact, he told most of them to identify themselves by age, prosecutors said. Each girl was 14 or 15 years old.

As part of the plea agreement, Jones admitted to instructing a girl identified as Victim A to keep dancing when she said she wanted to stop:

Victim A expressed that she was tired and might “pass out” and did not want to continue, and JONES instructed her to keep dancing, keep sending him videos, and to “talk about your age the whole time” and to “say these lines: I’m only (age), yeah only (age) years old, this ass is only (age) years old.”

Prosecutors said that Jones explicitly abused his celebrity, telling “Victim B” to send him videos so she could “keep proving that your [sic] my biggest fan.” The defendant was arrested in 2017.

His lawyers argued in mitigation that his now-dead father sexually abused him as a child.

“There can be no question that the systematic devastation of Mr. Jones’ psyche at the hands of his father at such an impressionable age helped create the conditions in which Mr. Jones acted in the manner that he did,” wrote attorneys Terrence LeFevour and David Gaeger, in a filing obtained by The Chicago Tribune. They argued that the challenges from this experience infused his musical work.

Prosecutors accepted the abuse allegation, but they said it’s no excuse. He hurt other victims even though he had “a unique appreciation” for the pain he caused, they said in a filing. They said he manipulated the girls’ by using their personal issues against them.

Judge Lee has called a recess. For the last 90 min or so, several of Jones’ victims & members of their families have given some sobering statements. Several have hurt themselves or attempted suicide. Some forgive him, others haven’t. Jones has broken down crying at least 4 times.

“I placed a burden on you that you never asked for and never deserved,” Jones said in court. “My actions undervalued you as a human being and I’m so regretful I made you feel that way. That is not your value as a person. You are worth so much more and I hope you know that.”

Jones had asked the judge if he could turn around, and look at the girls who were in court while giving his statement, according to Chicago Sun-Times reporter Sam Charles. Assistant U.S. Attorney Katherine Welsh discussed this with them, and said they wanted Jones to only look at the judge.