The Washington, D.C. Metropolitan Police Department has released video of what it calls a “reckless driving incident” by officers on April 22, 2021.

At about 5:15 p.m., in the 1400 block of Anacostia Avenue NE, officers drag raced one another down the street and wrecked their squad cars. They also took out a neighbor’s fence in the process.

Local Fox affiliate WTTG-TV obtained an internal police email which described some of what happened (ellipses in original):

Yesterday two 6D scout cars were totaled because officers decided instead of fighting crime, patrolling their beats, or engaging the community – they decided to drag race each other on Anacostia Avenue at 5 pm in the evening. This is the same area in which over the last week, I’ve had a homicide and two people shot as a result of neighborhood conflict. What does this say to all of the members of the MPD who are passionate about their job and work hard every day to make a difference. This is not fair to any of us . . . but then as I’m talking to Chief Contee about this incident he tells me that a citizen witnessed a white van carrying officers to the scene of the shooting on 37th Place last night traveling at least 90 mph to get to the scene.

What good are officers to their fellow officers if they don’t arrive safely or they total vehicles that we need to do our job . . .

I’m holding each of you responsible for having in-depth discussion about speeding and driving reckless in Department owned vehicles. These are not our cars and we are all liable for driving them with negligence but most importantly, we are all impacted by the actions of each other. Make sure you are engaging with the officers about their speed and the liability of this job.

WTTG reported that four officers were involved. Neighbors sent the station video of the aftermath. 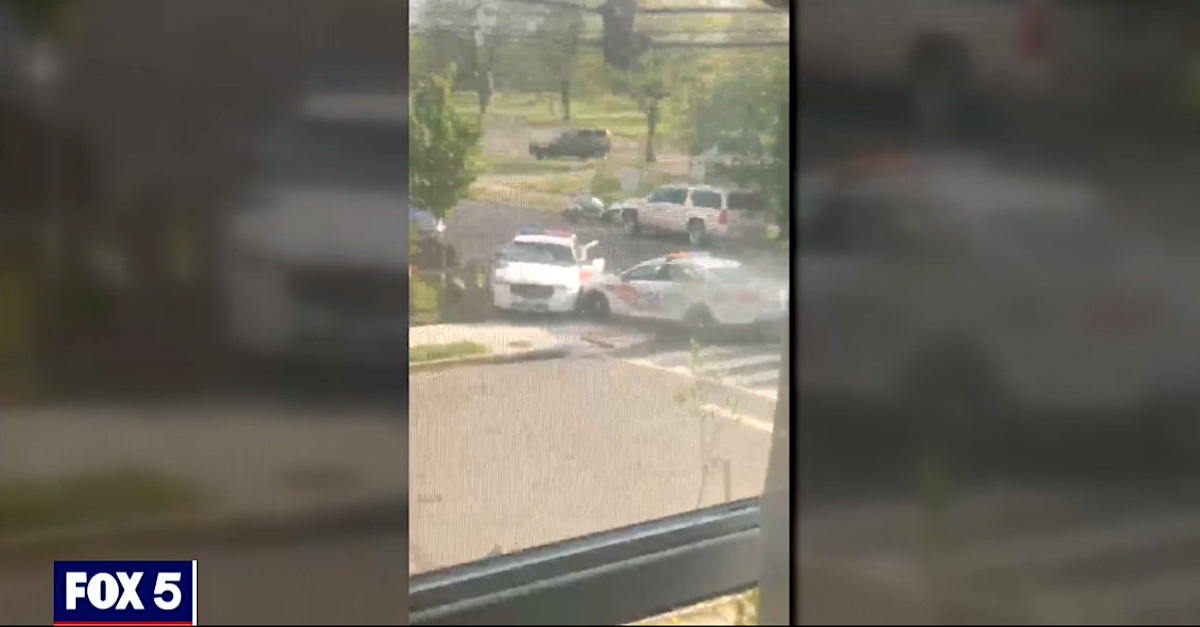 A screengrab from WTTG-TV shows the aftermath of the crash.

The police department released an “unlisted” video on YouTube which shows the crash.  Though the video was uploaded April 30, it was not widely disseminated until Tuesday.

Several graphics which proceed the video describe it what occurred as a “reckless driving incident” which resulted in “major damage” but only “minor injuries.”  They say an attorney general’s review of the situation will be followed by a subsequent internal affairs review. One probationary police department employee has already been terminated. The remaining officers involved are said to be in a “non-contact status” with the public.

“Officers found to have engaged in misconduct will be subject to discipline, up to and including termination,” the graphics continue.

The video is silent; the contents of the phone’s screen and images in the squad car’s rear-facing mirrors were blurred prior to release.

The driver shows the phone yet again to the passenger; the passenger then appears to take out his or her own phone.

At 2:53 into the video, the car starts to move forward. It accelerates quickly as the driver appears to grab the microphone to a police radio.

At 3:16, the car T-bones another squad car. This screen capture shows the split second of the impact: 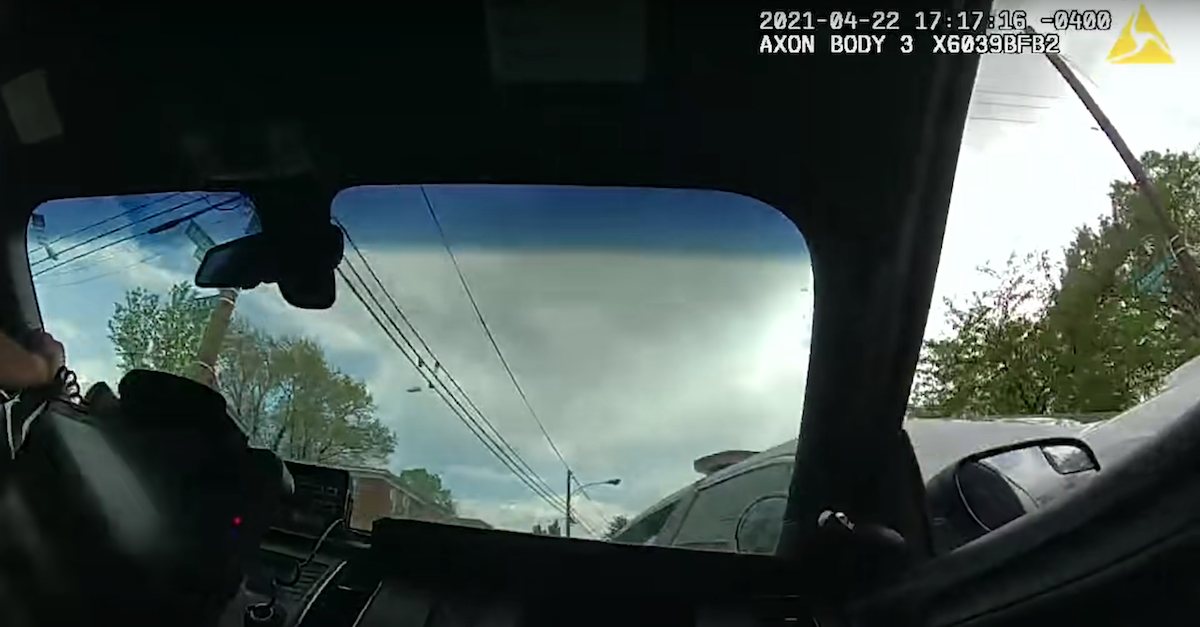 Airbags deploy. The windshield is shattered. The audio comes on. 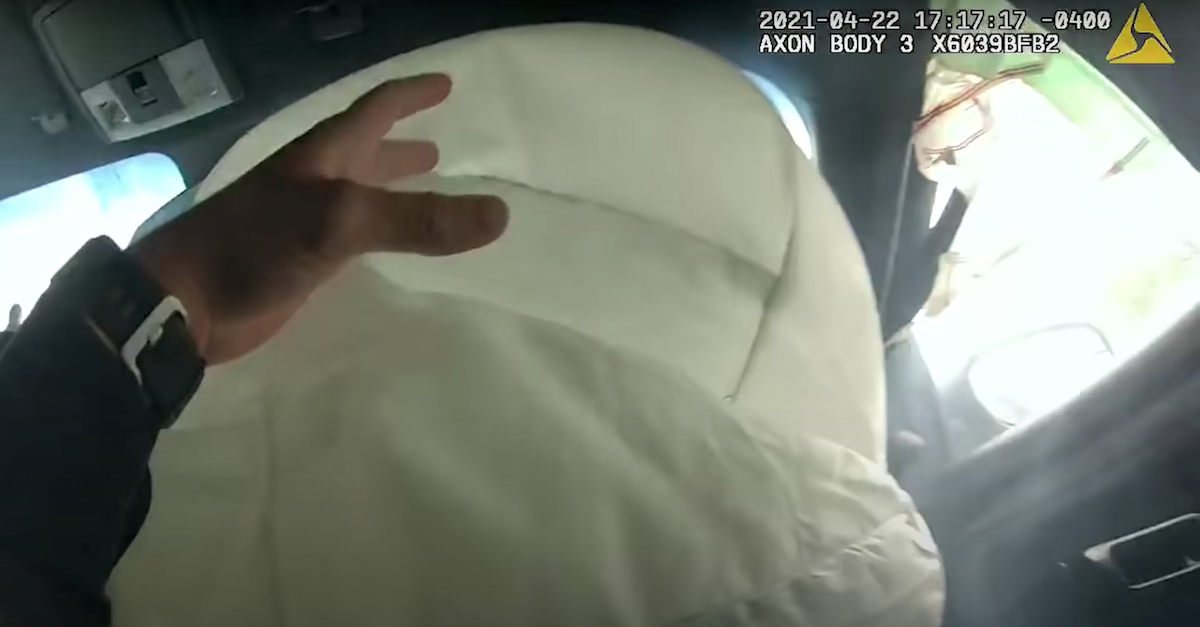 The officer wearing the camera exits the car and spins around several times to survey the damage while walking across the street. 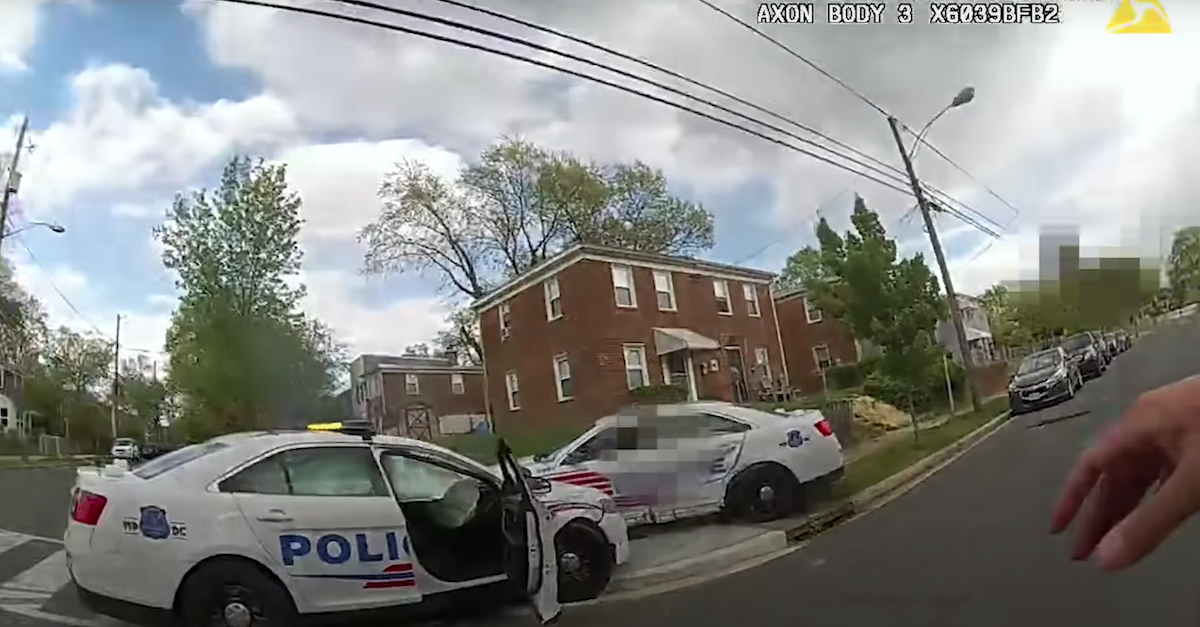 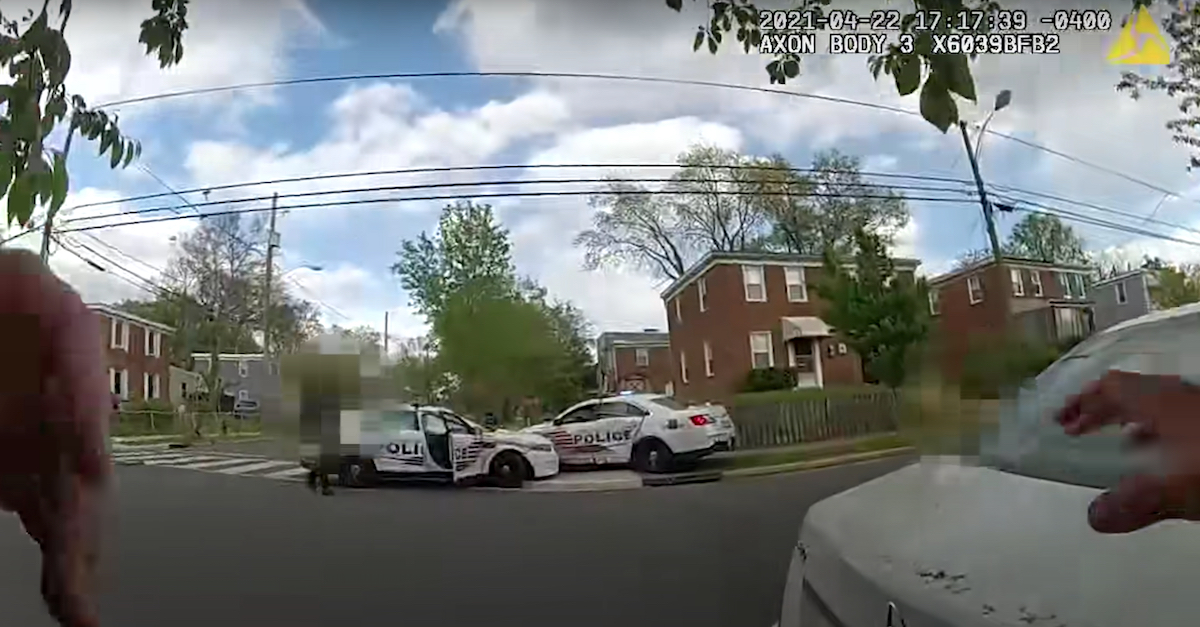 An NPR report said the cars reached 60 miles per hour.

NPR also noted the apparent cause of the lack of sound through most of the recording. Washington, D.C. police body cameras are, in essence, always capturing video in an internal memory bank. However, they do not begin capturing audio until they are activated. At the point of activation, the camera permanently saves the preceding two minutes of video — but not the audio — which occurred prior to activation.