U.S. Banker Kills Hotel Worker During Family Vacation in Anguilla — What We Know So Far 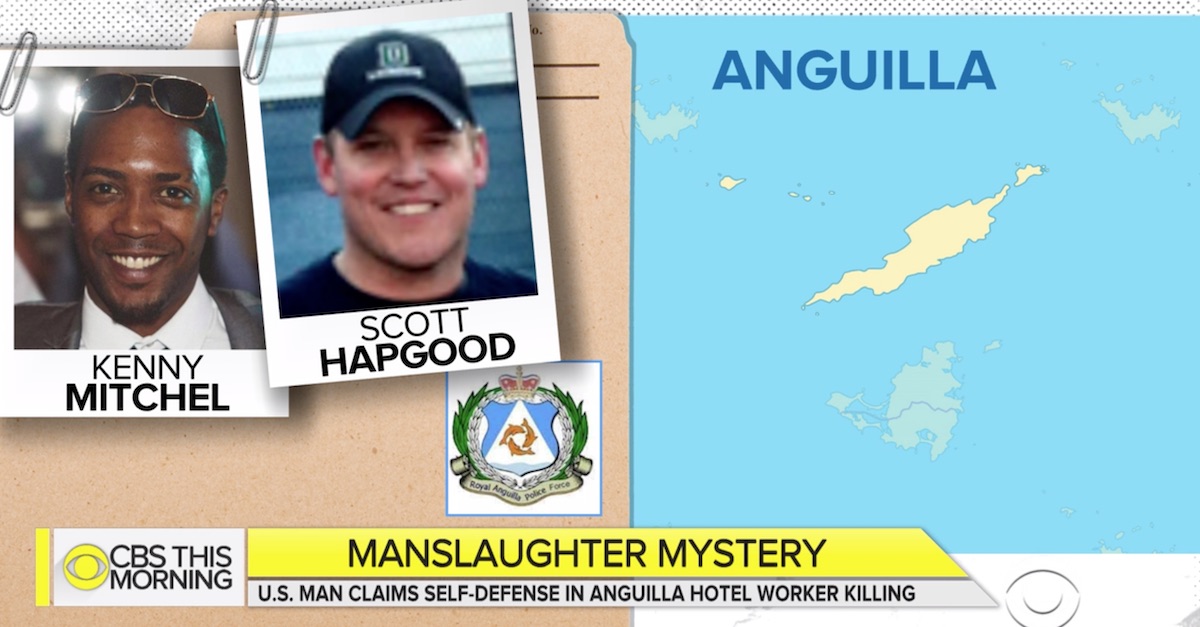 A shocking and mysterious killing has rocked Anguilla and raised tensions between locals and tourists. A 44-year-old American investment banker from Darien, Connecticut was charged with manslaughter in the death of 27-year-old father and hotel maintenance worker Kenny “Mylez” Mitchel.

Gavin “Scott” Hapgood was staying with his wife and children at a five-star hotel, ostensibly to enjoy a family vacation in the Eastern Caribbean. Somehow, Kenny Mitchel ended up dead. And, much to the dismay of the roughly 15,000 who live on Anguilla, Hapgood was released on $74,000 bond and has left the island.

1. Hapgood’s Children Were in the Room at the Time of the Killing

Anguilla police have not yet released a lot of facts about what led to the killing, but they have revealed Mitchel’s cause of death. According to police, they received a phone call on April 13 after 4 p.m. altering them to the killing. It wasn’t specified how much time elapsed between the death and the making of the call. Police haven’t said who made the call either.

Mitchel died from “prone restraint, asphyxia and blunt force trauma to the head, neck and torso,” police said. Authorities also said Hapgood’s young daughters were in the room when the killing occurred.

Hapgood is a successful financial advisor at the Swiss investment banking company UBS. A representative for the company has responded to the news of the manslaughter charge by saying there couldn’t yet be a response, as this is an ongoing criminal case.

“We are aware of the recent events in Anguilla and are following the situation closely. As you will appreciate, it would not be appropriate for us to provide any comment in relation to an active criminal proceeding,” the representative told Page Six.

When news of Mitchel’s death first broke, it was said that Hapgood called the front desk and specifically asked for Hapgood to come to the room. That claim about what occurred can be seen on the GoFundMe campaign started in Mitchel’s memory.

A young man named Kenny Richie Marty Mitchell known as Mylez was murdered by an American tourist #GavinHapgood from Darien,CT.

Here is what we know, Mylez was the maintenance man for the hotel. For whatever reason Gavin Hapgood called the front desk of the hotel and it has been said from hotel sources, he asked for Mylez specifically to come to his room where he, his wife and three children were guests. Once inside that room, Mylez would never leave alive.

Mitchel’s uncle Victor would also say that his nephew “was just not a person who’d give anybody problems.”

Mitchel’s brother, Kimon, said Kenny “would never try something that dumb. Even if it was possible he would not.”

He also said that Kenny especially wouldn’t have done something this reckless because he was required to wear an employee t-sirt and name tag.

A PR firm in Hapgood’s camp is disputing this narrative. They say the alleged phone call to the front desk is false and that an armed Mitchel showed up at the family’s hotel room “unannounced” with an intent to rob them. Thus, they claim, Hapgood acted in self-defense.

“Neither invited nor expected, the worker showed up unannounced in uniform at the hotel room, claiming he was there to fix a broken sink before carrying out his sudden, violent attack on the family,” Hapgood spokeswoman Kelcey Kintner claimed in a statement released Thursday. Kintner said that Hapgood was defending himself and his family.

Attacked without warning in his family’s hotel room by a maintenance worker who was armed and demanding money, Scott Hapgood acted in self-defense to protect the lives of his young daughters and himself.

Despite false reports to the contrary, the Hapgoods never called maintenance. Neither invited nor expected, the worker showed up unannounced in uniform at the hotel room, claiming he was there to fix a broken sink before carrying out his sudden, violent attack on the family.

A dedicated father and husband and respected member of his community, Scott and the members of his family have been traumatized by the assault they survived and are thankful to be alive.

It was also claimed that Hapgood had “to seek medical attention to his wounds from the altercation, which included multiple cuts from the knife Mr. Mitchel came bearing.”

4. Anguilla Residents Are Angry Hapgood Was Allowed to Leave the Island, But His Lawyer Says He Will Return as Ordered

Hapgood was arrested and charged with manslaughter, but was eventually released from Her Majesty’s Prison on $74,000 bond. It happened after Hapgood had initially been denied bail.

Police attempted to reassure angry locals that Hapgood’s release was above-board and that he will, indeed, stand trial.

“We are not shrouding the case in mystery we are bound by rules and so are others on what can be said. We have charged a man in connection with the death of Mr. Mitchel. The court granted bail and we now prepare for the Court process and eventual trial,” the Royal Anguilla Police Force said on social media.

“It’s clear that people are angry over this situation,” Dick said. “They are very emotional about it. The police continue to perform in a very professional manner, and they allow the law to take its course.”

According to NBC New York 4, Hapgood has never before been charged with a crime; police haven’t said whether Mitchel’s had a criminal record.

The GoFundMe started for Mitchel said that he and the mother of his child “both migrated to Anguilla.”

“Mylez from Dominica at a very young age and Emily from the UK,” it said. “They found love on Anguilla and together had a beautiful baby girl named Mylie. The Anguilla people and the tourists who encountered the Mitchell’s fell in love with the family. We are broken that their lives fell apart on our Anguilla, tranquility wrapped in blue.”

Hapgood’s lawyer Thomas Astaphan has said that his client “has every intention to return to Anguilla to clear his name.” Hapgood is expected back in Anguilla on Aug. 22.

Editor’s note: This story was updated after publication to clarify the cause of death.