‘I Had to End It’: Trucker Reveals He Intentionally Crashed into Fleeing Murder Suspect’s Pickup, But Now He May Need a New Big Rig

Just one week ago, a murder suspect led police on a lengthy chase for more than an hour in California, but he failed to get away because a truck driver wouldn’t allow it. That truck driver, Ahmed Shaaban, now says that the jarring collision at an intersection in Pomona was by design.

In case you missed the story, 35-year-old Michael Caleb Reed was wanted for shooting and killing 40-year-old Michael Lewis on March 28. Police attempted to take Reed into custody on April 6, but Reed—despite having a passenger in his vehicle—decided to make a run for it. In the end, it was Shaaban who put a stop to an often low-speed pursuit that passed through shopping center parking lots and at least one gas station. At other times, the chase reportedly reached speeds as high as 75 miles per hour.

At the 17:50-mark in the video above, you can see that as soon as the suspect turned left out of a gas station, the truck driver accelerated and crashed into Reed’s pickup, causing air bags to deploy and leading to the suspect’s immediate arrest. For good measure, Shaaban then moved the truck forward and blocked most of the intersection. 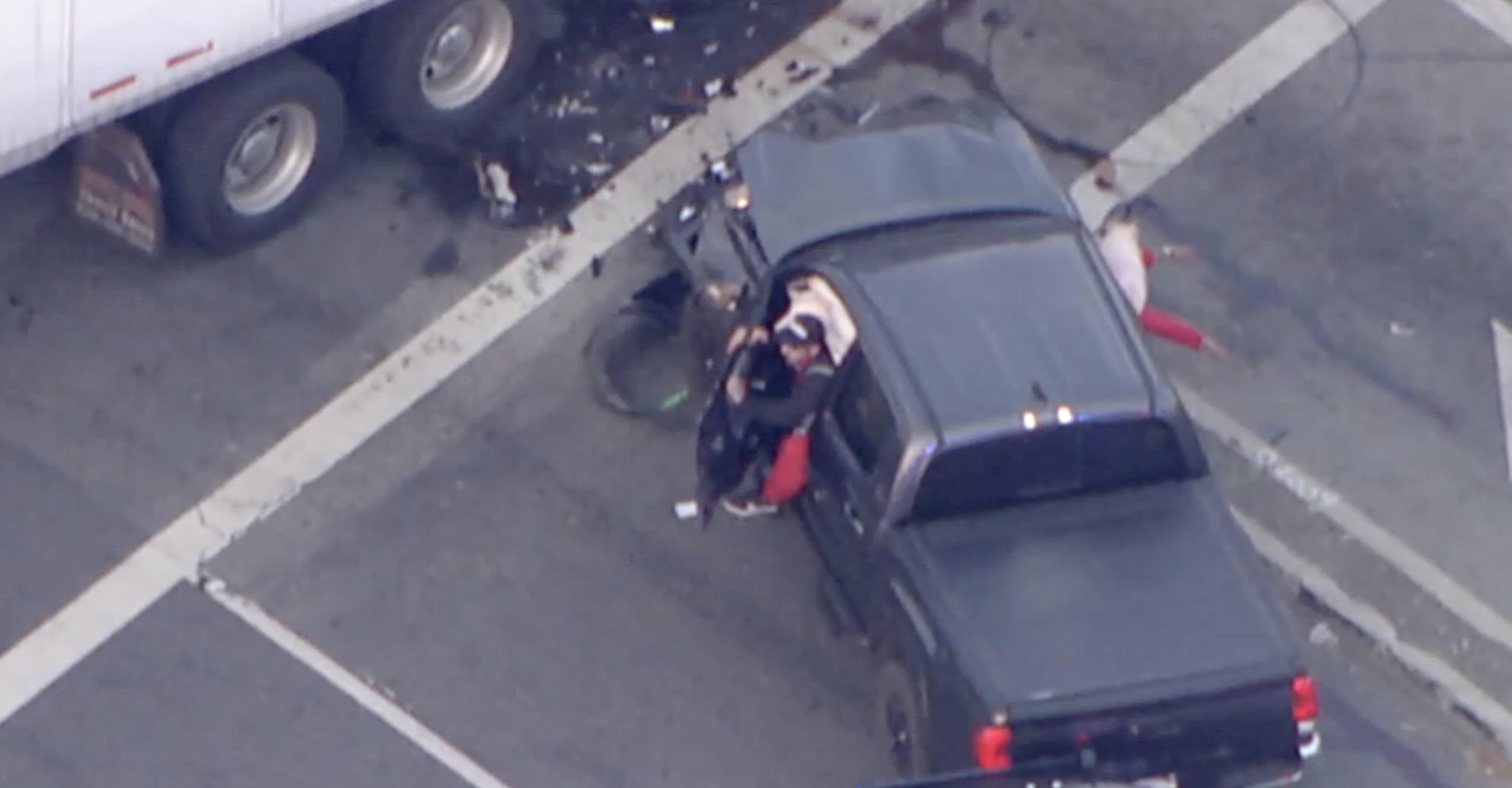 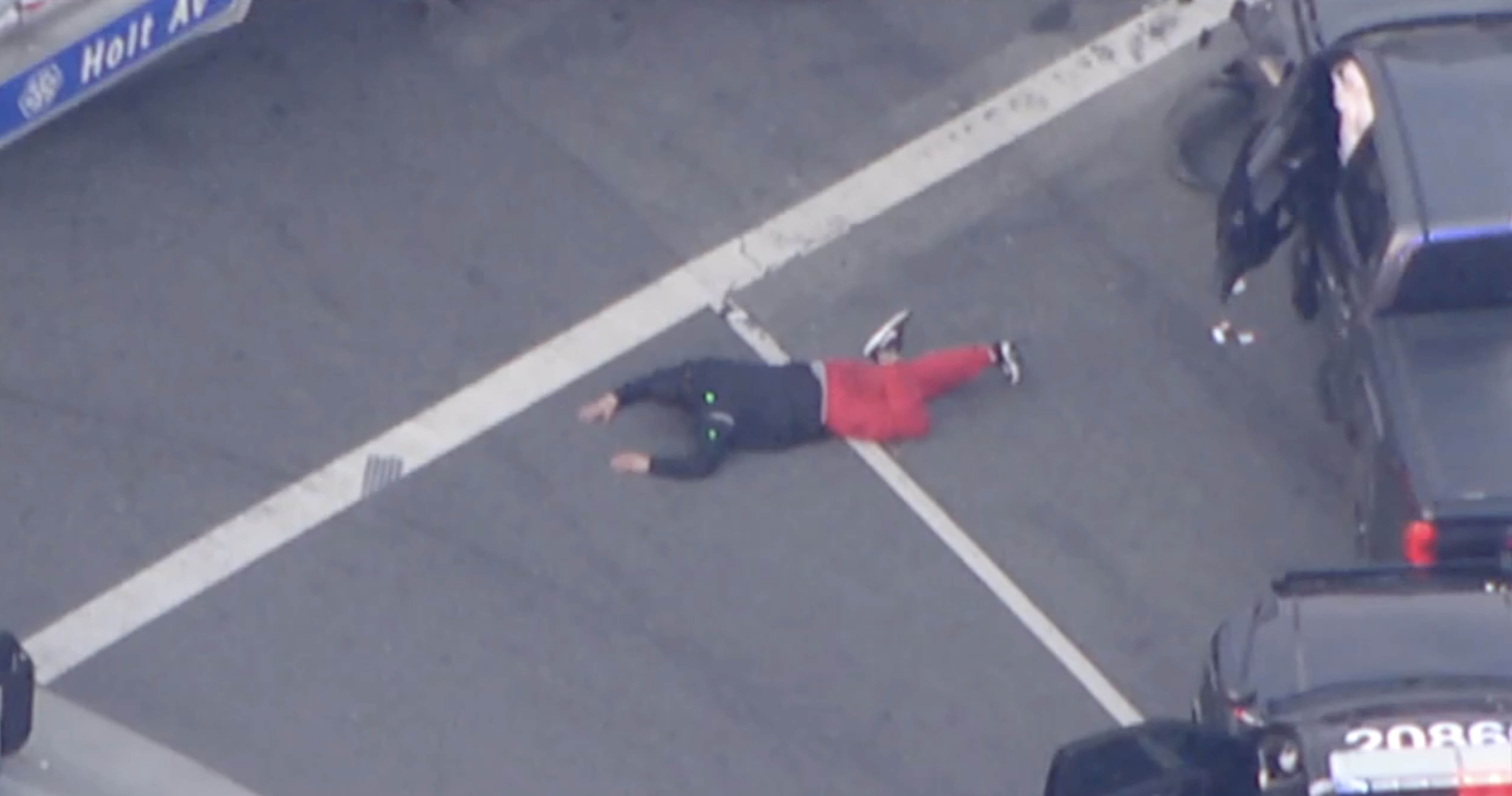 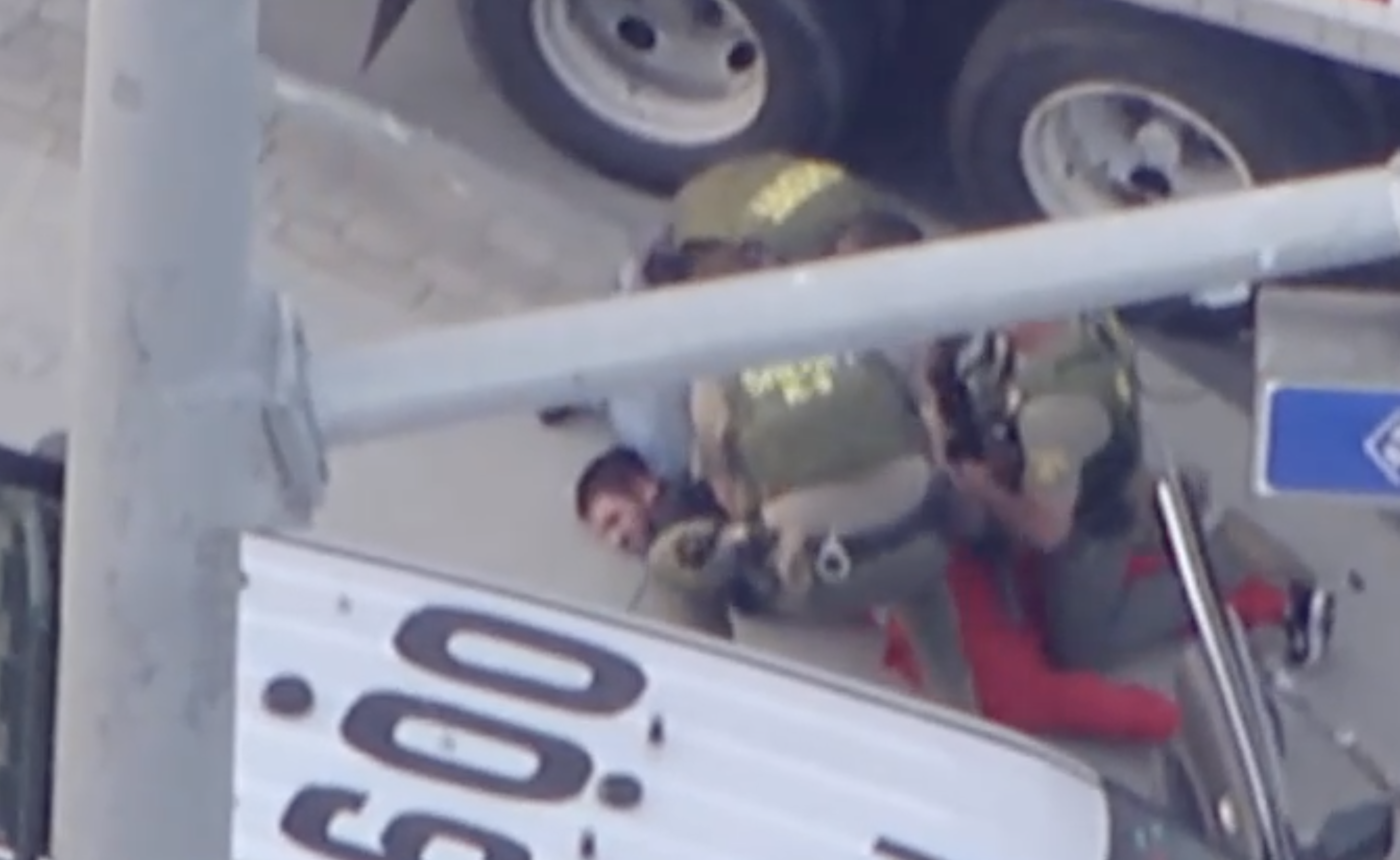 Law&Crime memorialized the immediate aftermath of the crash with a GIF, showing Shaaban walking off like this was no big deal and just another day at the office.

Shaaban now says that this crash was no accident.

The trucker said he was on the phone with a friend at the time and saw the suspect being pursued by dozens of police cars. Aware of the situation, Shaaban made the decision to accelerate and put a stop to the protracted incident. The trucker, a father of three, said that he feared Reed might kill someone else while trying to escape.

“If he passed, I would have blocked all the cops, and he would have run. The second I heard his engine, I floored my truck, and I hit him,” Shaaban told KGTV. “I had to end it before he killed someone or hit a car or hit a kid.”

And Shaaban did this despite possibly totaling a truck he recently purchased for $75,000. Although he does not regret his decision to stop Reed, Shaaban fears that the collision may not be covered by insurance since he intentionally crashed.

A GoFundMe campaign started by Shaaban’s wife Tracy Adler just four days ago — with the goal of raising $65,000 — has received more than $71,000 as of Monday morning:

I am the wife of the trucker that stopped the police pursuit that went across multiple counties and ended in Pomona on 4/6/2021. My husband Ahmed Shaaban owner of Slingshot Trucking Inc was driving to find a parking spot after our load was cancelled in Mira Loma. He saw the police pursuit happening and decided that he was in a position to help. He took it upon himself to attempt to block the suspect with no idea that the truck would actually plow right into our personal truck which significantly damaged it.

Ahmed is an owner operator that only recently bought this truck in November of 2020. This truck and job are our family’s lifeline.

He is a wonderful man that always goes above and beyond to help anyone in need: from helping put out fires with his own extinguishers in his truck to pulling other vehicles out of precarious situations.

We were encouraged to create a gofundme to help with the costs of either repairing our truck or if it is a total loss, getting a new one to replace it. Our lives are on hold now due to this incident, but Ahmed regrets nothing. God put him in the right place at the right time to be able.to do what other’s weren’t. He just didn’t want anyone to get hurt. He truly is a hero like everyone is saying.

Our family thanks you for your support.

Adler said in a new message on Sunday that the family is “speechless” due to the generosity of donors.

“Thank you so much for your support! Our family is speechless at the generosity and kindness that we have received. We are currently waiting to hear back from the insurance company and praying that our truck isn’t totaled,” Adler wrote. “We appreciate everything that this beautiful community has done to help our family. This truck and company is our family’s lifeline so we are praying to be back in business sooner rather than later since the bills are starting to roll in. Thank you again for everything!”