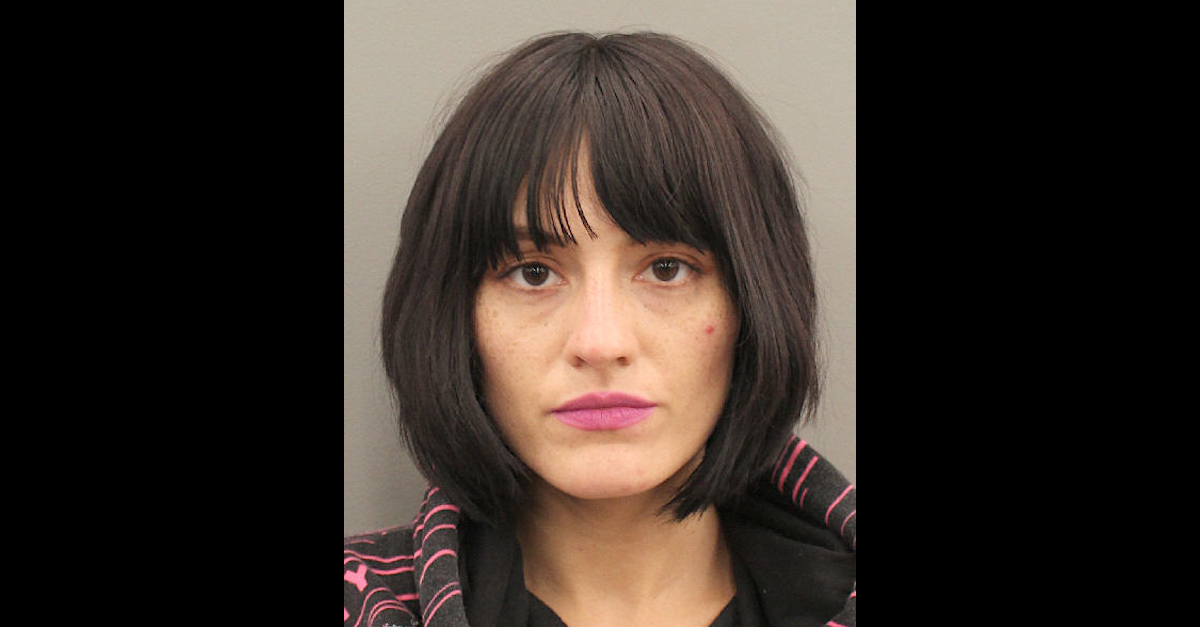 A Texas woman is charged with going on a crime spree — some of which she documented on social media — and then leading police on a high-speed chase that went on for approximately 80 miles and reached speeds of 120 miles per hour. That’s according to court documents filed in Harris County, Texas Criminal Court.  Nina Amber Howell, 35, who also goes by Nina Howell Allemant, was arrested Thursday night on accusations she stole an SUV from a car dealership after pretending she was taking the vehicle for a test drive.  She’s then accused of vandalizing car dealership property.

According to the charging documents, Howell on March 9 test drove an orange 2020 Mitsubishi Outlander worth approximately $30,000 from a Carmax location in Cypress, Texas and never returned the vehicle. Because Howell provided the dealership with a copy of her driver’s license and phone number, officers with the Harris County Sheriff’s Office (HCSO) were able to quickly confirm her identity. When an officer called Howell to ask her about the vehicle “she denied it” and told the officer to “stop calling her.”

When police searched Howell’s Twitter account, they noted that she had twice tweeted about Carmax on that same date — March 9.

The second actually specified the Cypress Carmax location with a picture of a computer screen with two dropdown menus for “Application” and “Location.” Under the former, the word “MARS” was selected, and under the latter “CARMAX – CYPRESS FAIR” was selected. The tweet was captioned: “The fffffuck @Spacex @MAVEN2Mars @BoredElonMusk – even at Carmax? EW.”

Howell also posted several videos to her Twitter account that appear to be evidence of alleged criminal mischief. Court documents state that Howell on or about April 21 damaged “tangible property, namely two motor vehicles, owned by Brad Stapp” by “marking the motor vehicles with a permanent marker.”

On April 22 at 4:18 a.m., Howell posted a picture of a white Ford Mustang at a Planet Ford dealership that had been vandalized with writing in black marker on the front hood. (Brad Stapp may be the Operations Director at the Planet Ford in Houston.) The While most of the text is not legible due to the angle of the picture, the message ends with the words, “Fuck you!” then a drawing of a heart and the word “Moms” as if to read “Love, Moms.” Howell is a mother of two.

She also posted a video of herself sitting inside of a vehicle filming the Planet Ford dealership from about a block away and narrating her alleged plans.

“So I drove up here. My intentions were to destroy the planet. That one, right there,” she said while focusing the camera on the large globe in front of the dealership.

When police caught up with her later in the day she led officers on a protracted high-speed chase, according to a summary of her bail hearing from Friday. A magistrate judge said there was “clear and convincing evidence” that Howell was indigent and could not afford to pay any amount for bail but also reasoned that she presented too great a risk to be released.

“This D vandalizes a car dealership then leads officers on a 90-120 mph chase that lasted 77 miles in a stolen car,” a magistrate judge wrote. Officers had to deploy both stop sticks and a PIT maneuver to disable D’s vehicle. D refused to comply with any officer’s commands. Refused to provide PTS with any info. D had continual outbursts during court. D refused to comply with this court’s orders. This behavior poses an ongoing threat to community safety. D’s unwillingness to comply indicates that D is a likely flight risk and is likely to continue to engage in behavior that will lead to her arrest.”

The defendant is charged with criminal mischief (for allegedly writing on the vehicle), felony theft (for allegedly stealing the other vehicle), and evading arrest or detention with a motor vehicle (for the police chase).  According to court records, the police noted the defendant also appeared to be upset about a family law situation, as evidenced by a tweet they uncovered which showed court papers in the matter.

Videos obtained by a private investigator and subsequently shared with Houston NBC affiliate KPRC-TV suggested the defendant had an “unknown vendetta” against some of the the businesses she targeted, a Friday evening television report indicated.

Read some of the charging documents below.

Statement of Facts by Law&Crime on Scribd

Bail Order by Law&Crime on Scribd